Review The Great Jahy Will Not Be Defeated! 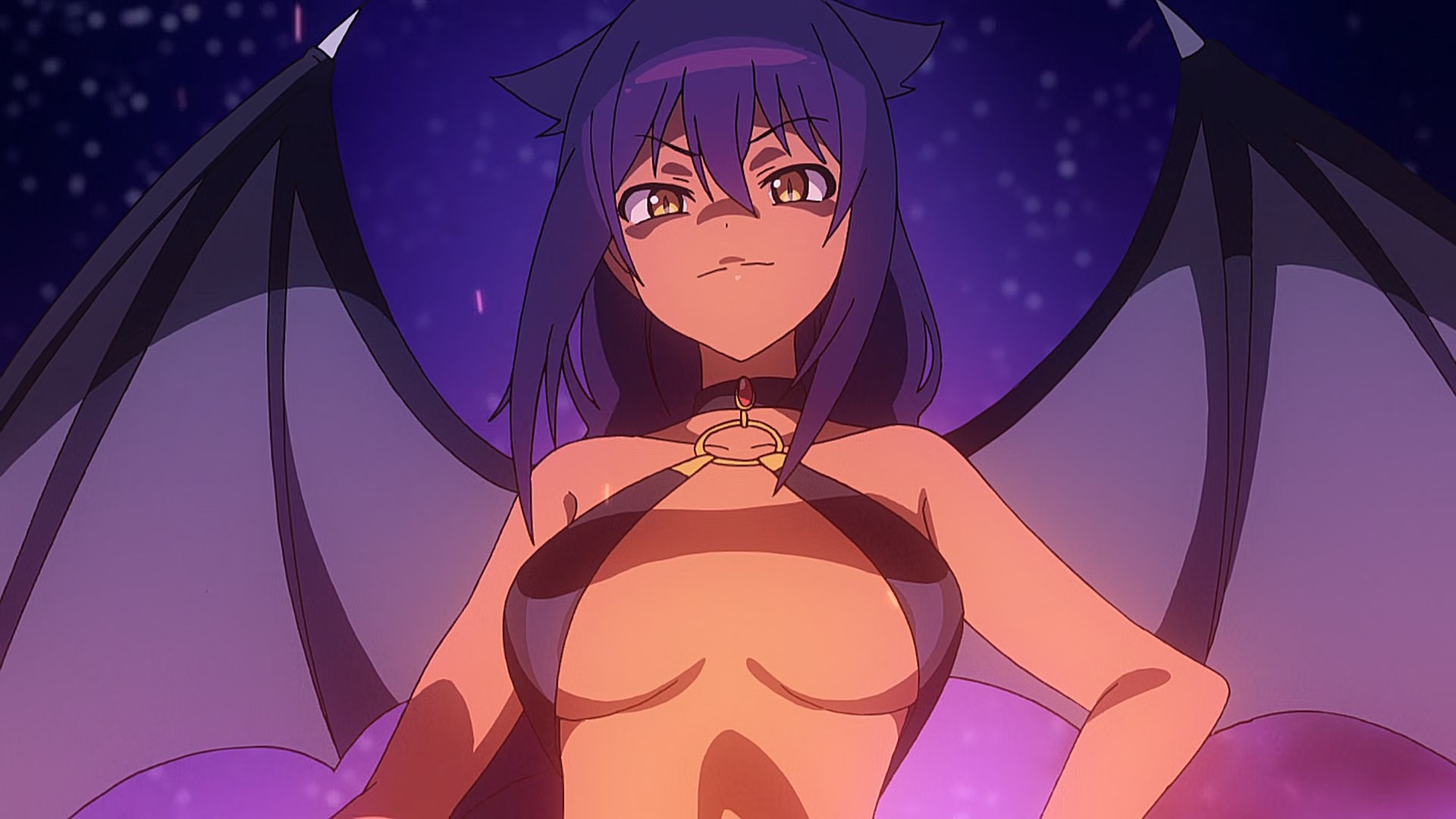 The Great Jahy Will Not Be Defeated! which also goes by the name Jaha-sama wa Kujikenai is a supernatural comedy series that was first released in the summer 2021 season and is another SILIVER LINK works.

In a dark realm far away lies a demon by the name of Jahy who is second in command of the entire realm! Ruling others with an iron fist and domineering personality her world comes crashing down when a mysterious magical girl comes along and smashes the big mana crystal that keeps the dark realm together. Destroyed but not defeated Jahy must deal with more mundane problems in the real world like a lack of a/c and paying rent on time to her greedy landlady! To make matters worse, she needs to make ends meet by working in a mundane pub!

This does not phase her as Jahy secretly schemes to restore the demon realm to its former glory! But can she really pull it all off in her weakened state and what will she do once she is confronted by her arch-nemesis the mysterious magical girl? 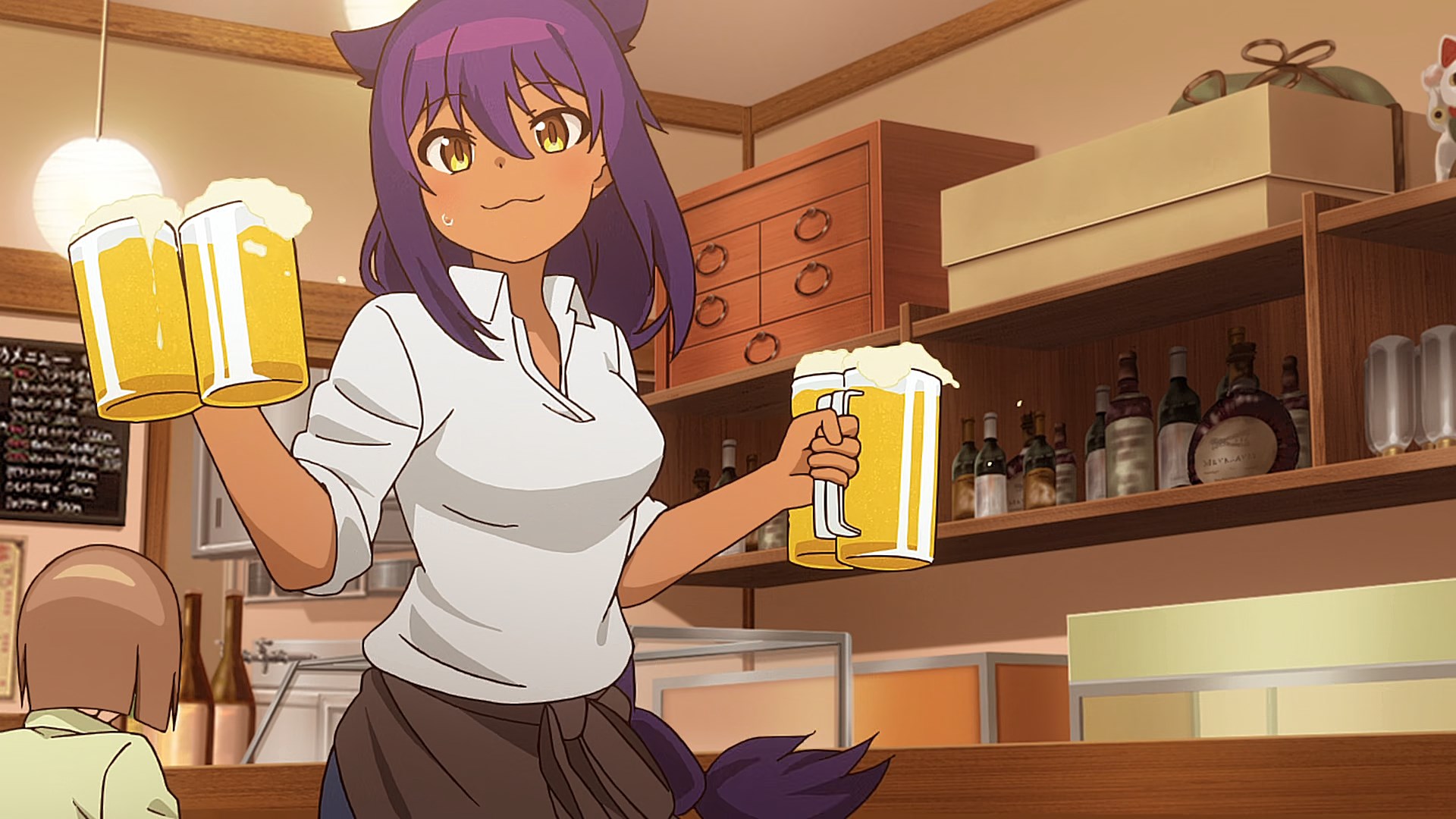 If the synopsis wasn’t clear enough this anime is a pure comedy of the simple kind and isn’t something you are supposedly to take seriously. This is a show that is driven by its cast of wacky characters who all have their various quirks that makes them both funny and endearing.

For example, we have the great Jahy who attempts to carry a veneer of class and authority but is actually a terribly insecure girl that is afraid of being shown up and is not beyond lying (terribly I may add) to hide her glaring shortcomings. Naturally she falls into numerous predicaments where her flaws are painfully exposed and the stuff she gets up to in digging herself out the hole are funny to watch. Whilst the comedy is not sophisticated by any means (it is rather childish actually) I never got bored with these comedy moments. She is essentially the driving force to this series so if you like Jahy then you will like the show and with her having a rather simple and predictable personality it won’t take long before you work out whether you like her or not. 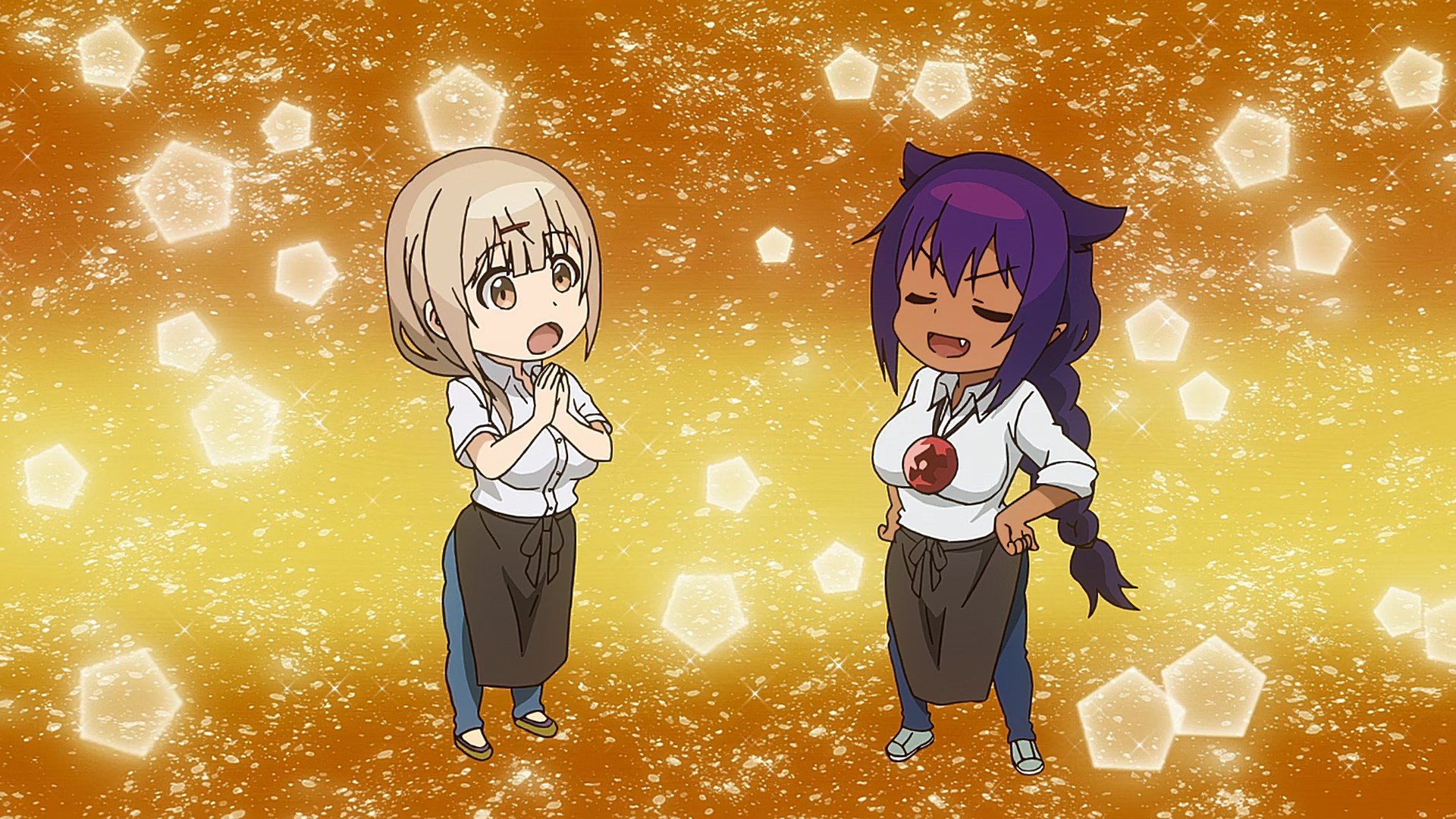 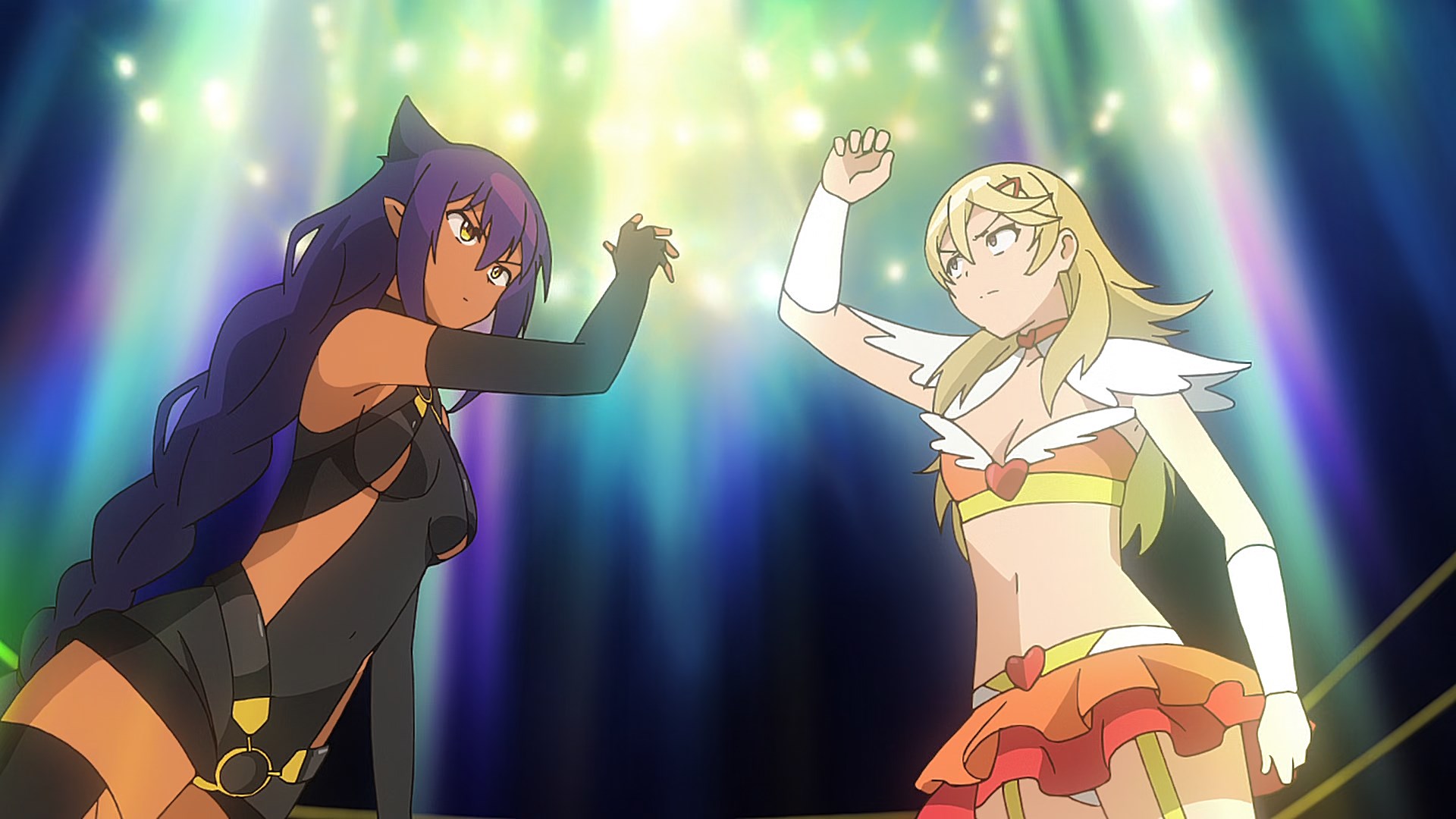 ​
This is not to say she is the only funny character as the rest of the cast also has their moments. The other big characters are Jahy’s landlady and boss who both have their moments of comedy (and madness) also. Both these girls naturally take a liking to Jahy but the calm and happy demeanour of her boss means she often acts as the voice of reason (there is not much reasoning amongst this cast) while her landlady is more impulsive and temper driven. With Jahy’s pride and her superiority complex against humans she naturally comes to blows with her landlord who is not much different to her in temperament. 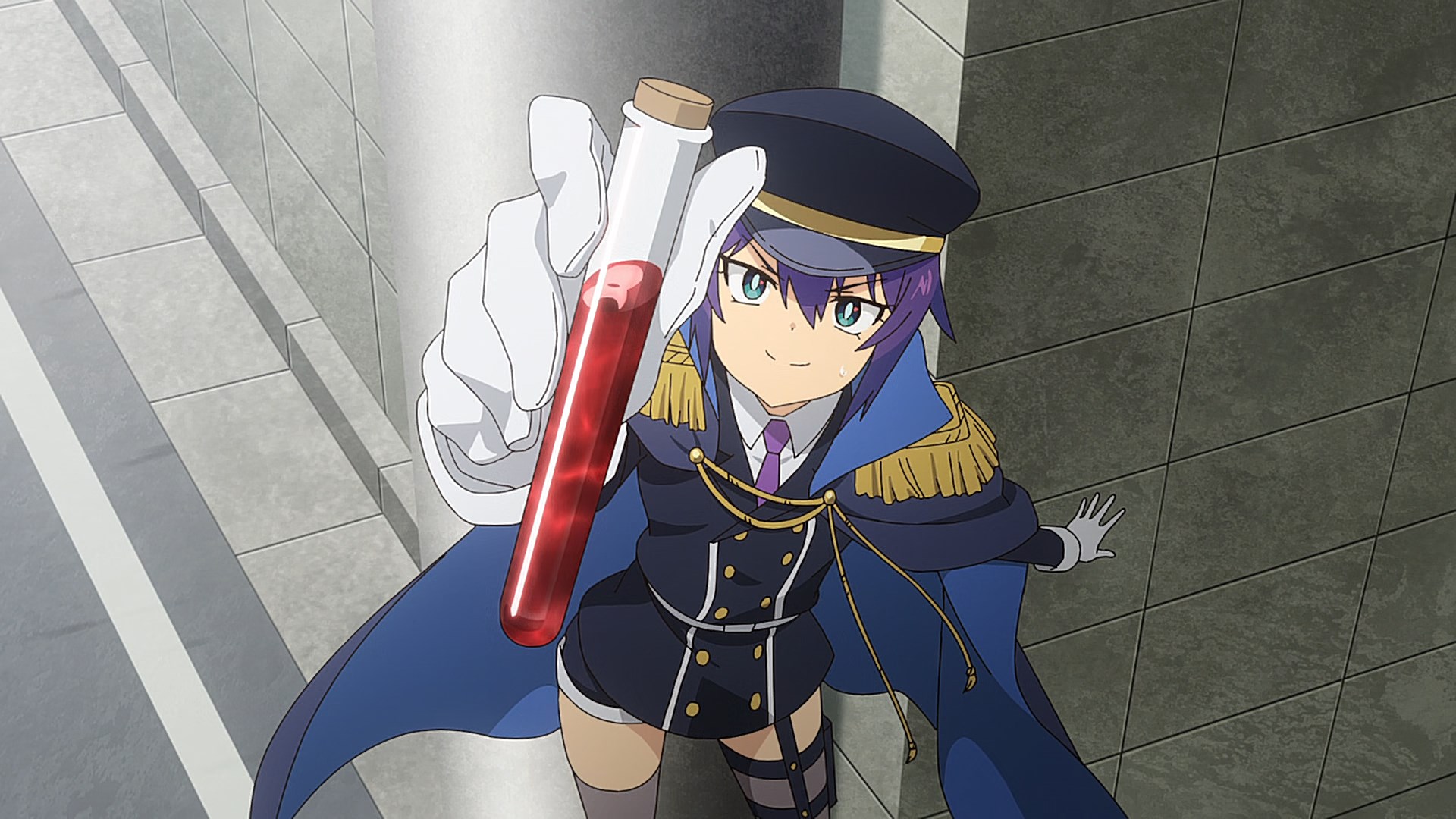 Beyond this main cast the supporting cast is also strong and it is likely you will take to one (or more). If I am honest a lot of them are pretty insane in their own ways with more than one character exhibiting some masochistic tendencies. It is not just their personalities that are likeable but the relationships they form with Jahy or other characters that often leads to some very amusing and wholesome moments. This is especially so in the later parts of the show when the entire cast is assembled.

This series does not hit the mark all the time though and I must say the number one demon was rather underwhelming. The jokes and gags that centred around this character was not very funny to begin with and it quickly got repetitive. Fortunately, they were not a main character so it was no biggie and by that point of the anime there are other players who can cover up this shortcoming. Speaking of shortcomings don’t expect to see a whole load of character development and growth in this show outside of Jahy is limited. This lack of growth does mean that there is a chance you may grow weary from some of the gags told in this series as the personalities don’t change only the scenarios. 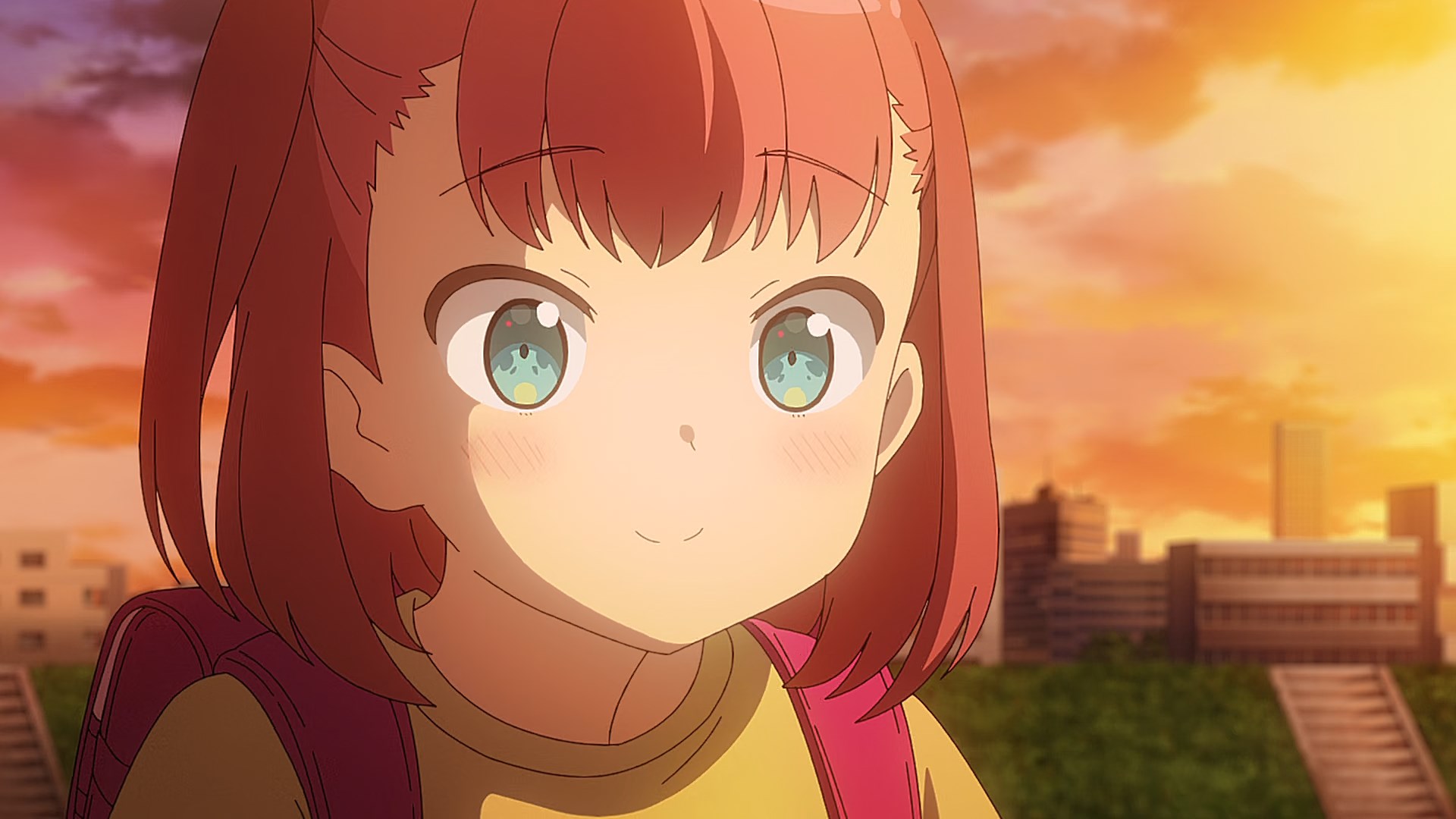 Speaking of scenarios, in terms of plot this basically covers the daily problems of Jahy and her quest to bring back the dark realm. In many ways it runs like a slice-of-life show albeit one that doesn’t take itself too seriously. It is a story that is told at a relatively pedestrian pace so if you expect quick plot developments then you will be disappointed. It isn’t the main purpose of the show though and with the amount of comedy and crazy moments this show throws at you it is a point that is easily overlooked.

In terms of ending, things are wrapped up fairly tight and in the midst of some rather absurd scenes we do get a final explanation as to what happened in the early moments of this anime. This explanation also gave us a nice insight into the mentality of certain characters giving us a good idea on why some of the early craziness came about. It is not earthshattering so don’t expect greatness here but I did think it ended well enough and more importantly, at the right moment as going further with this anime’s setup would have meant the shows antics would have gotten old.

Animation is fairly solid but never outstanding. There are scenes when the animation quality takes a dip and those lapses increase in frequency as the series progresses with moments when the character modelling look almost as wonky as the character’s personality! It is never bad though and with this being a simple comedy show it is never the main focus of the anime.

The animation in the opening and ending sequences are stronger and all of them, with their striking colouring schemes, are delightful to watch. Music wise there is greater variation in quality and I felt the first OP/ED pair was better than the second set. I particularly liked the first opening beat "Fightin★Pose" by Yui Ogura which was a great way to kick off episodes. Both ending themes were good with the first "Tsumari wa Itsumo Kujikenai!" by NEGI☆U edging it although I did still like "Pedals" by Miho Okasaki. The second opening "Seikatsu Konkyuu Dame Dinero" by Sumire Uesaka was the weakest of the lot.


The Great Jahy Will Not Be Defeated! Opening - Fightin★Pose by Yui Ogura 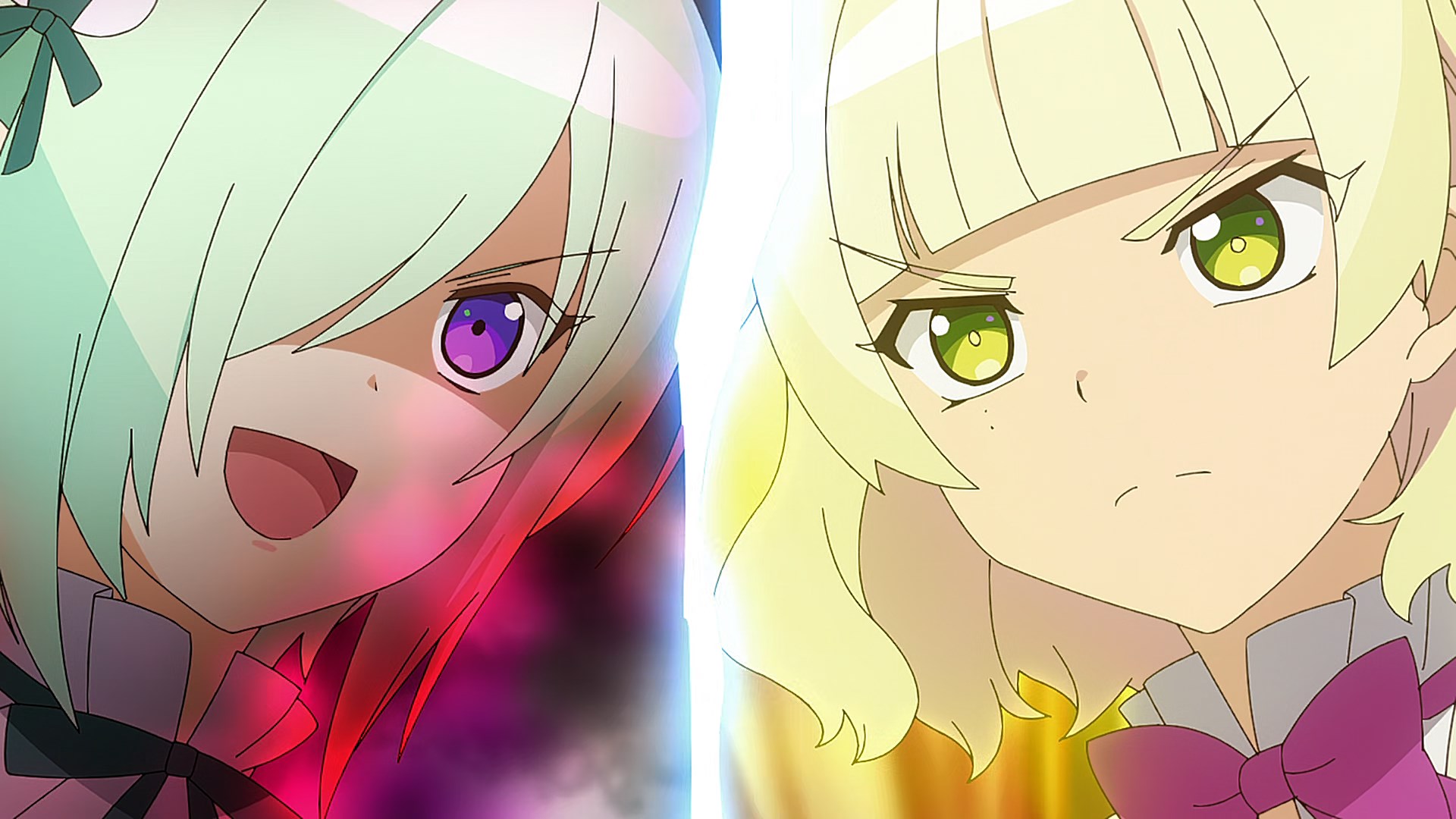 If you want a series where you can switch your brain off and just enjoy the ride then Jahy is certainly a show that can fit that bill. Don’t expect any sophistication or depth in this series as it is a simple comedy with characters that are off the wall. If you want some deeper (even on a comedy level) then best to look elsewhere as you won’t get that here.

Whilst the story is slow of the mark and can often meander along getting distracted with silly antics that occur on a very frequent basis this can easily be overlooked by the fact the cast from The Great Jahy are all very likeable in their own ways. What is more, as the series progresses things generally gets better as the cast expands and the interactions widens meaning jokes get less repetitive as there is more variety.

If you like cute girls and wholesome moments then you will particularly like this anime as for all Jahy’s swagger, on a fundamental level she is a kind sweet girl. This innocent nature is not just limited to Jahy however as there are several “villains” with some very redeeming qualities and that’s before we even consider Jahy’s “underling”. In the end I would recommend this anime if you like your characters to be a little crazy and are looking for something to unwind or settle down after watching some heavy or dark anime series.

Story 7 – In terms of overall story it won’t win awards but the important thing is the various scenarios and antics Jahy and her gang find themselves in. More often than not these set-pieces work. What was also nice is the fact most of these good moments don’t rely on the standard slice-of-life tropes. It meanders but there is progression and things do wrap up nicely and at an appropriate time.

Characters 8 – Biggest strength of the show. Key element in enjoying the series with the anchor being Jahy herself. If you like Jahy then you will like the show it is that simple. Watch an episode or two, if need be, to decide. The other characters are generally very solid with only one weak character in the entire cast.

Animation 7 – Good for the most part but there are a number of moments when things do go south. This only increases in frequency as the series progresses. Fortunately, the opening and ending sequences are of a higher standard and the musical score is strong also. The music used in the episodes were also notable in generating the appropriate moods.

Overall 7.5 – The Great Jahy will not gain universal appeal and its simple characters and storyline means this will not be for people who want more substance from their anime. If you don’t care about mindless thrills then this will be a series that will be appealing to you. Most of the girls in this series are pretty crazy and dumb plus the chemistry they have make this a comedy that hits the mark on a consistent basis. This is for those who like simple comedies with a decent number of wholesome moments. 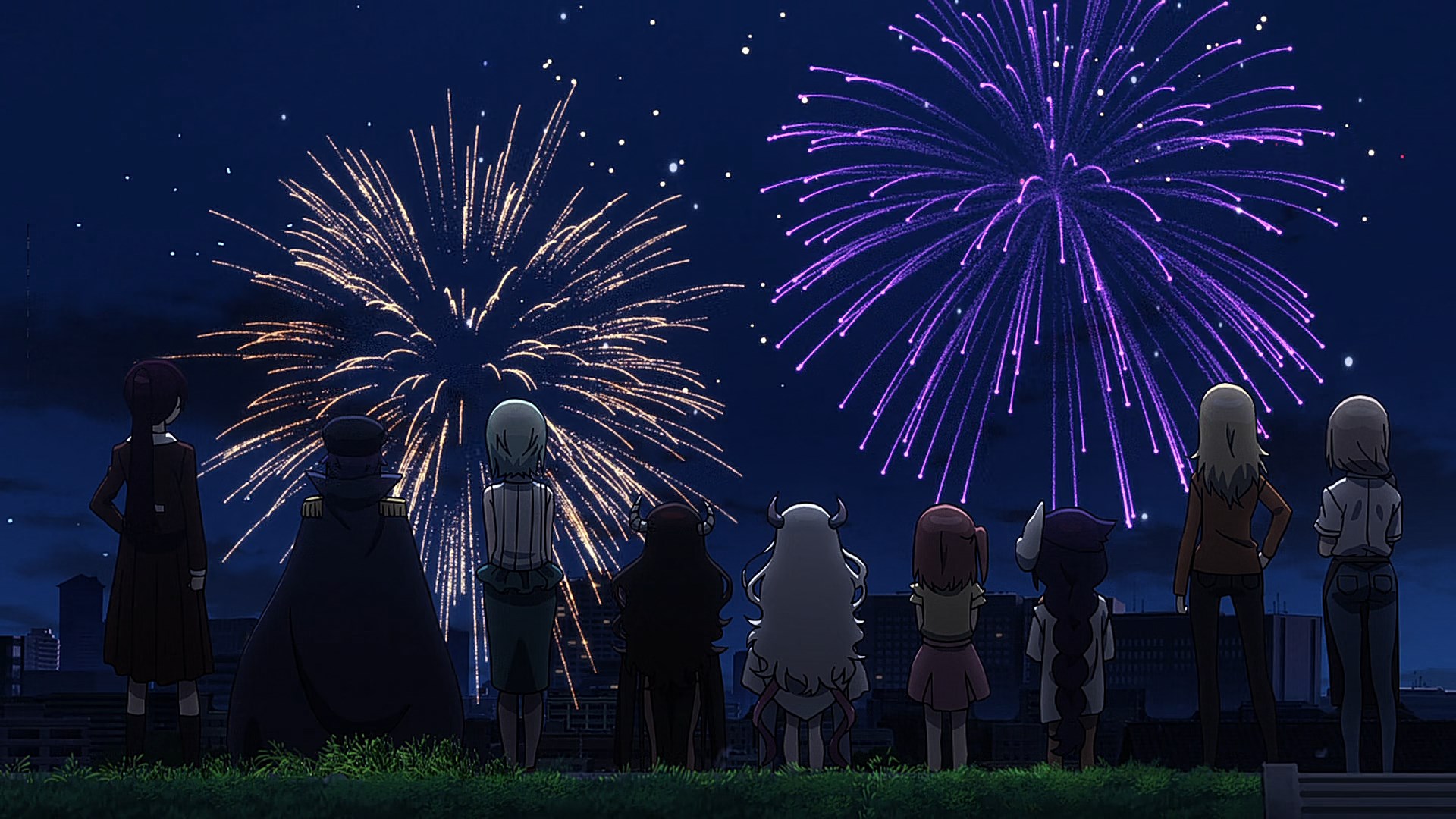 The gallery for Jahy-sama is truly out of this world and won’t be defeated in sheer size! If you are brave enough to venture then take a gander and bask at the truly glorious size that is the dark realm! 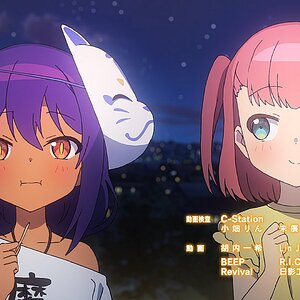 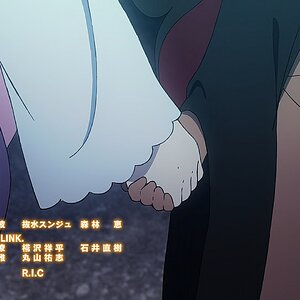 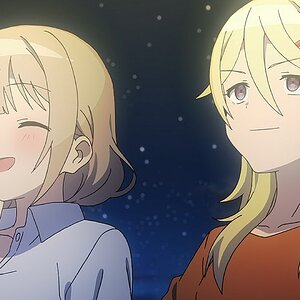 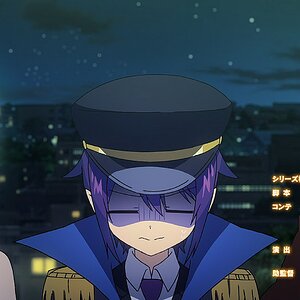 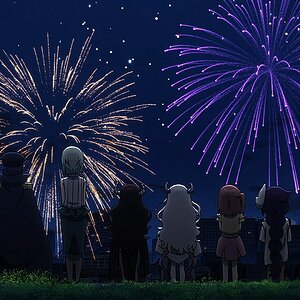 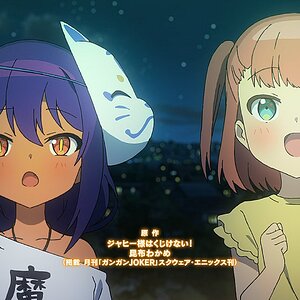 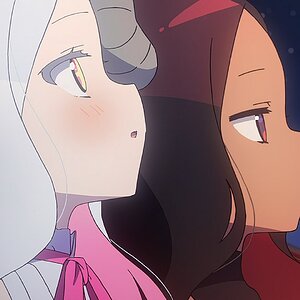 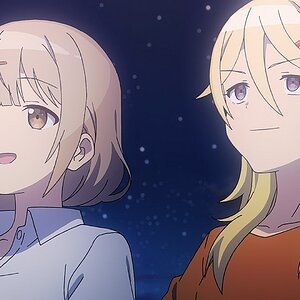 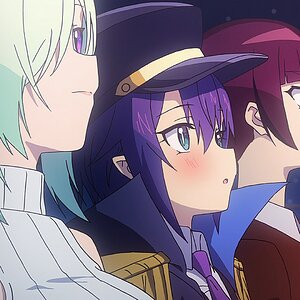 Jahy-sama Will Not Be Defeated!