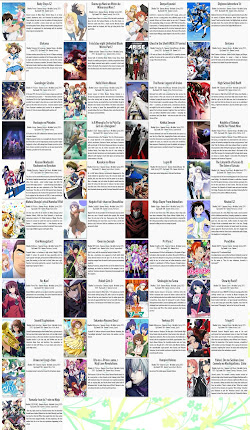 Sempai
Movies:
NGNL ... Oh Please! be soon! I don't care if it might suck!

Seitokai Yakuindomo, You know how it is going to end (if you have seen the other seasons endings). But, I watch it for its craziness

Series:
Tsurezure Children, I don't care if it says Tsure-dure, I've known it as Tsurezure! (simply alternative titles). It will be fun and awkwardness and will have almost every single overly thought cliche! But that is why I love it! It knows what it is!!

Made in the Abyss, Don't know it, but it looks fun. All the reasons I need.

Hajimete no Gal - Centaur no Nayami - Aho Girl: I remember the series... and I will try watching... but I don't remember why I stopped reading them...

Sempai
Action Herioine... another 'save the town' storyline like Sakura Quest.... seems this could be supported by the national relief fund? ^_^ It does seem to be a bigger problem in Japan than here.
I heard of the Ballroom anime before, so it's this summer.
Clione no Akari could have something in the name of mystery.
Fate/Apro..... again they use an esoteric term in a meaningless manner: steal a Holy Grail? obviously they don't even know what it means. :wacko: :wacko: :wacko: not that the anime might not be too bad, but why not at least look up the term and see what it means? Is this use of foreign words a Japanese thing? I've seen vids online indicating it is.... they put them on t-shirts without knowing WTF it means?! crazy. ^_^
Isekai Shoukodou looks like a mystery restaurant plotline??? odd... made me think of a couple of others, like that one in Paris or Italy? then the one named Bartender? I think it was.... which I liked..

the movie Mary to Majo no Hana could be interesting, hard to tell.... most of these descriptions are cut off in the summaries, which are rather long, OR some of them have no summary/description at all, so hard to tell, overall nothing seems new.. more 'retreads'...
THe Bresudo of Cyborg 009 actually sounds like the real thing.... but I extremely doubt they will 'go there'.

Not sure why Kimi no Na Wa is on the list of films... it's been out for over a year now, right?

AH HA! Another Magical Nanoha film... that whole series is well written/produced, animated etc.. IF you like that genre.... overall, it's the best in the genre I've seen, they must have had a good budget for the whole franchise... well, the later series especially, as it really looks 'rich'. Don't recognize the summary, so must be a new one?

Another film Kimi no Koe wo Todo.... something.. at least sounds a little different/intesting from the usual trope of HS girl...

Hard to tell with almost all of these, though some are continuations etc.... so already known... will need an update for the others that don't have summaries.

Shoukoku no Altair - YES! It won't be as pretty as the manga, but YES! (Seriously. One of the most beautifully drawn manga I've ever seen.)

Isekai wa Smartphone to Tomo Ni - This series is amusing in a lighthearted, hollowheaded sort of way. Total wish fulfillment fantasy, not very deep, but should be entertaining as long as you don't expect too much out of it. One of the few LNs I can think of that actually got an official english LN release before its anime adaptation.

Knight's & Magic - An Overworked Programmer and GunPla/Mecha Otaku has a fateful encounter with Truck-san and is killed instantly, reincarnating in a fantasy world with real mecha and magic. Another Isekai/Tensei wish fulfillment fantasy LN, but this one's a little deeper than In Another World with my Smartphone. Kinda doubting the series will catch up to the translations, but with any luck it'll get them an official localization.

Symphogear - Hibiki has a mission. That mission is to surpass giving K2 a haircut with a more awesome song than Radiant Force while riding a disabled spaceshuttle back to earth before suplexing it. Do I think she can do it? Maybe. <_<

gdpetti said:
Not sure why Kimi no Na Wa is on the list of films... it's been out for over a year now, right?
Click to expand...

gdpetti said:
Hard to tell with almost all of these, though some are continuations etc.... so already known... will need an update for the others that don't have summaries.
Click to expand...

Kouhai
hi guys, can someone told me when will start the 4th season of anime haikyuu?
WordPress Photo Gallery -Responsive Slider

mikejonson750 said:
hi guys, can someone told me when will start the 4th season of anime haikyuu?
Click to expand...

no S4 yet a new episode will be released in august 4, btw welcome to MA/FTV!

Sempai
The Summer season has already begun for many series.

NGNL ZERO the movie: I know, I know, How can I say something about it, without it having come out? Well... Previews and Trailers are the Spoilers of every movie... Especially when I've already read the novel part...
I'm going to pass on watching the movie.

Aho girl, I tried watching, but I did not see it coming that it would only be like 12-15mins per episode... and I can read the title, but the anime actually is showing it to be stupid. Like no comedy, just stupid, to the point of irritation.

Tsurezure Children: I like it, I don't like it also having only 12-15mins per episode, I find the animation to be half way, characters yes, animation amount for backgrounds and actual movements? NO.

My last hopes are on: Made in the Abyss, Centaur no Nayami & Seitokai Yakuindomo movie

It's all my personal say in the matter, so honestly, watch whatever you like/enjoy. However, my feelings for this Summer of anime series? Just... no...

Masich said:
My last hopes are on: Made in the Abyss, Centaur no Nayami & Seitokai Yakuindomo movie

It's all my personal say in the matter, so honestly, watch whatever you like/enjoy. However, my feelings for this Summer of anime series? Just... no...
Click to expand...

Sempai
Just watched an ONA.. Soutai Sekai, ep1, haven't found ep2 yet.... CGI is adequate, but not the best, story isn't new, but setup well in ep1... so??? must be looking for a production team to pick it up ,right?

The story centers on Shin Hazama, and a version of himself who led a different life in another Japan appears. A crack opens in the everyday life that he thought was impossible to change. Boys and girls have to decide what to think and choose when the world changes completely. The battle with another world and another self begins.
Click to expand...

finale released in May 5, what else you watch this season? i'm unsure at a few

Sempai
Wasn't "The King's Avatar" a summer anime? Didn't show up on the search... just finished the 12ep series based on the LN/manga etc... which has quite a few I heard, so it'll be around for a while.
It's rather good as others said... and I'm not a gamer, so I really don't care about that so much as the storytelling itself, and the story is rather solid... SoL essentially, and I guess it's realistic due to his age, he gets 'let go' etc.
Though, I would've thought that technology would have taken the use of keyboards away by now... VR use etc... guess that hasn't happened yet?
Setup in S1 for S2 is rather well done I thought, but I don't know this industry, which isn't explained too much, perhaps most viewers of this already know about the ins and outs of the gamer world.
Still well done, only complaint that I agree with is the subs aren't left up on screen enough... a dub would work easily with this series and fix that problem.
You must log in or register to reply here.
Share:
Facebook Twitter Reddit Pinterest Tumblr WhatsApp Email Link
Top