Things kick off from the end of the last episode with Domas pushing Bojji off the cliff edge in what seems like a certain death!
. 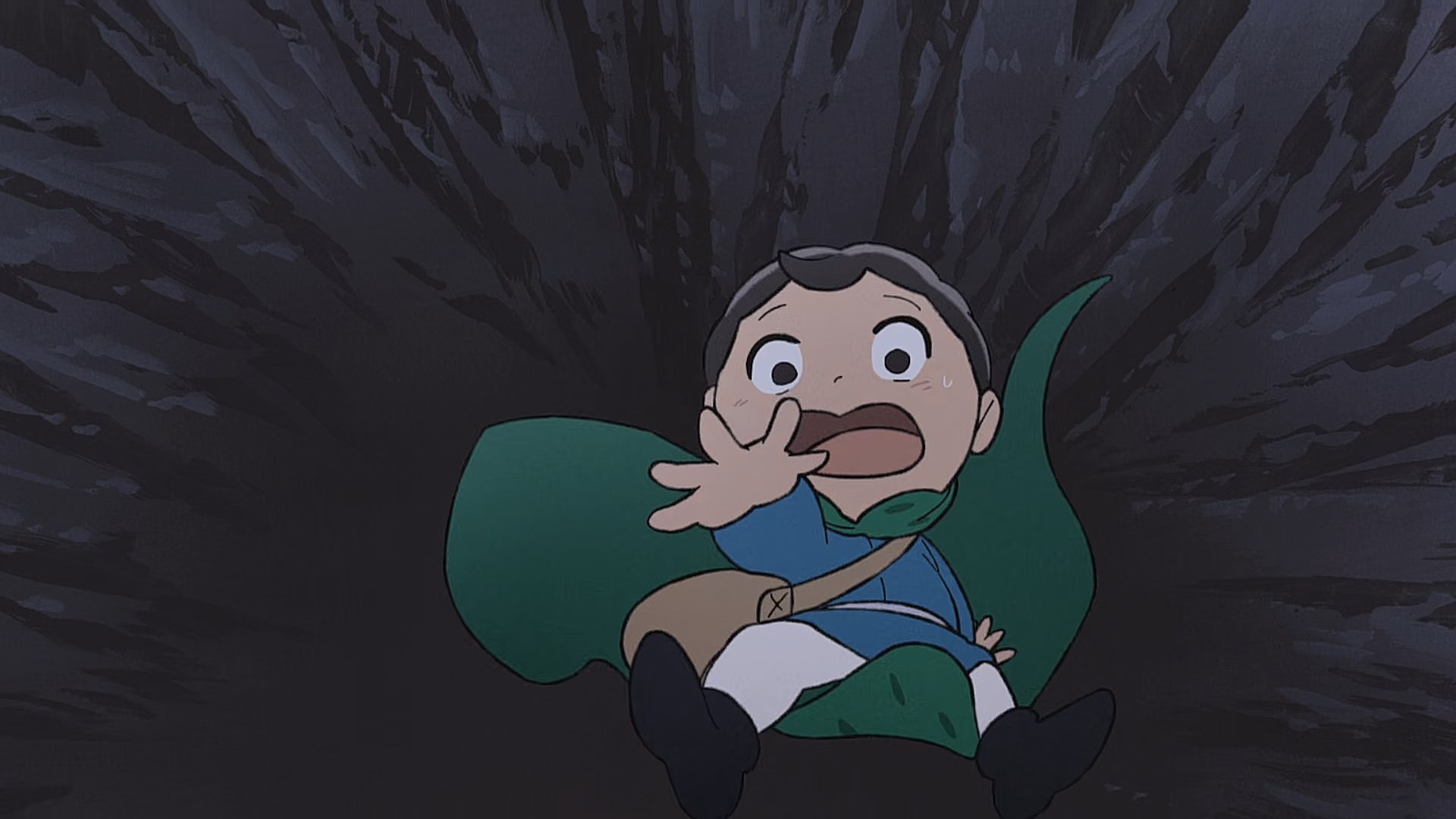 Instead something remarkable happens. What appears to be a spike comes off Bojji's backpack that stops his fall. Bojji was saved by Kage who was hiding in his bag all along! It would seem like Kage has been following him for quite sometime as he points out this wasn’t the first time he saved him as there was the time he was cushioned from his fall when he dropped out of the castle tower not to mention the incident of the poisoned food. He only kept himself hidden so as to flush out Bojji’s true enemies. Pretty sneaky if I must say. 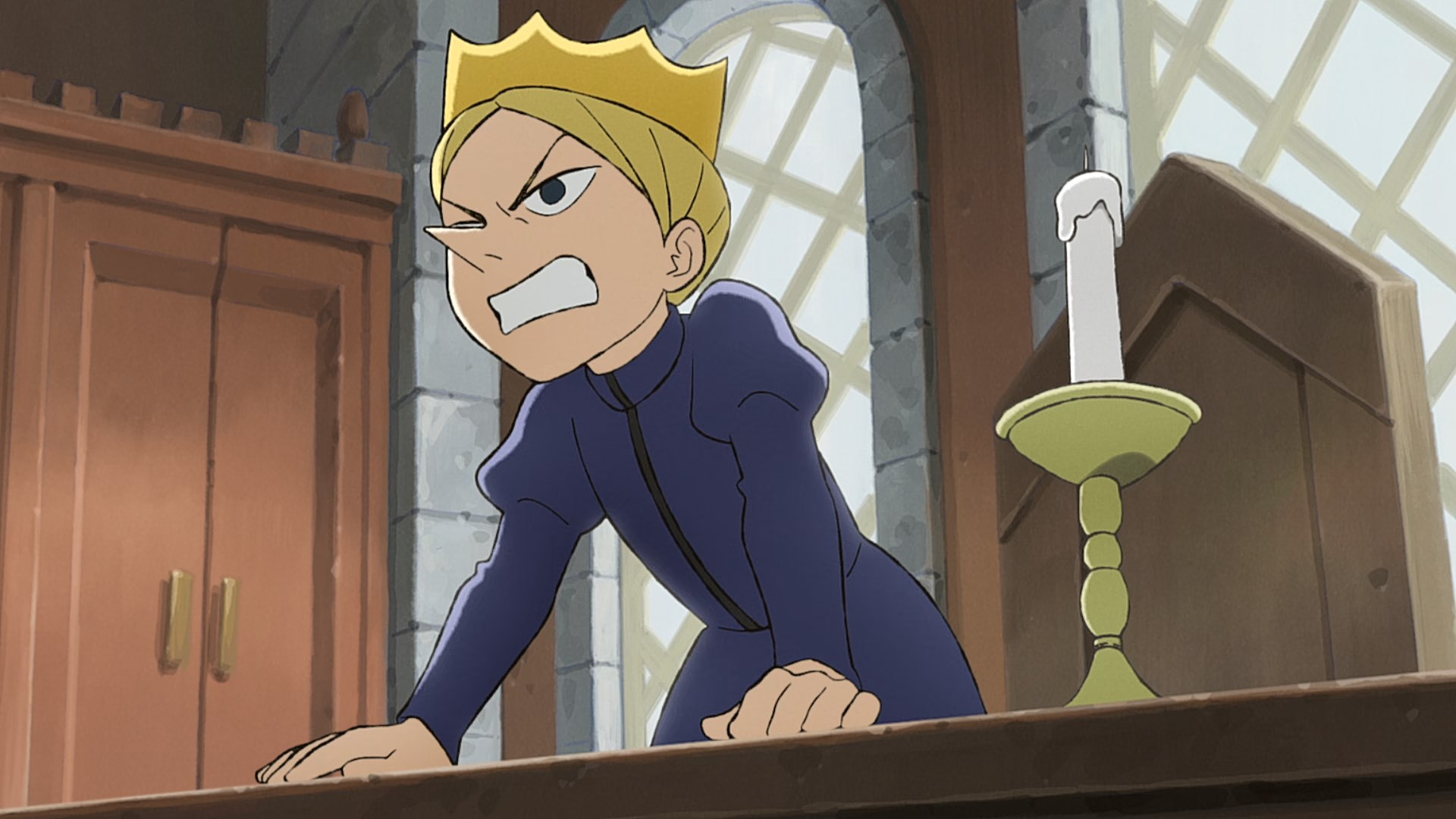 Things shift back to when King Daida discovers that Master Domas had actually voted for him and not Bojji. Instead of showing pleasure he is disappointed in Domas's behaviour and sees him as an untrustworthy person who is capable of betraying his master. It is a surprise twist and is actually understandable given the circumstances but it is something you see too often in shows. Kudos to spotting that act and not letting his ego turn him blind to a simple truth.

Things go back once more to Bojji and Kage who dust themselves off from the major fall. After a few tears are shed Kage hands Bojji a paper crown which Bojji accepts and wears. It is not long however when this crown is blown away and lands on a skull. That is an ominous sign if ever I saw one. But does this omen pertain to Bojji or King Daida? I can’t help but feel it is the latter and it will be Daida who is in a world of hurt very soon. As dramatic as that moment maybe we are not made to dwell on it as a pile of poisonness smoke engulf the two as the pair quickly loses consciousness.

After that dramatic moment things come back to King Daida as he walks down some stairs taking instructions from the mirror. At the bottom he meets a couple of people who are apparently his allies at least according to the mirror. Opening some giant doors Daida sees his father who has been preserved in ice since death. Why and for what purpose? The mirror states that Daida must get strong before it all starts? What starts? Big open question that. We are then treated to a quick flashback when King Bosse sees Apeas fight. What significance does this have? Who knows… 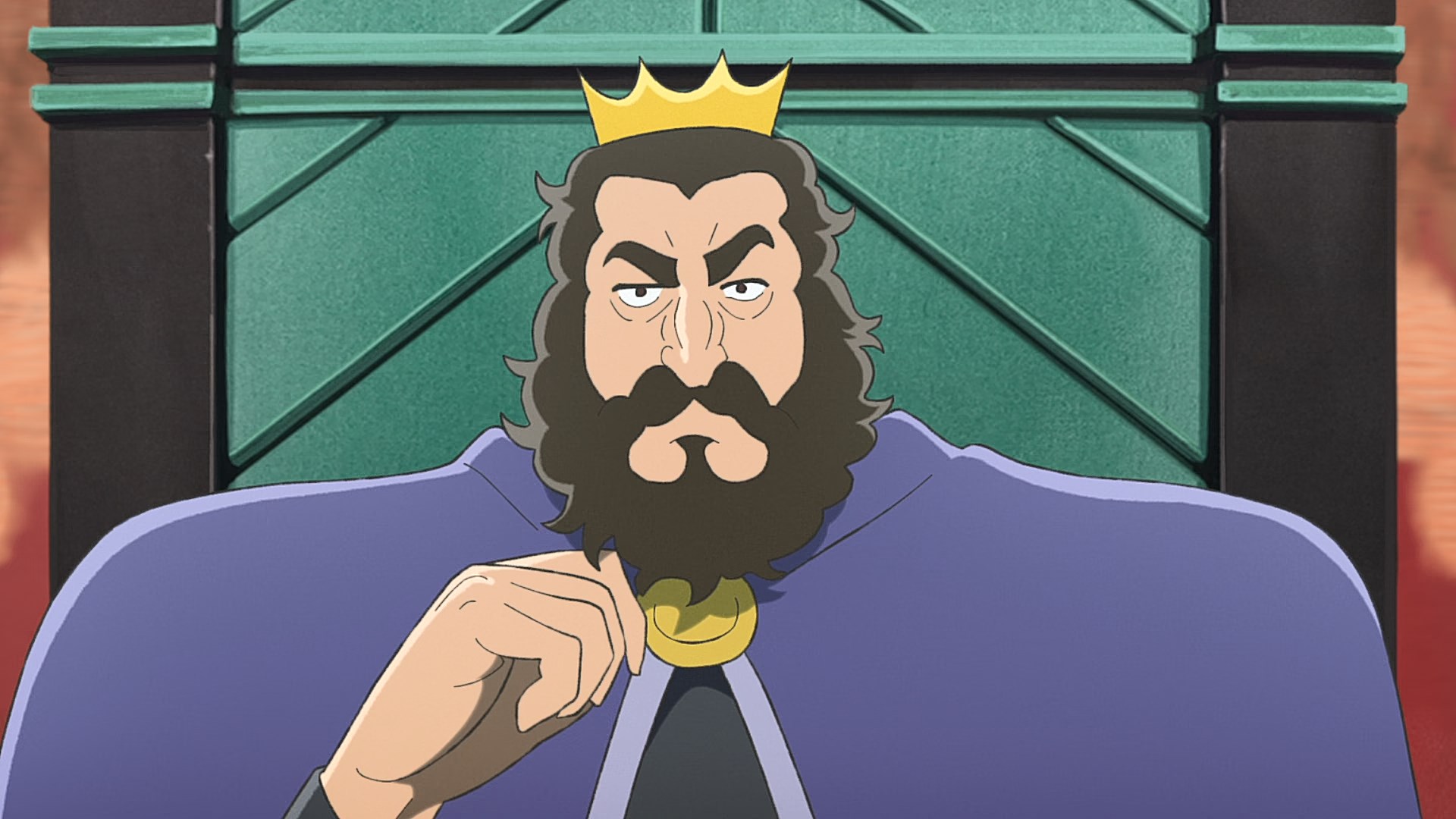 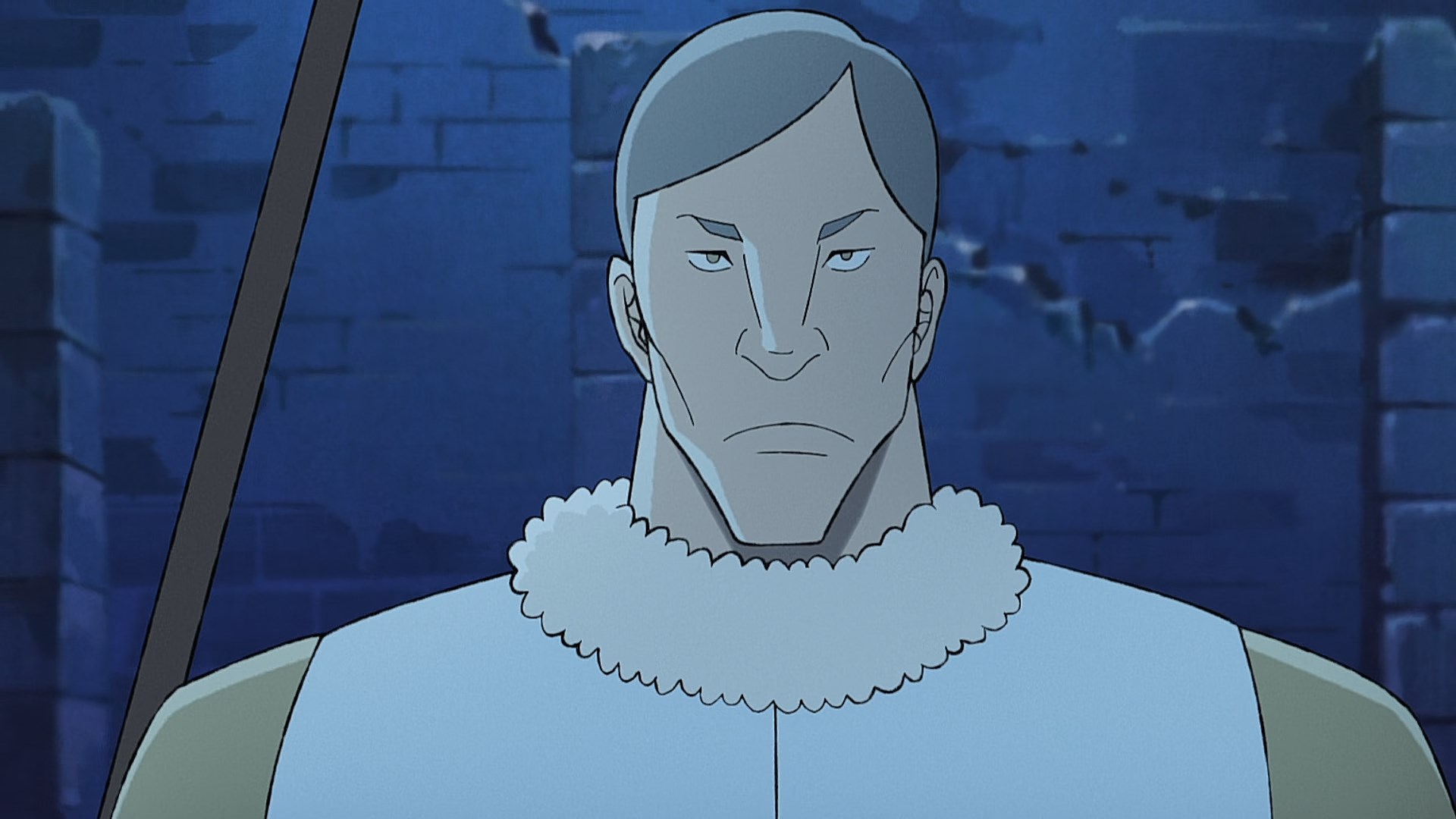 The mysteries don’t stop there as we also bear witness to a series of strange events. First an iron ball is hoisted, heated and then dropped and reacts with a liquid to create an egg. The egg hatches and a phoenix quickly grows and matures. It is quickly slain with its corpse burned to form a jewel of resurrection. This jewel is retrieved from the ashes and mixed with the blood of the phoenix to complete an elixir. 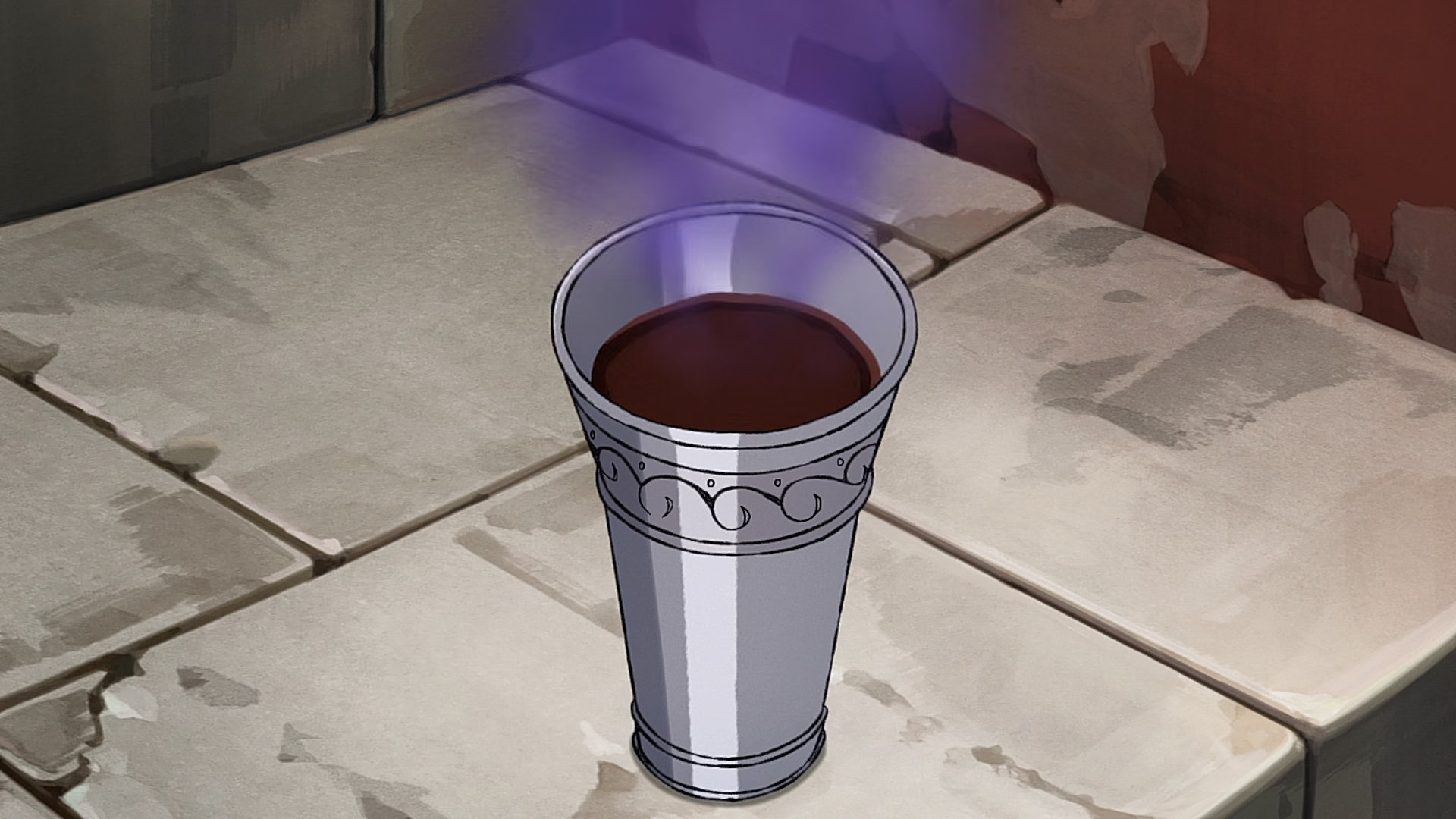 The mirror suggests that drinking the elixir will allow Daida to gain King Bosse’s power. He hesitates and refuses to do so but the mirror implores him to do it to overcome his poor ranking and “other” dangers. After a few agonising moments Daida contemplates drinking the concoction but finally decides not to do it. He is then ambushed and forced to drink but manages to overpower his adversaries and once free, throws the goblet to the floor much to the dismay of the mirror. What impact this has I don’t know but I feel bad things coming to this lad.

In the penultimate scene things pan out to Bojji and Kage who are taken prisoner in what seems like a king from another land. We get another revelation that the pair are already cursed hence the reason they survived the cursed gas. What giant power was denied to Bojji?

Things finally end in another dramatic scene when Hokuro discovers the truth of Domas betrayal. He squares and attacks Domas in a blind rage but is quickly dispatched… His attack is not totally in vain though as Domas loses his hand in this quick exchange.

Lots to ruminate on this episode with the various ominous predictions of future events. For more than one episode now there are bad signs pointing to King Daida’s early demise but will that actually happen or is this all a ruse? Other questions lie in what potential dangers lie in wait that the mirror alluded to but never described in detail plus what will be the fate of Bojji, Kage and Master Domas? Finally with the introduction of this new character, what impact will he have in the overall plot. Lots to ruminate and ponder but all in all some good stuff here.

Back in the underground cavern we see Bojji and Kage in the throne room looking up at the mysterious king sitting upon the throne. This king then begins to question the background of Bojji and why he has come here. Seeing Bojji’s slight figure and difficulty speaking he mocks him for being weak believing him unfit to become a king. 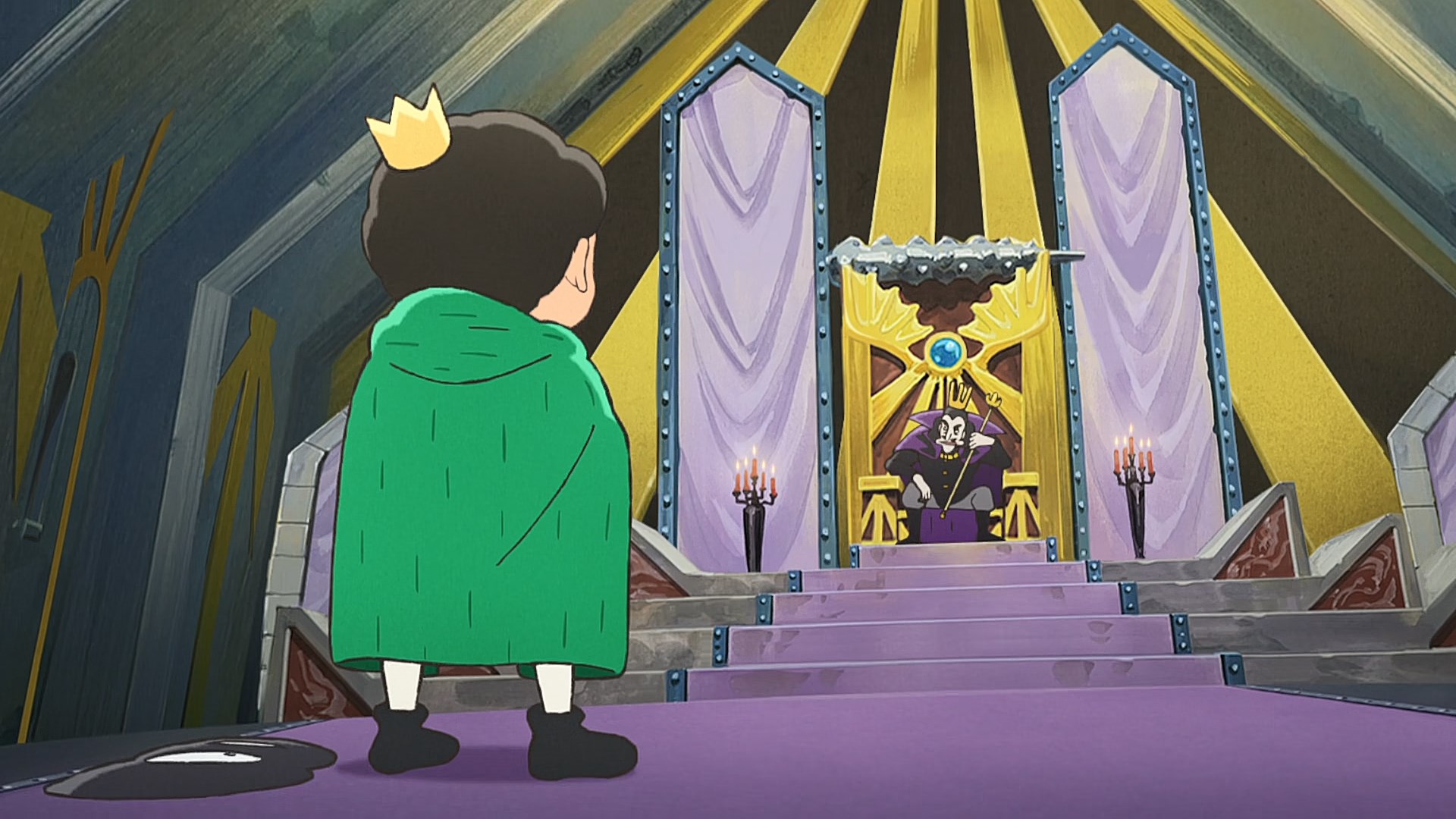 Kage interjects and pleads that Bojji can lead provided he can become stronger. All he needs is to meet a person named "Des" he says but just as he tries to utter the person’s full name Kage memory fails him and he is left grasping as to who this fellow is. Frustrated he simply shouts that he must seek this person immediately to gain strength.

It is at this point that the king finally gives himself a proper introduction announcing he is the man Kage seeks and his name is King Desha of the underworld! Still unconvinced by what he sees, King Desha states he can only make Bojji stronger if he has some strength. In order to test his might he suggests Bojji fight the captain of the order of the underground.

With baton to hand Bojji accepts the challenge with no hesitation despite the huge difference is size striking the captain numerous times. His attacks however are so weak it turns the fight into a farce and Desha can only look in disgust. Kage pleads that the he looks beyond his feeble attacks as his strength lies in his ability to dodge attacks. It is here when the captain decides to take the offensive and Bojji displays remarkable dexterity to avoid all his attacks. 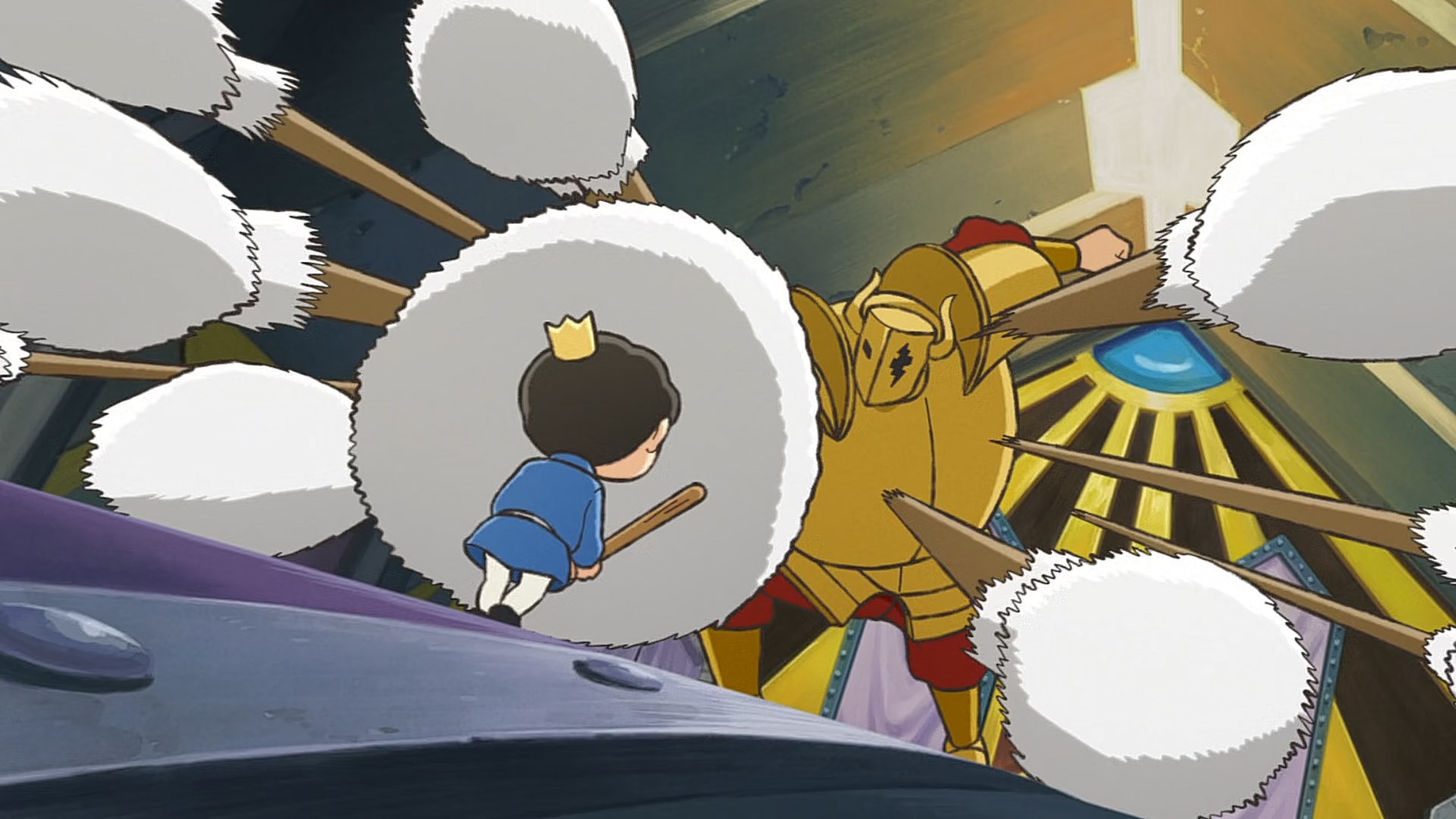 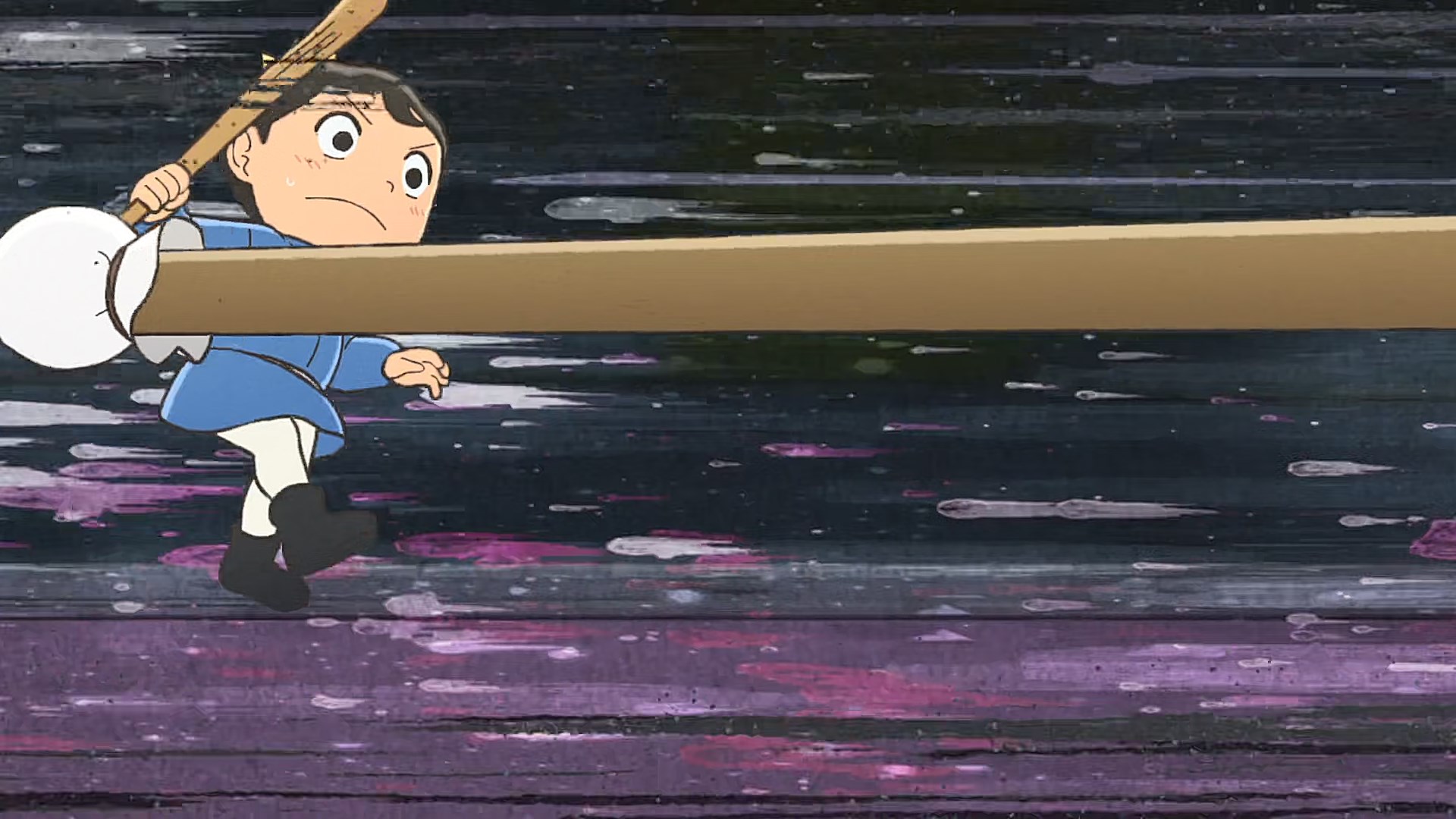 Despite this feat of avoidance Desha remains apathetic. The king remains silent pondering and thinking what to do next. He then decides that he will not train Bojji for he lacks any fundamental ability and talent. Distraught Kage pulls out a letter of recommendation in desperation. King Desha looks at this scroll for a moment and then rips it apart in disgust. The two are chucked out and left to lick their shattered dreams outside. 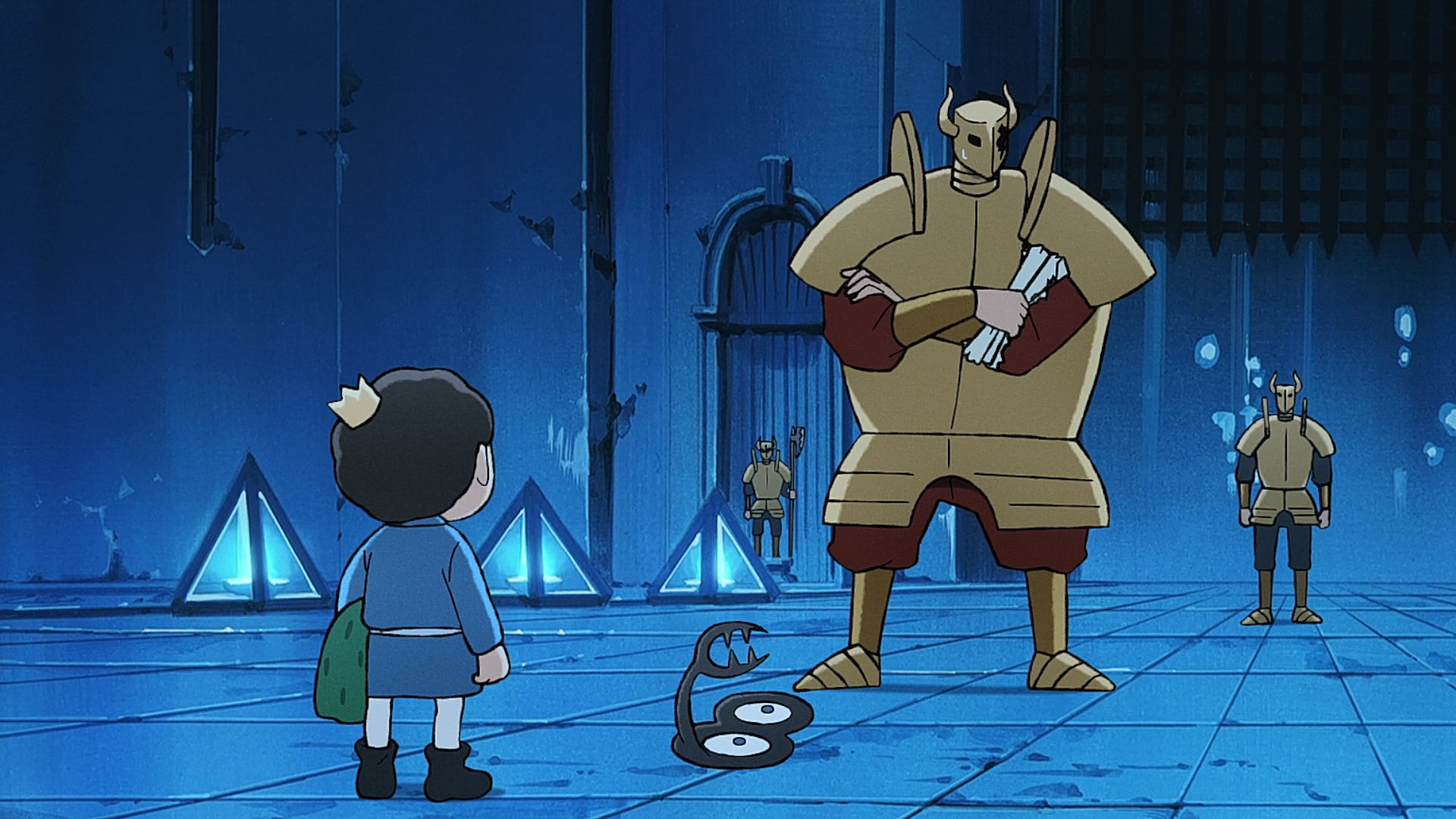 When everything looks like coming to naught and Bojji crying at his lack of strength the captain of the underworld comes out once more with the scroll and hands it back. He explains that the letter was actually addressed to Prince Despa and the King was simply playing with him when he pretended, he may help. Frustrated at being played Kage bites back at the captain saying why he tells him all this. The captain responds by saying he wishes to see Bojji grow as he sees potential in the lad. The two positively glow at this encouragement and take the scroll to continue their journey in search of Prince Despa who may offer them ways of becoming stronger.

We return to King Daida who stands before the Magic mirror explaining that while he does not reject her plans in theory he believes that he can make it on potential alone and does not need the aid of an elixir to secure his title as king. The mirror however remains unconvinced and scorns this resolve saying he is but a butterfly trapped in her web. What schemes has the magic mirror got?

Before we can mull over that Apeas storms in and lunges almost taking Daida’s head clean off. He is only stopped when the mirror pleads him to stop at the last moment. Surprised, he turns recognising the voice to be that of Lady Miranjo. We are then treated to flashback scene when Apeas is walking in tandem with King Bosse when he sees Miranjo in her previous form. She says she will change the man and it seems like Apeas perishes (although notably nothing is seen). Back to the present he kneels and swears loyalty to her. There is some key dialogue that is not heard but just as that is happening Daida makes an attempt on Apea’s life only for the mirror to stop him. Not long after Apeas incapacitates Daida.

Daida is then tied up and the truth of the matter is finally revealed. The concoction made is not what it seems and the trap the mirror spoke about is truly in action now. Despite that revelation things are still left open what her plans entails not to mention what it is Daida just consumed…

Tracking back to Bojji we see the two have gone sightseeing in this strange city taking in all the sights and sounds. It is not long before they stumble upon the home of Prince Despa… 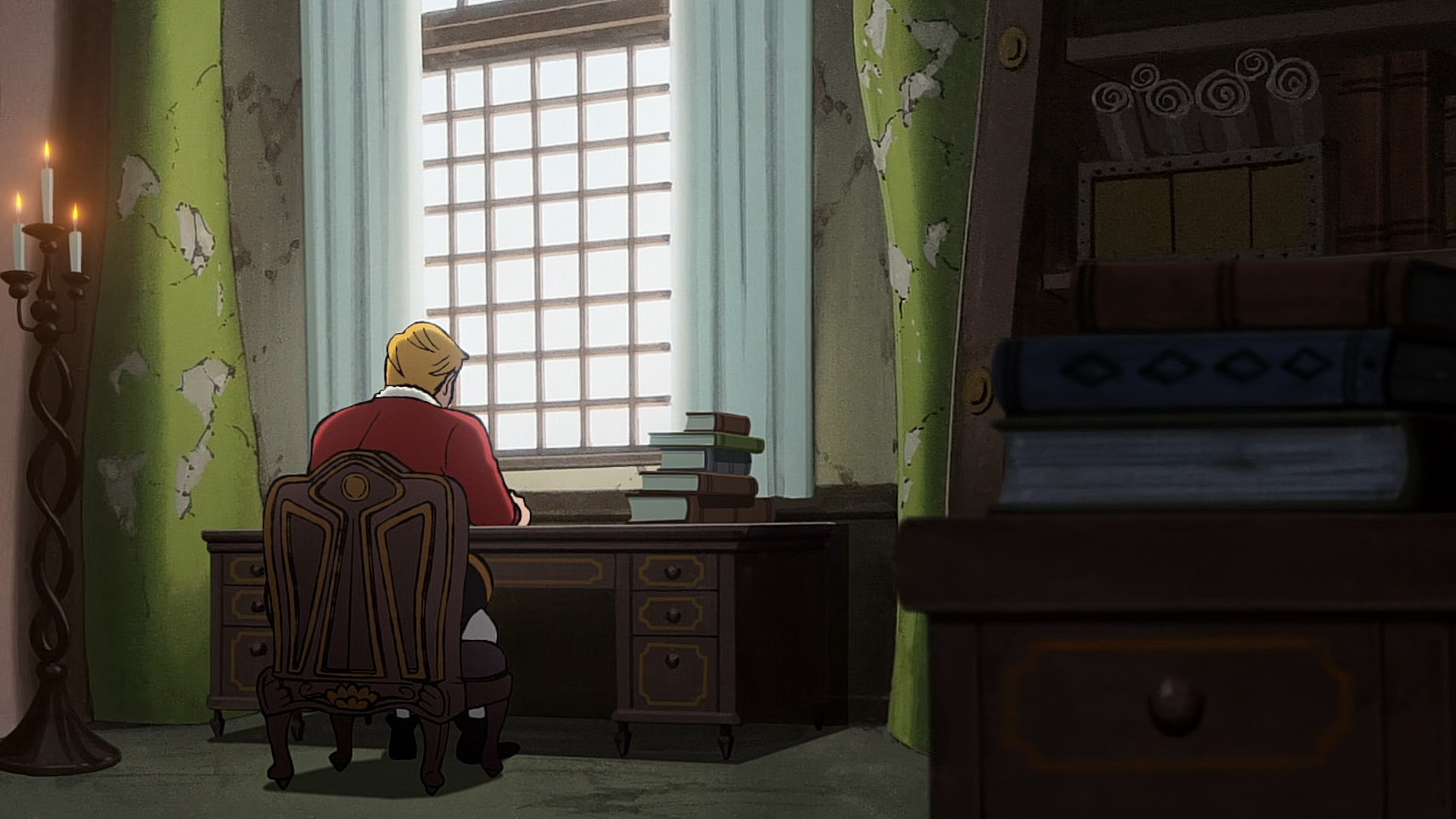 Again, a good episode although the level of mystery here is not quite on the same level as the episode before. The reveal of mirror's true nature is finally made but this wasn't entirely unexpected. It has been a few episodes since I had an ominous feeling over the fate of Daida and the seemingly evil aura coming from the mirror. All that seems to be coming to fruition now. What this entails though is an open question and we can only wait and see what happens there. On the Bojji front, things are little more unpredictable as it has been one twist after the other. What did King Desha mean by Bojji being cursed? How will things pan out after meeting Despa? Lots to look forward in episode 7 and with the level of intrigue we have seen so far not to mention the complexity of characters you got to pay attention when watching this anime.
Last edited: Nov 21, 2021
Click to expand...