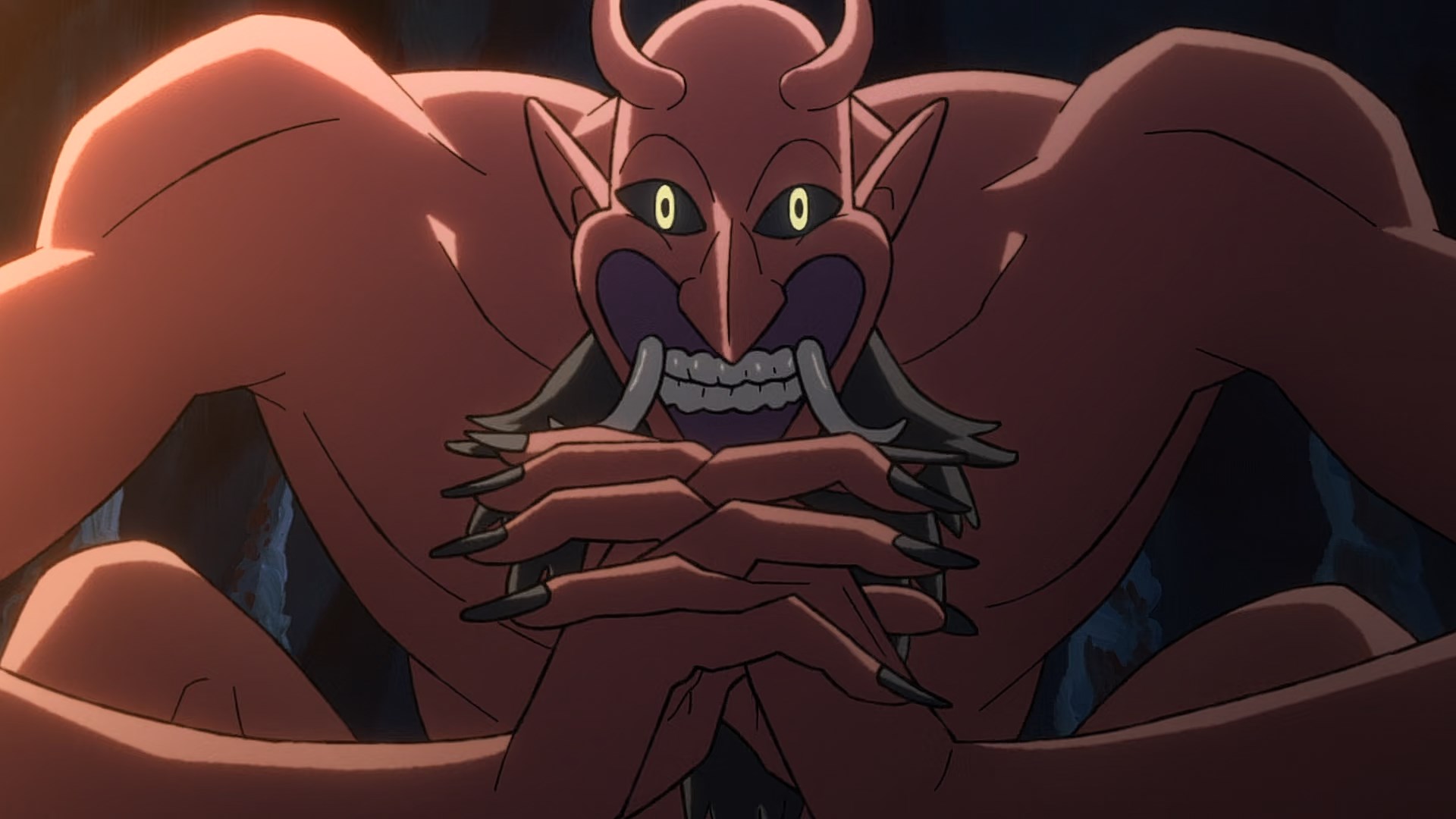 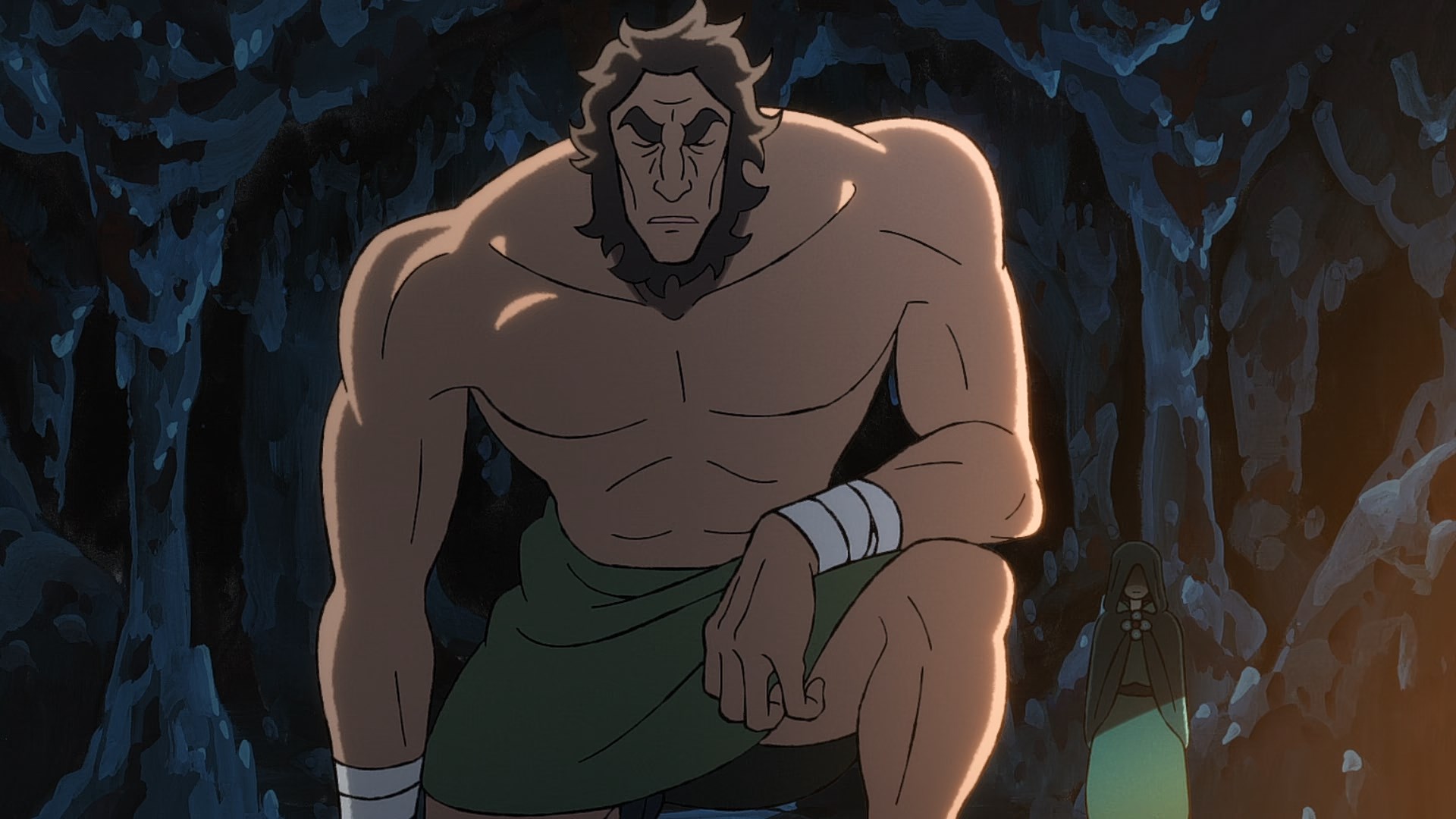 Things start off with a flashback scene featuring King Bosse who wishes to gain power through a pact from a demon. The demon says he can grant Bosse’s wish but in order to do so he must extract the power from another blood relative in exchange. Bosse hesitates initially citing he has no relatives but the demon says it is still possible for his wish to be fulfilled provided he gets a child.

With his vision to glory made clear his immediate quest is to find a suitable wife to bear his children! Upon finding a woman he goes for the direct approach and says straight up: You are the strongest woman around; I want you to have my children! I am surprised the girl doesn’t just throw the F-bomb for coming out of nowhere and saying that. Instead of a point-blank refusal she gives the guy a chance by saying he can get his way if he manages to beat her in a duel. Seeing as the duel can only have one winner (she gains nothing by winning) it seems more like a Scotsman’s bet! 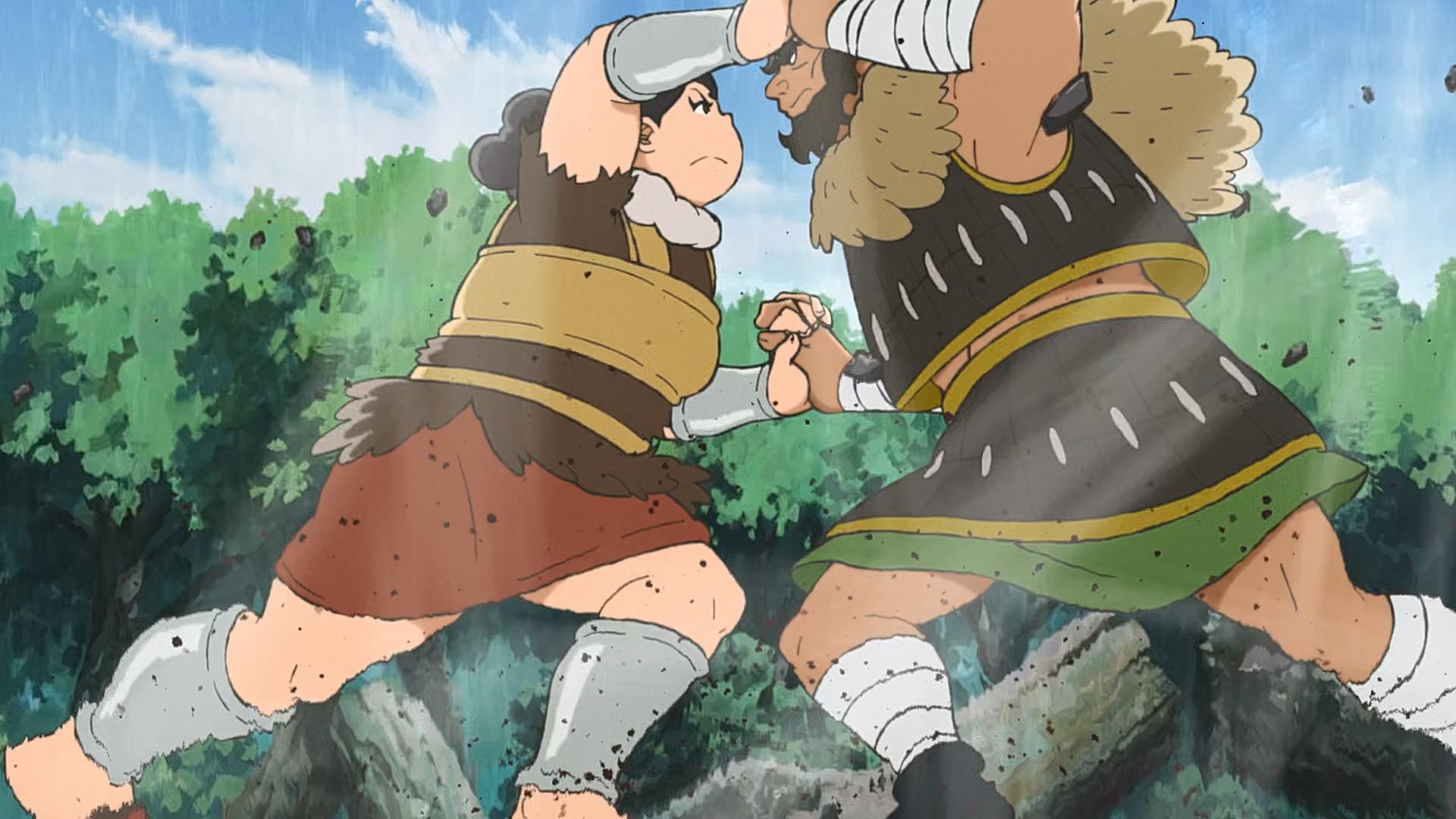 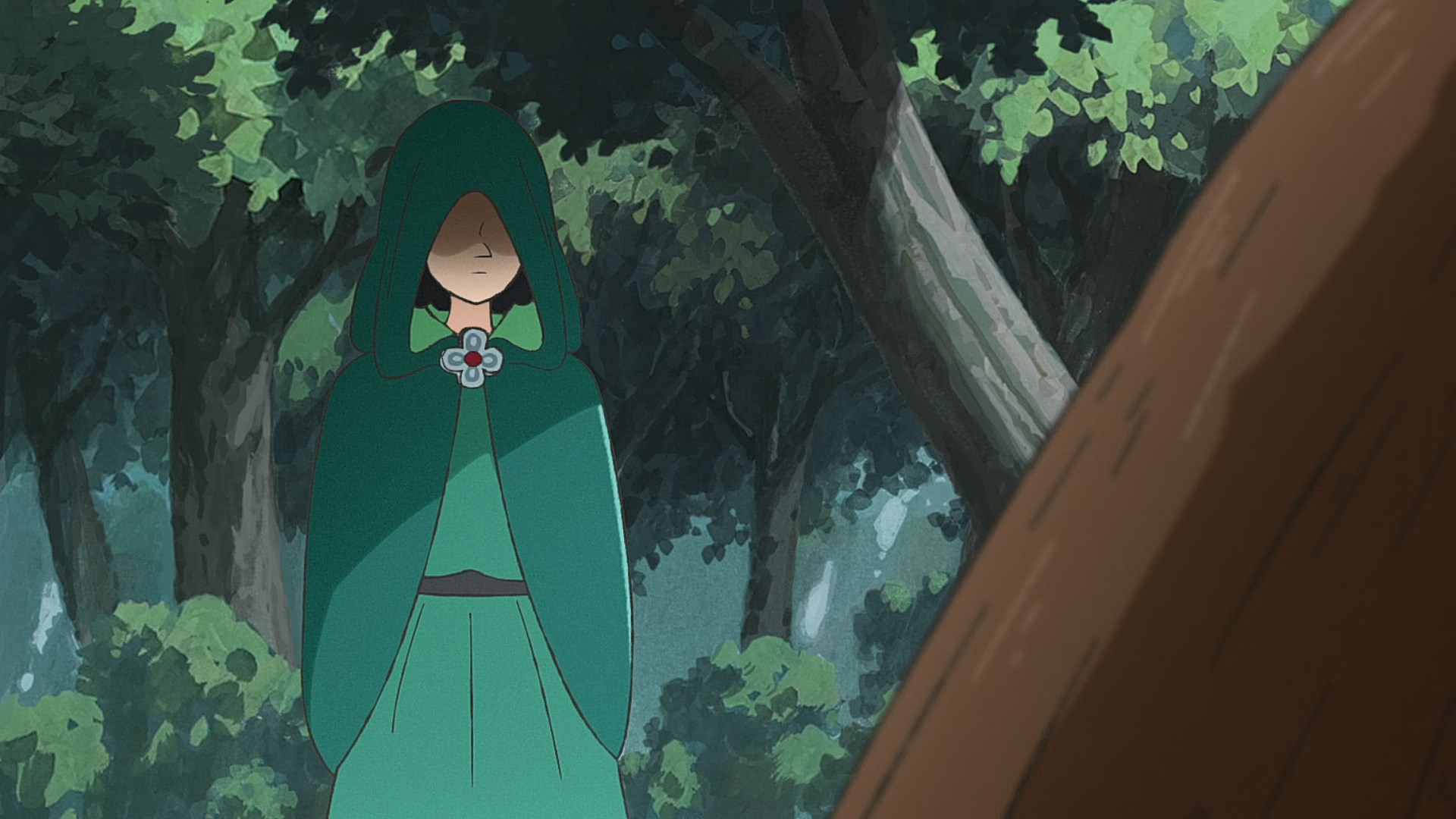 Seeing as this boils down to a physical fight between a man and a woman it is pretty clear who wins the duel here. He wins and he gets his way. The only thing of note is the person who happens to witness this encounter. What implications will that have on the story? Months later a baby is born and its effect is immediate on Bosse whose muscles and strength just suddenly grow. He then pays the woman a visit and we see this baby is comically small compared to the mother! 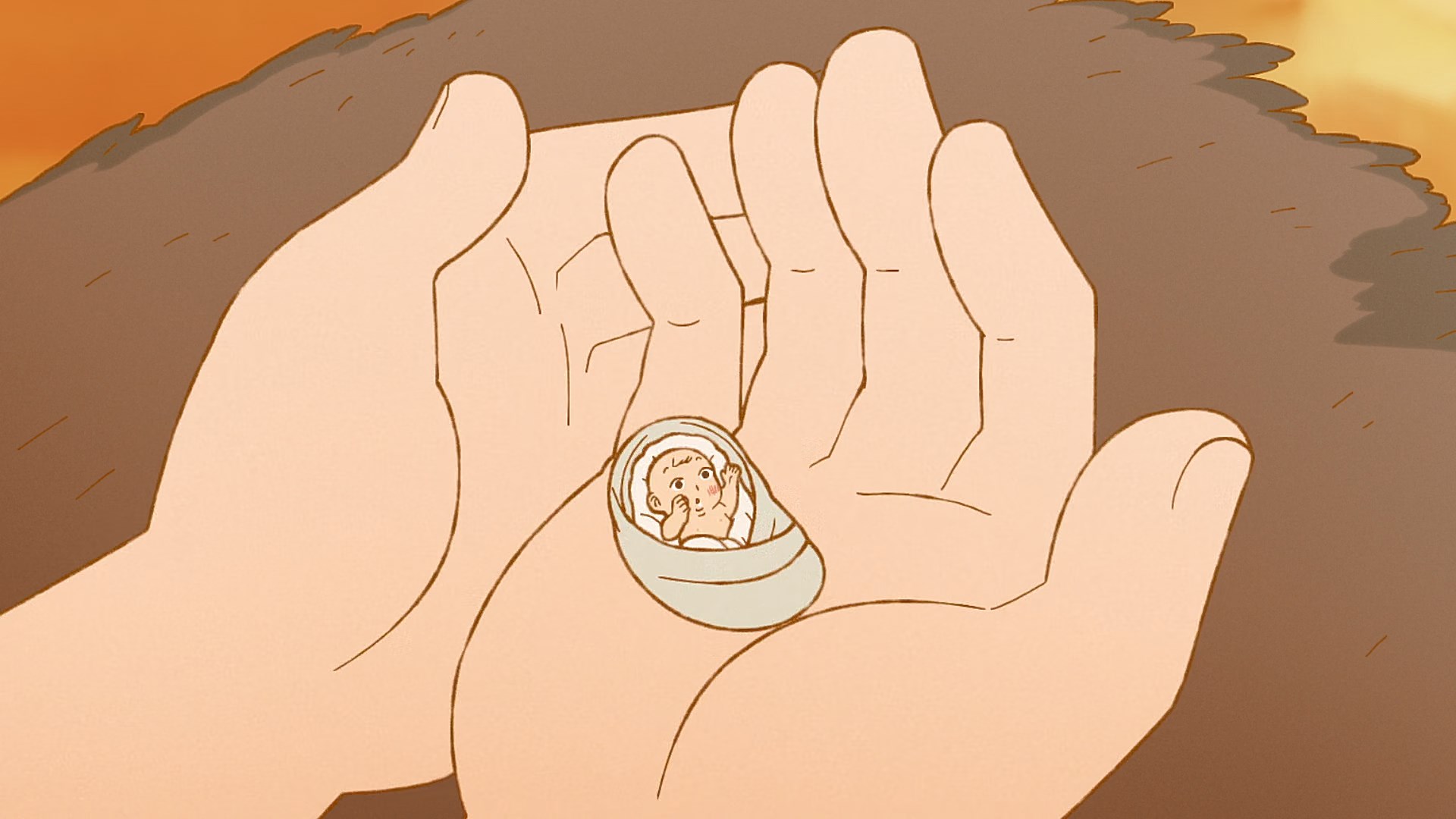 I suppose this small size is the work of the curse and would explain how Bojji lacks any physical strength. With the truth of the pact laid bare for Bosse he cannot look at his son for long and runs away in anger and disgust. In the moment of frustration, he smashes a boulder and vows to create a new country and give his son the title of king!

Going back to the present, we see King Daida perched on his throne when the mirror, much to his amusement, reveals who the strongest person in the land is. The mirror Miranjo then calls for the death of Queen Hiling which he agrees to carry out. A pack of monsters is suggested to kill her and Daida asks Apeas to fight them to test their strength. In this quick exchange it is clear these monsters are not just brutes but are also cunning as well setting Apeas into a trap. Daida can’t help but challenge the beasts to a duel and not only does he come out unscathed, he manages to give one a good thumping! 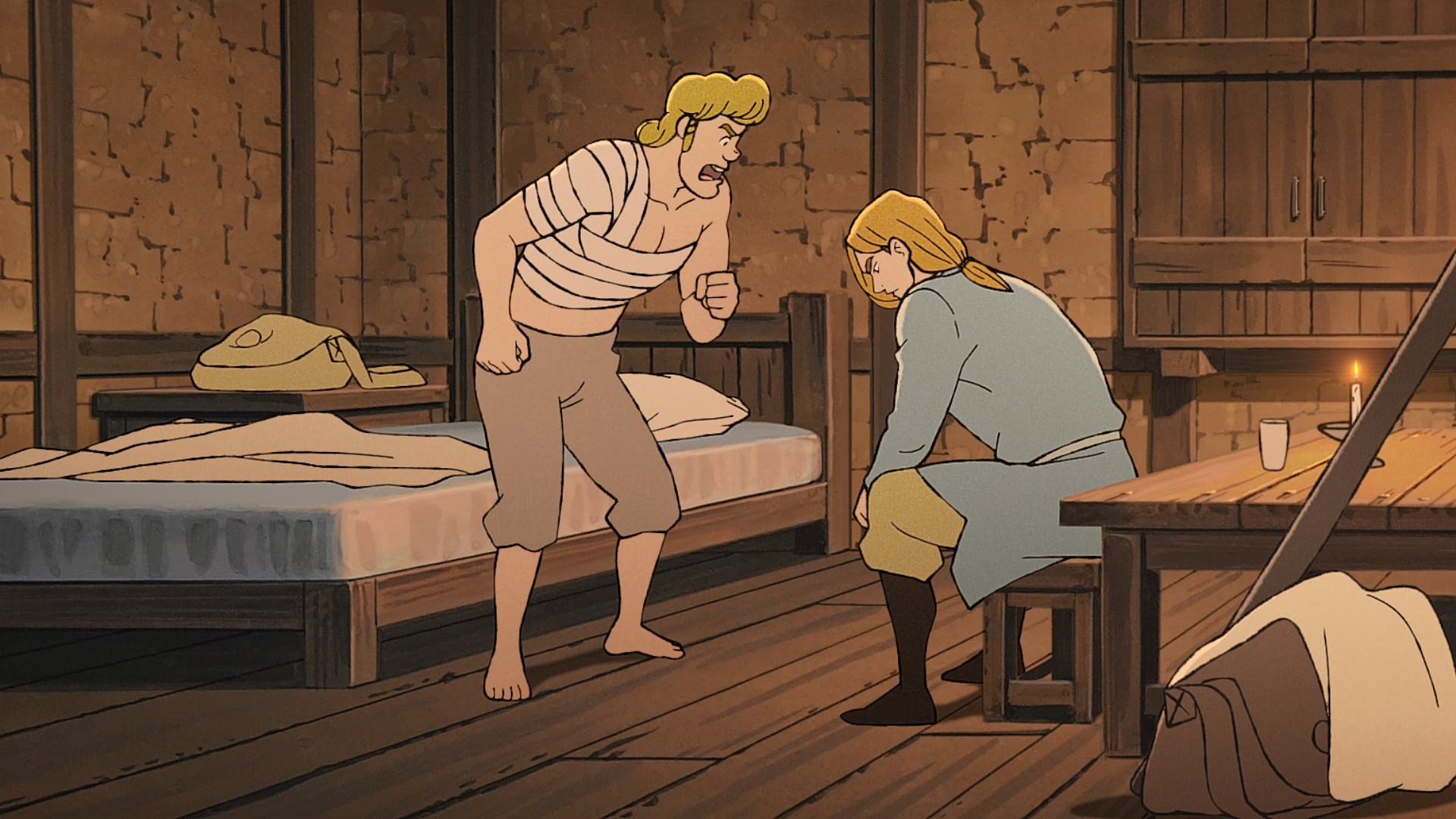 In another scene Hokuro seeks revenge on Domas but is stopped prematurely. Domas states that it is pointless to deliver a message when the order to assassinate Bojji came from King Daida himself. Moreover, even if he tells Queen Hiling he will face certain death. To avoid such a fate Domas decides to disappear but Hokuro is unfazed by this speech and will tell her anyway. His news about Bojji’s death is devastating for Hiling but as warned he put up on a stake and is summarily executed. Or so it would seem. Perhaps with a sense of guilt or admiration of Hokuro following through with his words Domas attempts a dramatic rescue and seems to succeed until Daida presents himself.

If it wasn’t clear before it certainly is now that Daida’s power has grown in leaps and bounds as not only does he have a new aura but he completely overpowers Domas. Daida removes Domas’s mask to reveal his identity. A shocking moment is eclipsed by an even bigger one when King Daida states that Bojji still lives! The execution is cancelled and Domas and Hokuro escape with their life’s although they are banished from the castle.

Domas says that Daida’s body is actually controlled by Bosse which would explain his new found strength. Hokuro can’t believe the stunning revelation just made but before he lets that one sink in Domas says he must restore his right hand and then train Hokuro to get stronger so they can challenge the fiends from the underworld as instructed by Daida just moments earlier. What is the reasoning for this attack?

Kage at a loss to explain how Bojji broke that massive rock is taken unawares by Despa’s and Bojji’s appearance. Despa declares triumphantly that Bojji has mastered the Despa arts and seems ready to take the world on! Will Bojji’s redemption arc start soon? In the final scene we get to see the real Daida, who is trapped and enclosed in another space. He realises he has been trapped by the mirror. Big question is will he escape? 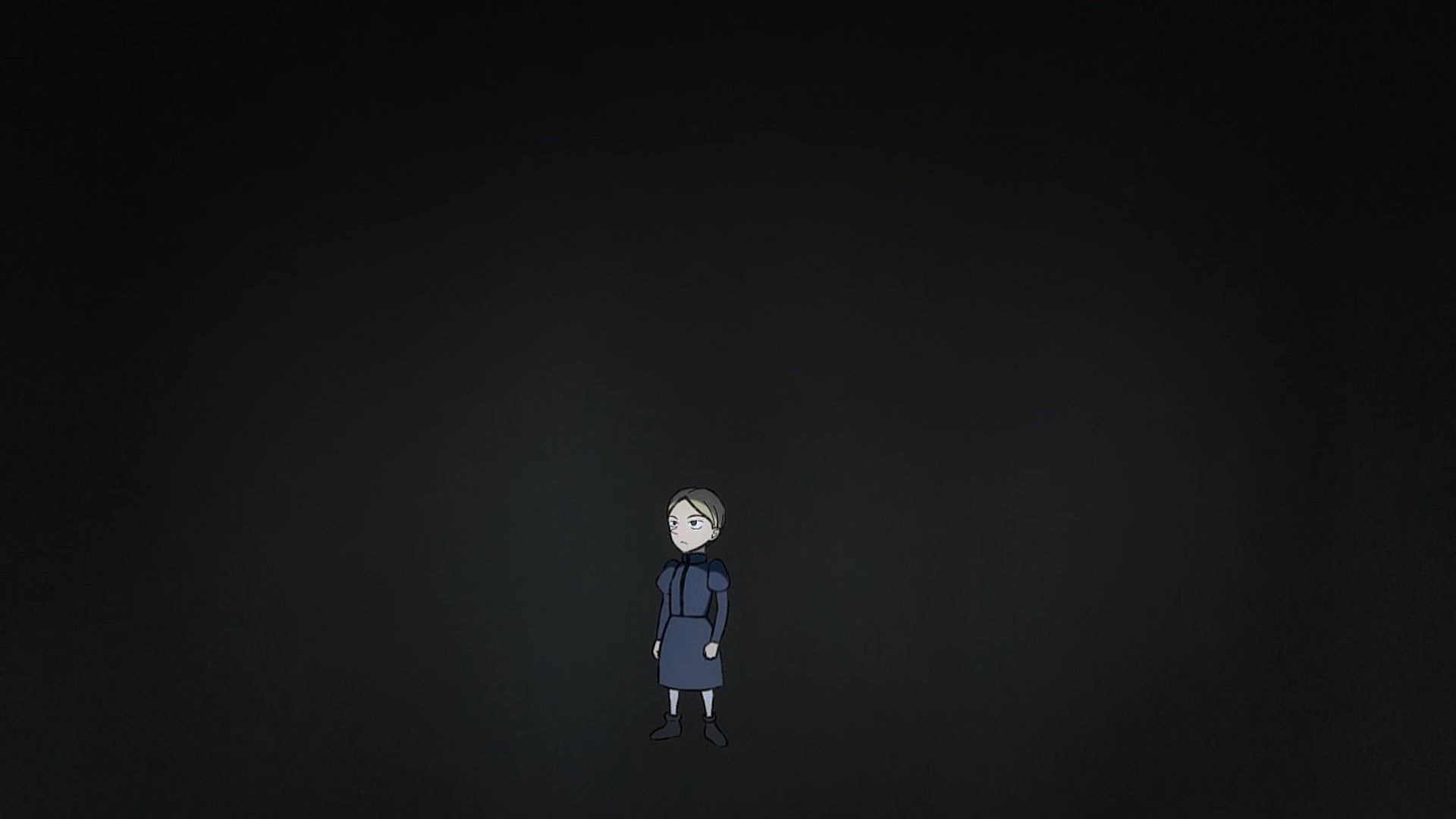 Thoughts: This episode was largely about Bosse and his ambitions. Not only did we get a flashback but we also get to see his spirit act through the body of Daida. As has been common throughout the series no character is without their flaws and it seems Bosse carried an ambition that left him doing questionable things most notably stealing the strength from his own son. His resolve to make his son Bojji the king seems to be strong though so the order to kill the monsters of the underworld would imply their death would protect Bojji from a major threat and perhaps future curse. It may even restore his true powers once more as the curse he made with that demon is broken.

On the less supernatural the attempt on Queen Hiling's life is a clear political play to destroy one of King Daida’s key supporters. What political footing will he be in after that happens? This was one of the better episodes and was definitely better than last week as it addressed a point I made then where the events of Daida seem more gripping and entertaining that of Bojji but that could change very quickly!
Click to expand...