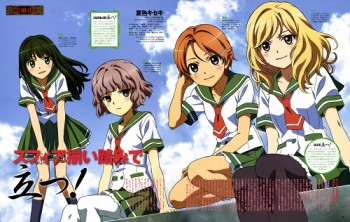 Plot Summary: Natsumi, Saki, Yuka, and Ringo are best friends. They've grown up in an old agricultural town, experiencing everything together, both happy and sad. But one summer, they are visited by a miracle.


Thoughts:
After the first episode watched, I don't have a clue of what this anime is about or what they might do. The girls promised to be idols while being kids and and in the end of this first episode, they encountered a awkward miracle out of nowhere. It is better to wait for 1 or 2 more episodes before judging this.

(Sorry if I have a bad English)
S

Retired
QUOTE (Nemingway @ Apr 05 2012, 01:41 PM) After the first episode watched, I don't have a clue of what this anime is about or what they might do. The girls promised to be idols while being kids and and in the end of this first episode, they encountered a awkward miracle out of nowhere. It is better to wait for 1 or 2 more episodes before judging this.
I have no clue where they're going with this anime as well just by watching the first episode

Is their wish to become idols? Do they want to become a kick ass national level tennis pair? They have the ability to fly WTF?! Yeah I face palmed after that sequence. But ya know just because I don't really have a feel for what's going on or what might happen doesn't mean I'll just completely write it off as of yet. If the show can provide me with some decent level of entertainment value over the next two episodes I won't have any complaints. It doesn't even really matter to me if it's something over the top as long as it's interesting. Though I'm not for sure if I'll be too terribly motivated to continue if it's just based on them becoming idols. I could go back and just watch The [email protected] if that's the case although that is highly unlikely to happen.
N

Sempai
I feel the same ! For the moment I just want to see more of this anime before actually deciding if I should drop this or continue. The fact that we don't know which path this anime will take is kinda frustrating but we can be surprised, though... I don't think so xD

Oh and between, when I saw Saki-chan, I believed she had the potential to bring some happiness on this anime but when you see how much she likes to ruin the mood, I just want to slap her very hard XD And the other girls are just plain stupid without personality imo...

(Sorry if I have a bad English)
K

Kouhai
Watched the first ep of this yesterday and it was quite a surprise. Just like Nemingway I thought Saki would be the most cheerful of them and never imagined for Yuka to be that, well, overenergetic? And mostly I didnt expect it be that much drama.

From what I saw of the first ep my guess is this one will be a sliece-of-life-show with a more serious touch than most of them.
And probably a lot of music and sport.
[Admin note: Sig removed due to negative comments toward the community]
G

Kouhai
I am always skeptical of slice of life anime, since so many of them put too much emphasize on overblown cutesy comedy, but I am fortunate to have given then one a try. It has just a right amount of comedy and slice of life mixed in with real life issues. Once I get my finances in order, I'll go find the DVD collection of this.

Kouhai
This was a good watch about friendship and the fear to move on in life. It had a few really emotional scenes, mostly about Saki moving away, but in it was a good amount of comedy mixed too.
The miracles gave of nice little subplots and twists to everything and never really felt out of place.

Characterwise the four girls were a nice combination of different personalitys, which thankfully werent exaggerated.

All in all an entertaining show which I really enjoyed watching.
8/10 from me.
[Admin note: Sig removed due to negative comments toward the community]

Retired
Natsuiro Kiseki is based off a new manga that began running this year. The anime adaptation premiered in Spring 2012 and did not receive a simulcast nor a US license. It follows the daily lives of four girls: Natsumi, Saki, Yuka, and Rinko, the four of whom often gather around a large rock at a Shinto shrine. The rock is rumored to be able to grant people's wishes when all those gathered around wish for the same thing...that is until the girls find out the myth is true. Furthermore, with Saki getting ready to transfer schools, the girls decide to spend the last summer together filled with magic.

The story starts off as a simple slice of life title similar to Tamayura following four girls. Nothing spectacular really happens until the ending where the show looked like it completely fell off a cliff with the bizarre magic of them flying. Yes, flying. Luckily the show does manage to bring itself back together (to some extent) and weave in the bit of magic it has. The character development is shallow for the most part but the characters themselves are generally quite amusing and fun. The conclusion is quite well done for an ongoing title. It closes up quite nicely and doesn't leave any regrets behind.

Art AND Animation are easily worst aspect of this show. Art is very low quality and lacking in significant detail while animation is terrible all around. From poor facial expressions to poorly coordinated body and object movements. The list doesn't stop there but when you take into account Sunrise's other show for the season, Accel World, as well as a number of their most recent titles, this show's quality just spells trash. Heck Phi Brain even looks significantly better than this.

Music is strong with this show. OP/ED are both performed by sphere, whom also voice the four lead heroines. The OP is very memorable and fitting for the show. ED, while not as memorable, is also a very good song. Background is fairly decent but sound effects are average despite strong inserts. Seiyuu cast, as said before is sphere and all do a great job in their roles by keeping the cast lively and entertaining.

Enjoyment? Had I kept up with this show properly, I definitely would have kept this high on my weekly watch list. It's a really fun show and I thoroughly enjoyed pretty much all episodes except the first. I would definitely recommend this over Tamayura. Other shows that fit this genre include ARIA or Hidamari Sketch, so if you enjoyed this, you should probably watch the two recommendations and vice-versa.

Overall, it's not a show to jump up and down for. It's light and fluffy with a nicely incorporated magic twist. Obviously the sudden "I can fly" moment is a huge drag on the show but if you were able to get over that hurdle it's a nice lighthearted show.