Yulia is taking a shower and when she peers over to the hole can see another little critter staring right back at her. Taking this perv in her stride she casually dries her hair but then clearly remembers the time when Miko grabbing her in a chokehold. Vowing never to be humiliated again she seeks revenge against Miko! 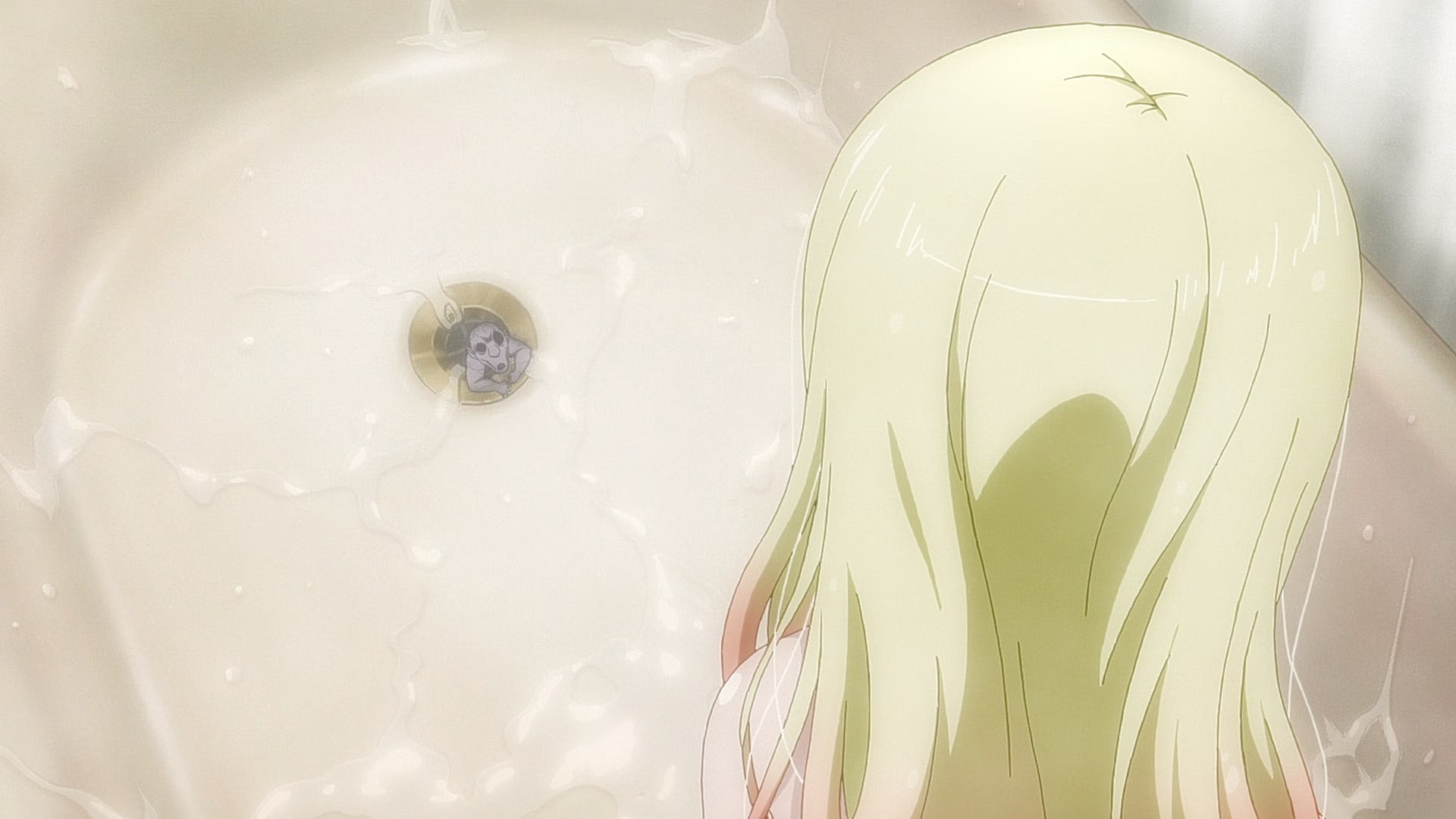 Meanwhile back at school Hana shows Miko the snap she took the other day at the shrine. It turns out a rather special number of people liked the picture! All influenced by yours truly! 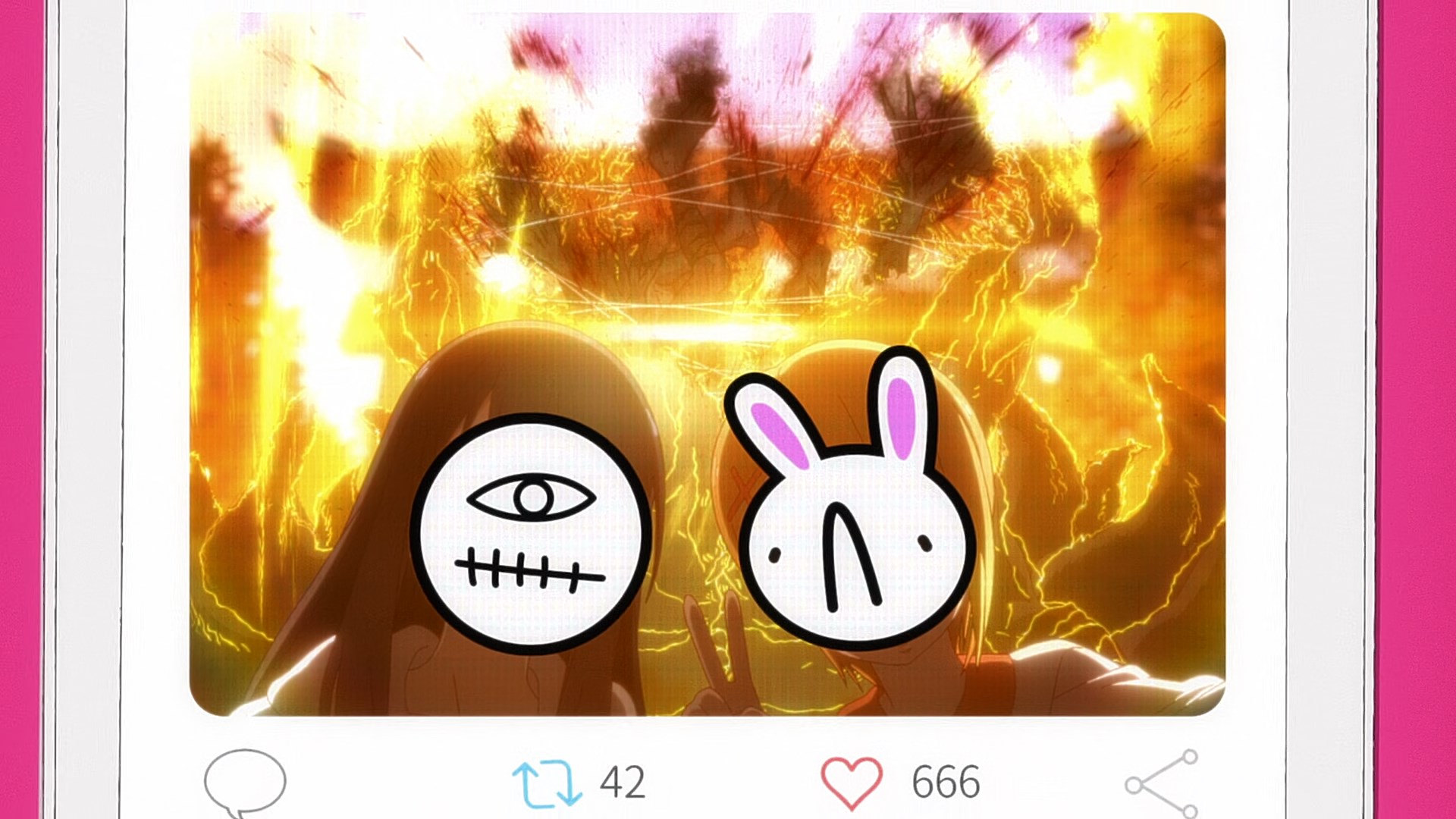 Buzzed with the number of likes, Hana believes she has an eye for photography. She brings out a polaroid camera suggesting she should take more phots in the future. Miko attempts to dissuade her from that notion to avoid future dangers but then Hana shoots another pic taking Miko by surprise. When looking at the results… Another ghost is seen in the picture!

Just at that moment Yulia pops out from nowhere and sees the recent picture of Miko. Looking at the results she suggests that are even more great snaps to be had and even eggs Hana own by saying how talented a photographer she is. The words go straight to her head and it would seem Hana isn’t just oblivious to ghosts…

Roped into another (mis)adventure Miko follows Yulia and Hana into an excursion into some forest area. Yulia leads the way and it is not long before they are met by a long dark tunnel. Even Hana is beginning to get second thoughts about this bird-brained idea but Yulia insists there is something great at the other end of the tunnel… 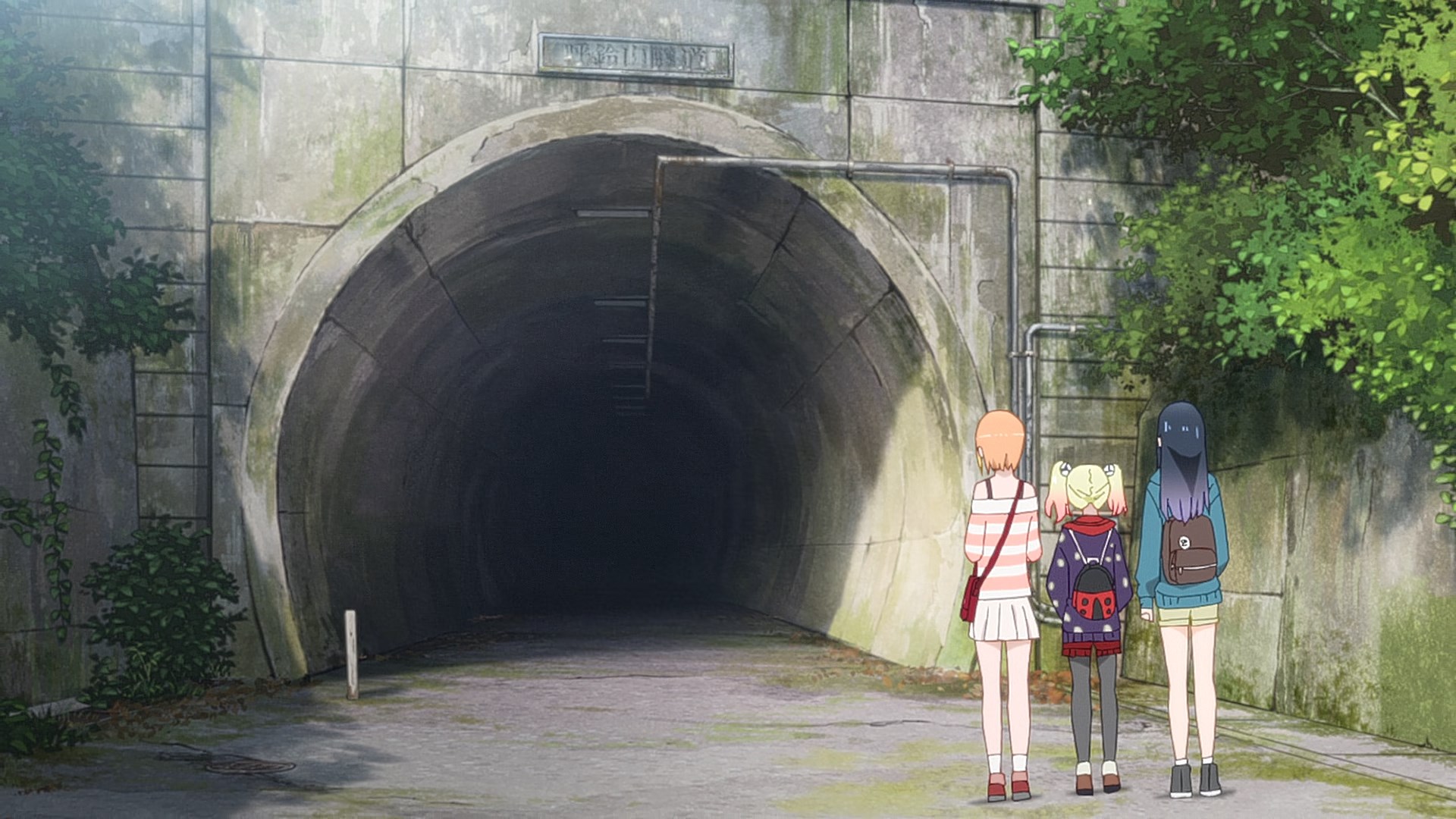 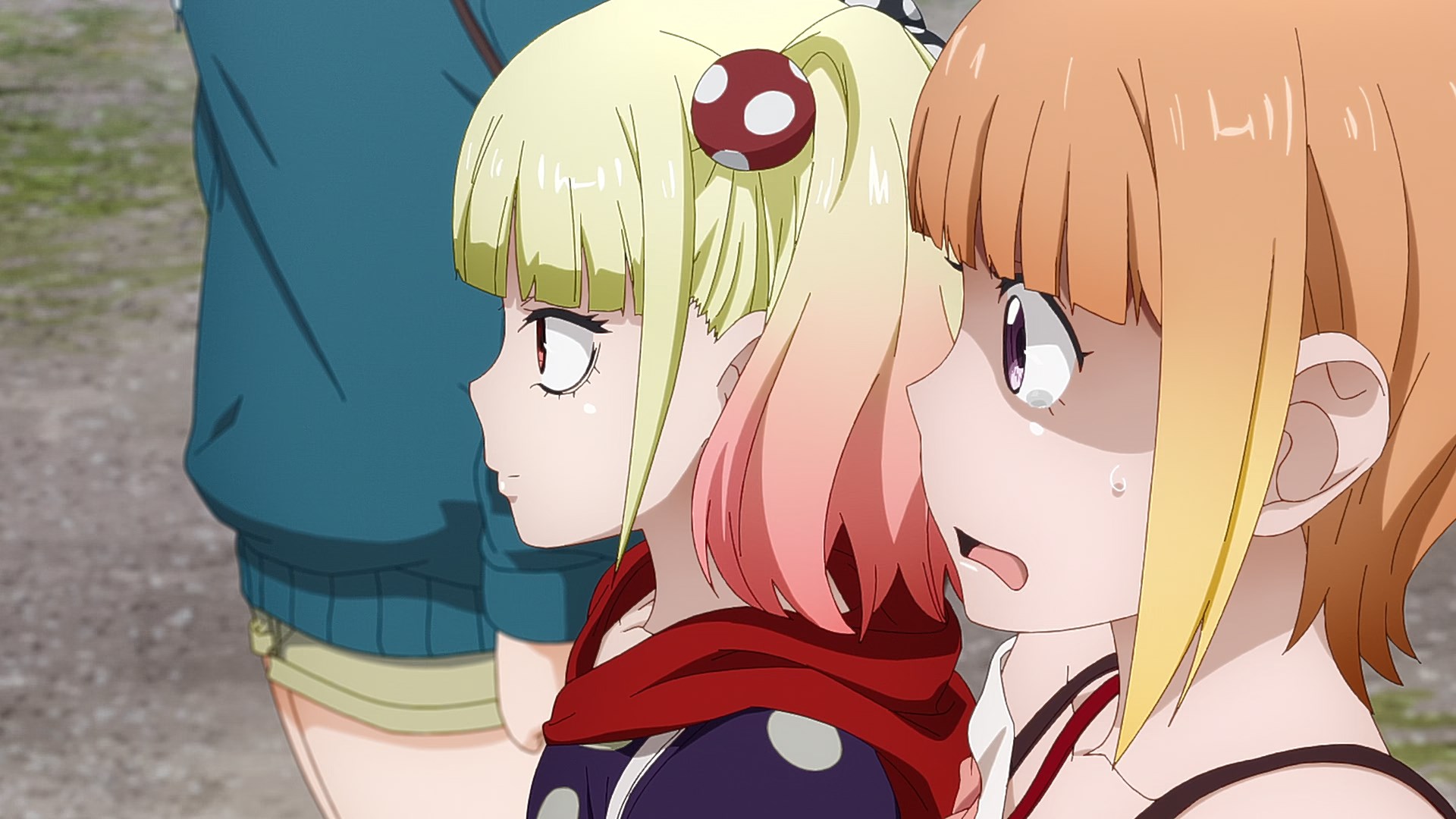 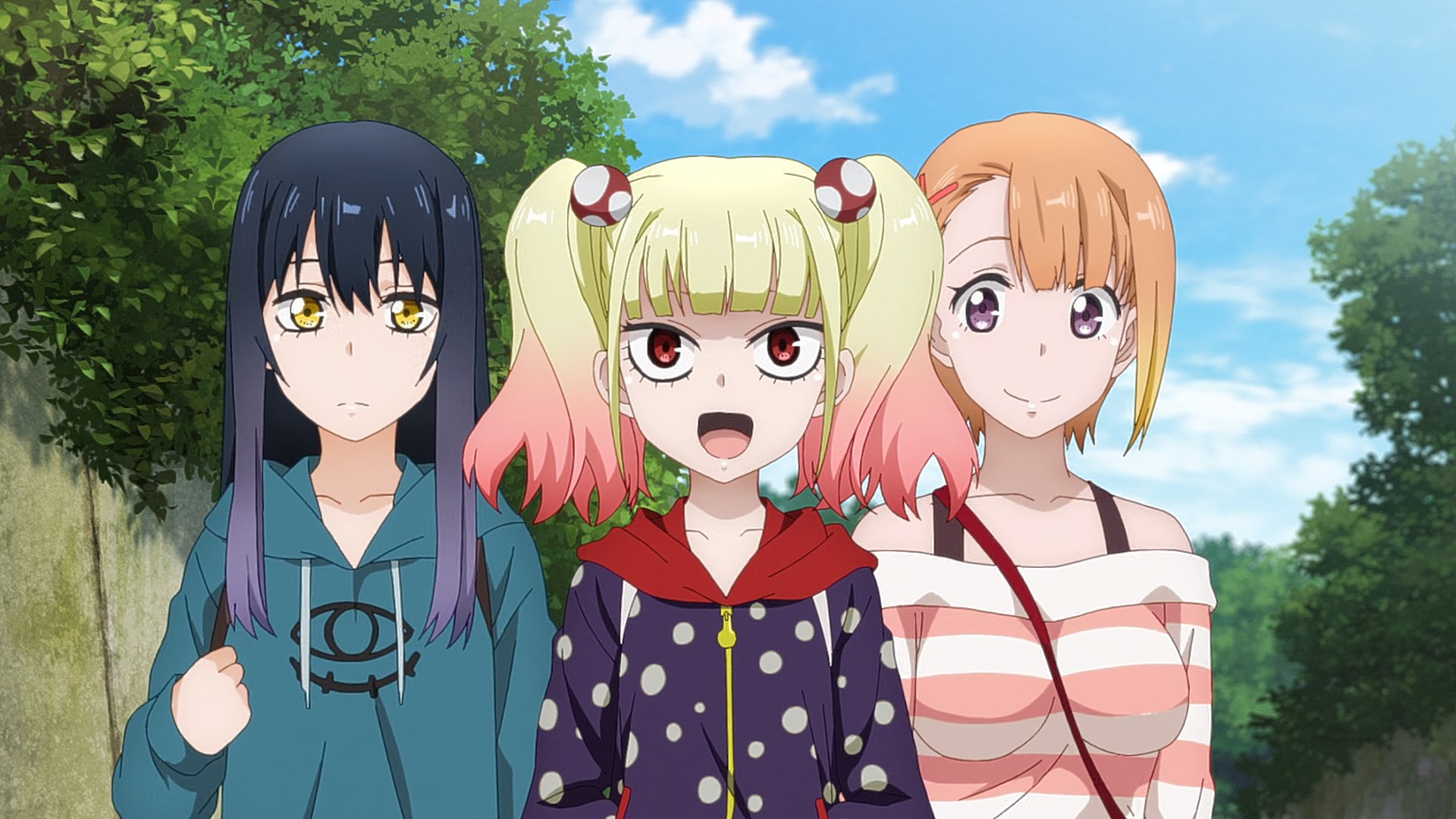 Walking into oblivion the girls take a step into this haunted tunnel. A drop of water drops on Hana putting her on edge but when Miko chucks a rock from inside her shoe this sends Yulia into a tailspin. This thrown pebble and Miko’s quick hand movements are mistaken for incantations to some mad ritual! Clearly unsettled Miko tries to reassure Yulia it is no big deal but this only sends her anxiety up another level as she takes her sweet words to be yet another challenge!

With ghosts coming into sight even Miko begins to get nervous so when Hana suggests to bail, she agrees wholeheartedly with the suggestion. Yulia stops the pair though by making an appeal to Hana’s ego! It works like a charm and she agrees to stay. Hana then decides to take a picture of Miko making her pose for the camera and right on que the ghosts decide they to join in! Miko struggles to maintain her composure much to the amusement of Yulia. 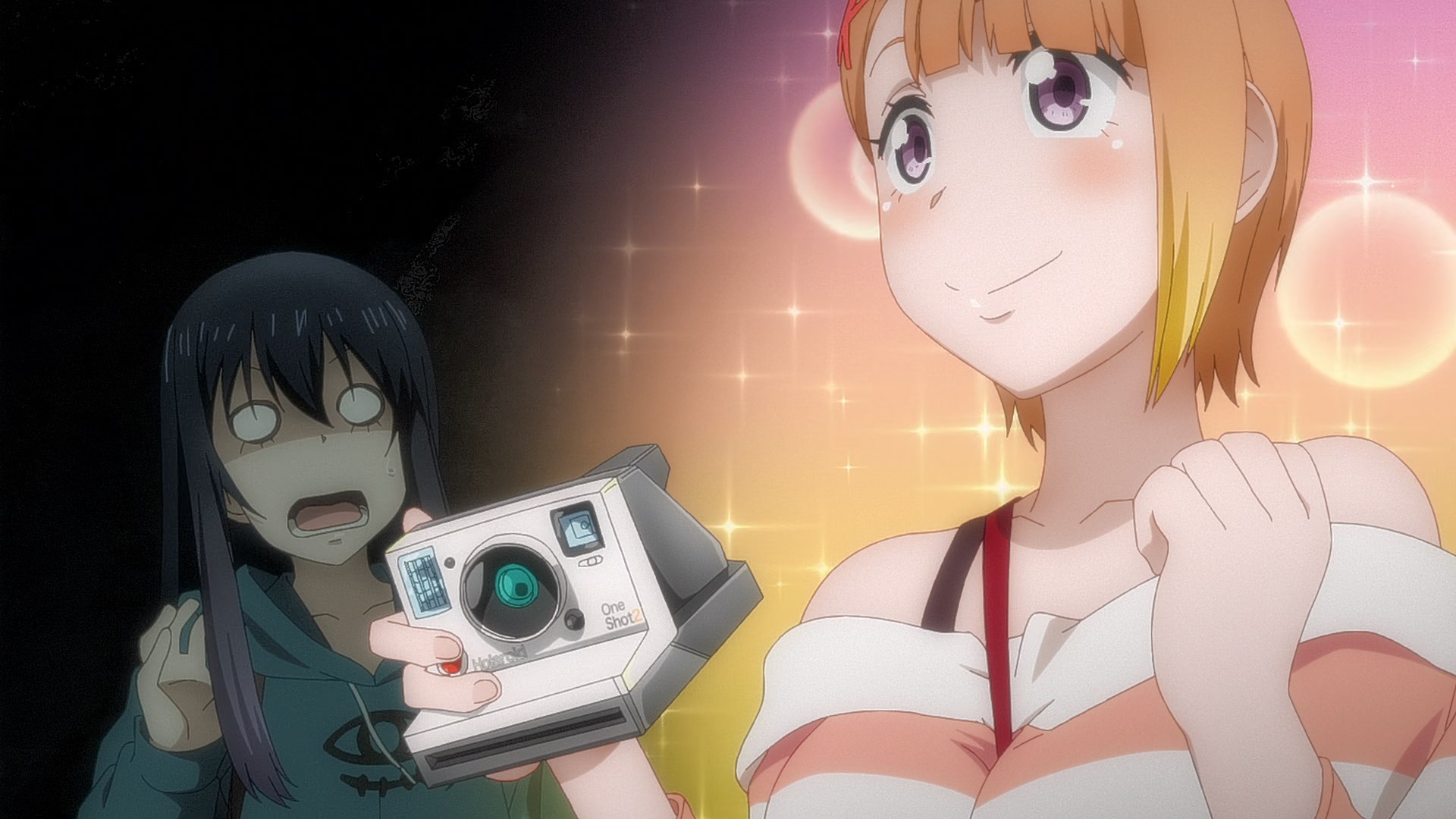 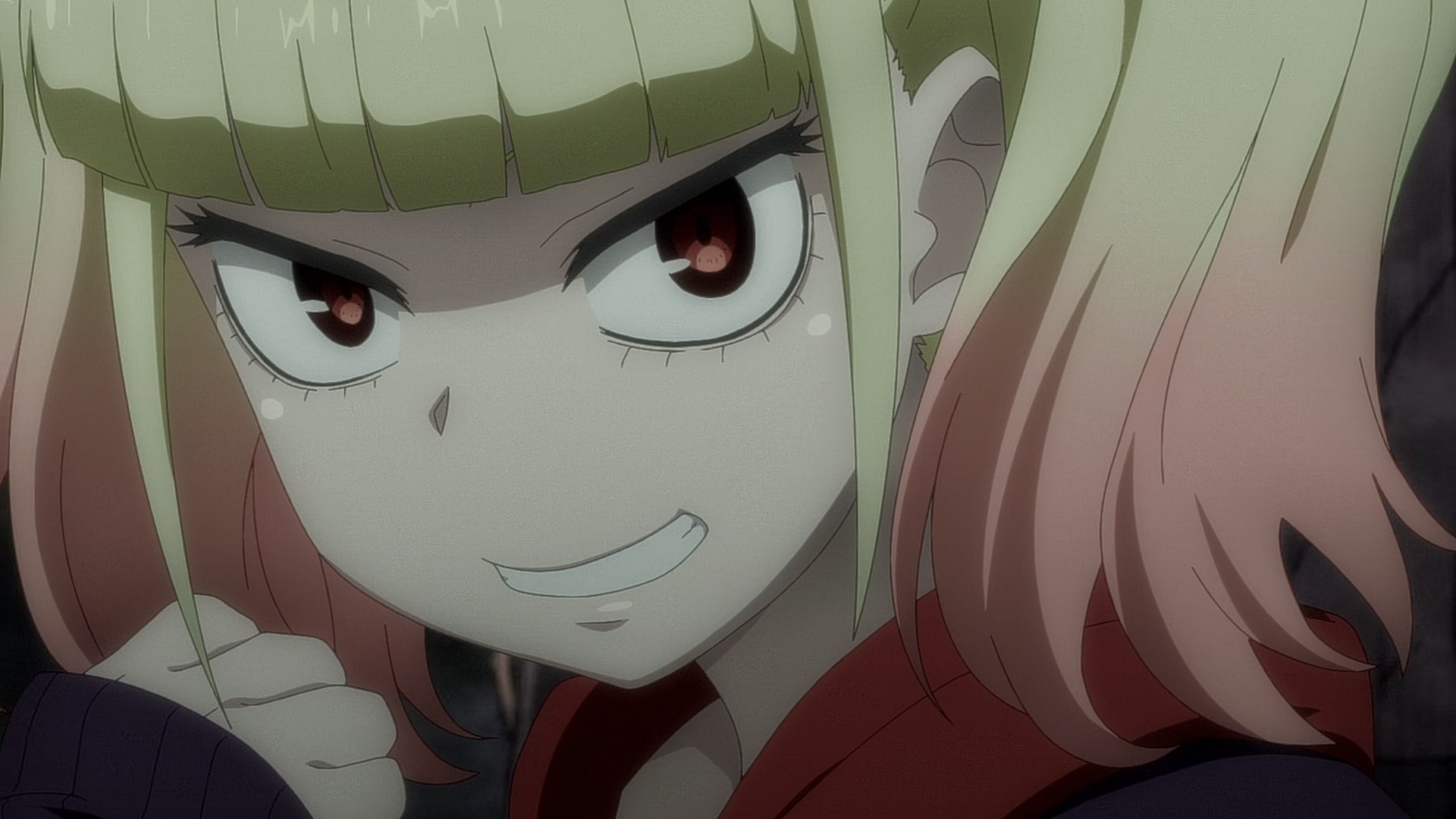 Sensing some imminent danger Miko wishes to leave IMMEDIATELY and just to make her even more sure she hears a loud bang suggesting something truly sinister will show right about now… Seeing the spirit get dangerously close to Hana, Miko stretches her arm out then clenches her fist instinctively. Yulia can only watch in shock as the monster is slowly devoured then swiftly disappear. As usual Yulia mistakes Miko hand movements to be an exorcism and when Miko nods to her if she can see the creatures but Yulia takes this as yet another challenge to see what she is capable of doing. She stretches her hands out in an attempt to perform an exorcism but to no avail. 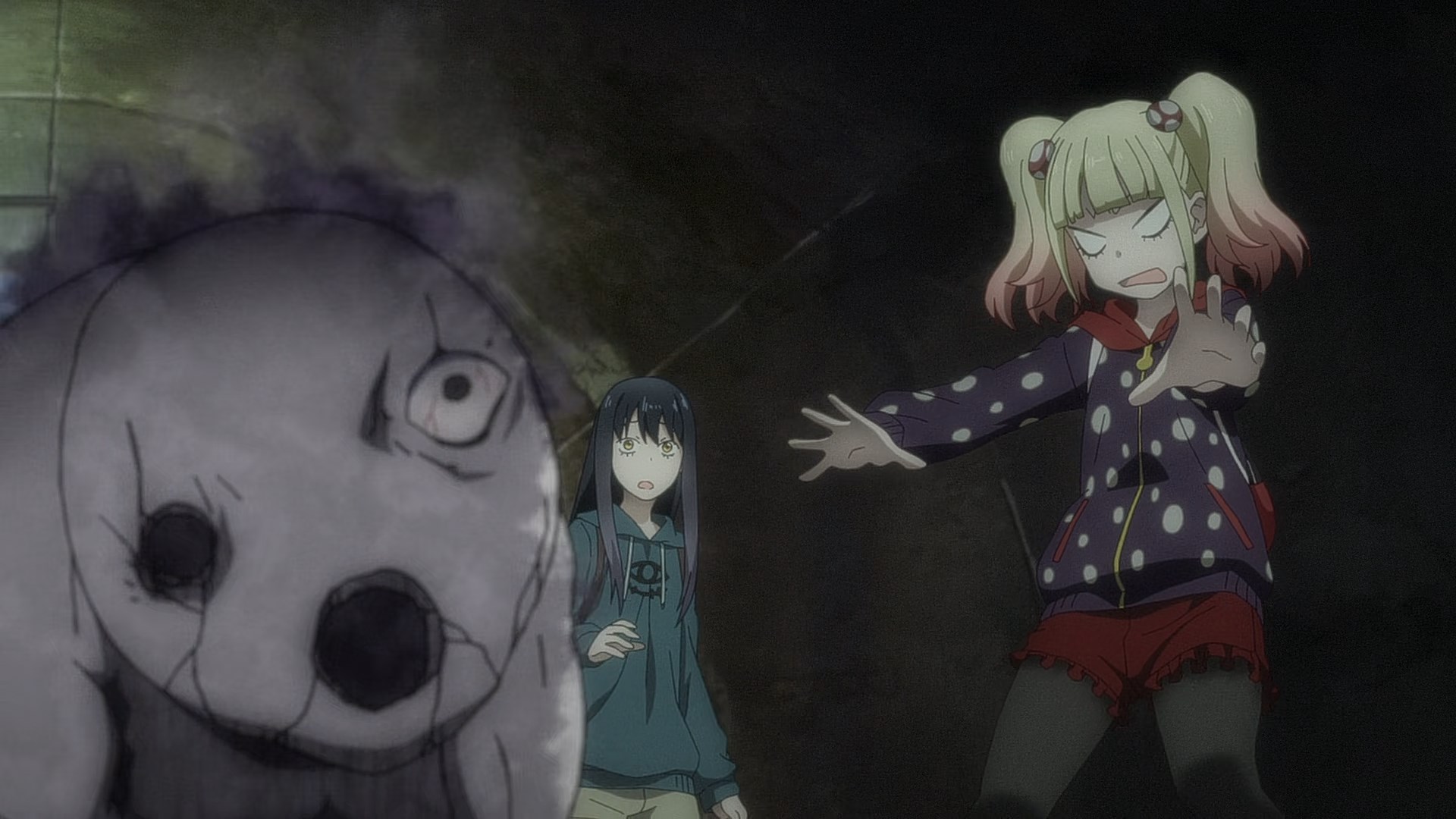 With Hana beginning to get jittery Miko tries to take matters into her own hands and attempts to herd Hana by telling her to avoid a spider. Just like that there is carnage as more ghosts are extinguished! Taking that to be another exorcism Yulia becomes increasingly flustered and attempts another exorcism of her own but this time it seems to work! Clearly happy with her efforts she tries to get the approval of Miko but seeing the creatures trying to pile onto Yulia Miko lunges, without thinking, and grasps tightly onto her. The ghost finally senses that Miko can see and attempts to attack but just at that moment the creature is stopped from the same shrine spirits from before. With that near miss the girls’ nerves are truly frayed and so they decide to call it a day.

The mood on the way home is sombre and the girls all remain quiet. Hana attempts to break the ice by grabbing onto both of them and takes a nice group selfie! 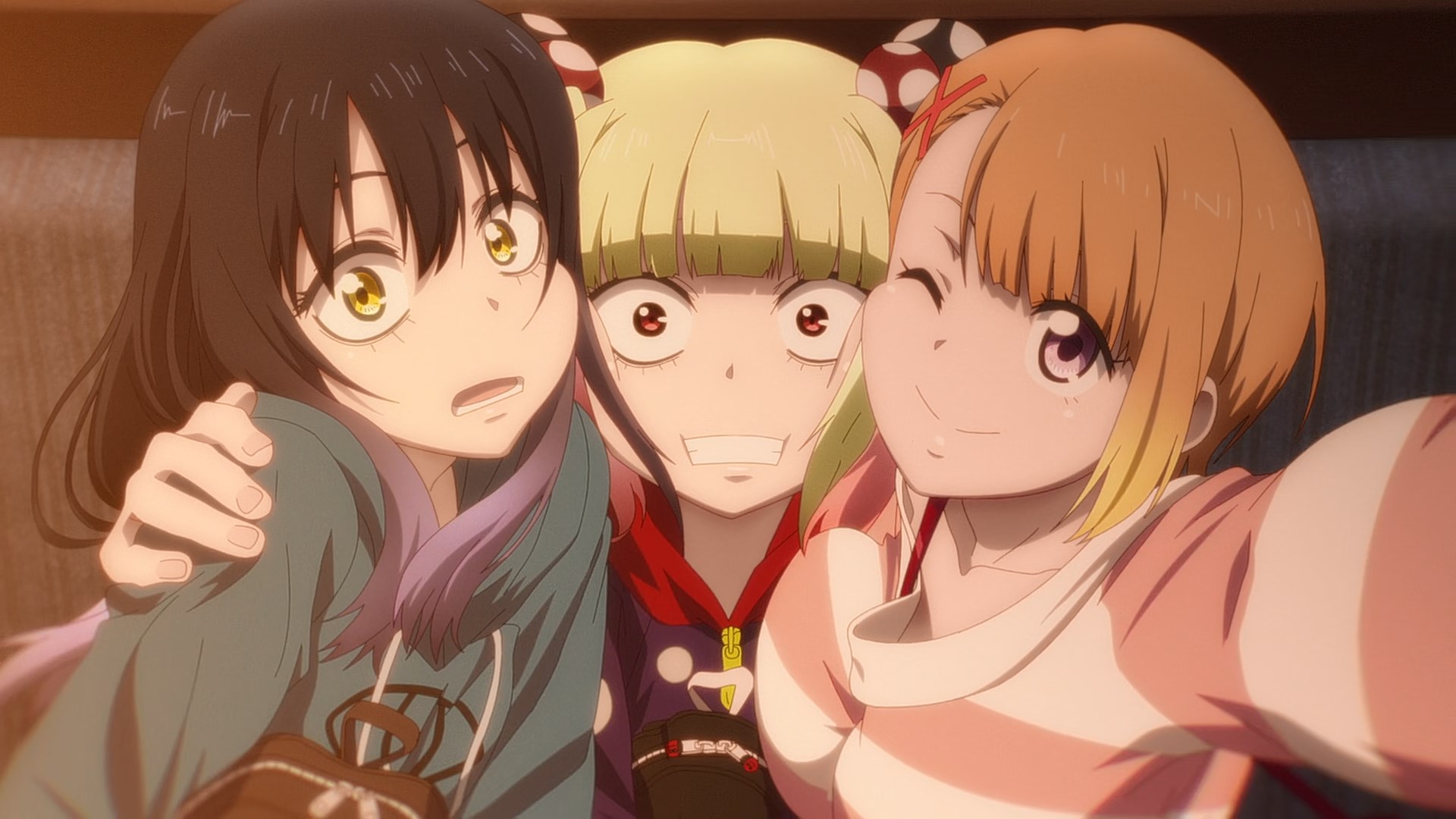 Looking back at painful memories and seeing the photo Yulia is touched and decides to save the pic as her phone wallpaper. Did the lonely girl just make a couple of friends just now?! Relaxing after a long day and a long journey the girls decide to have a bite from treats from their favourite store. It is here that Yulia begins to notice the light emanating from Hana as she scoffs down her cake. 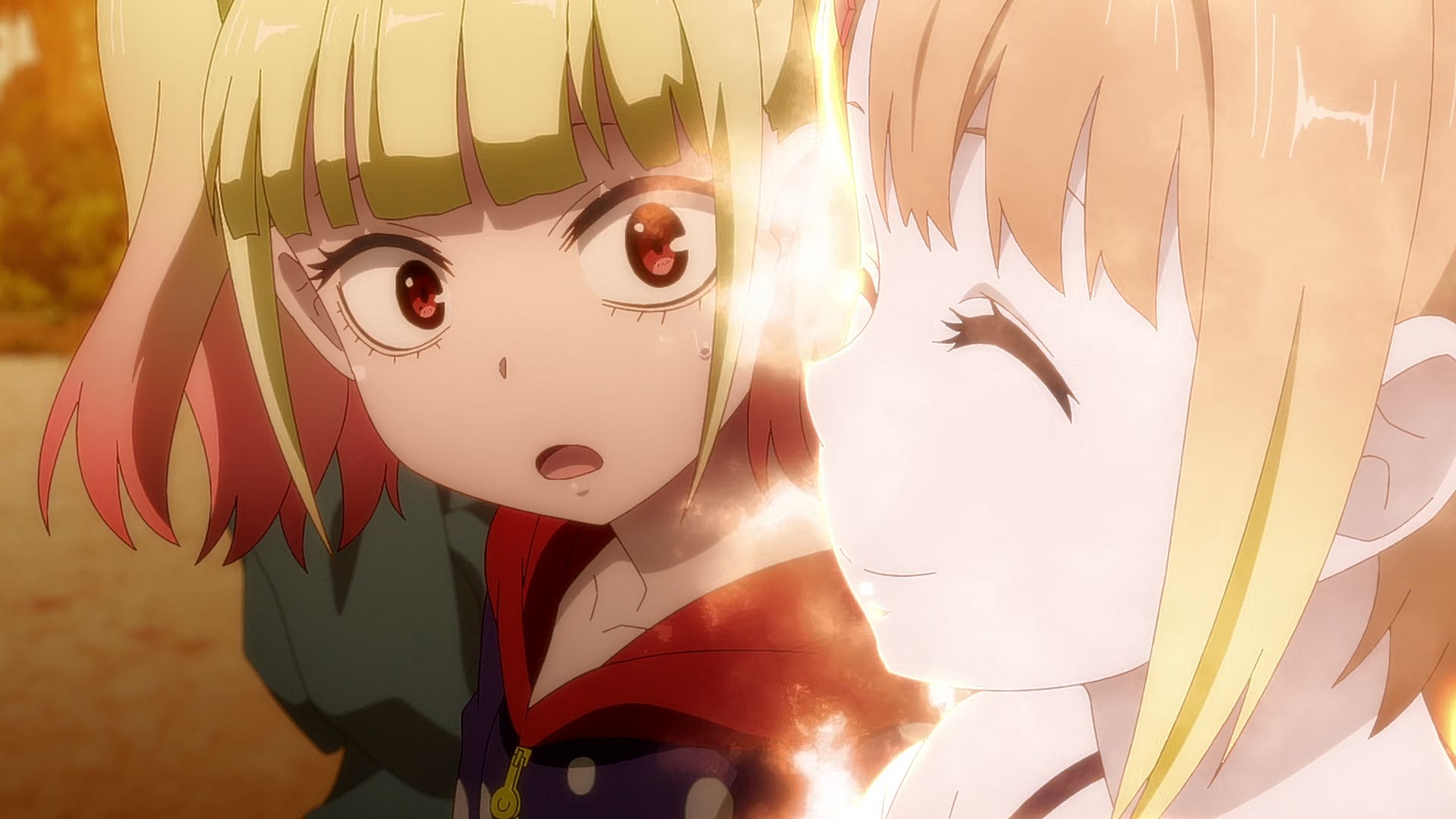 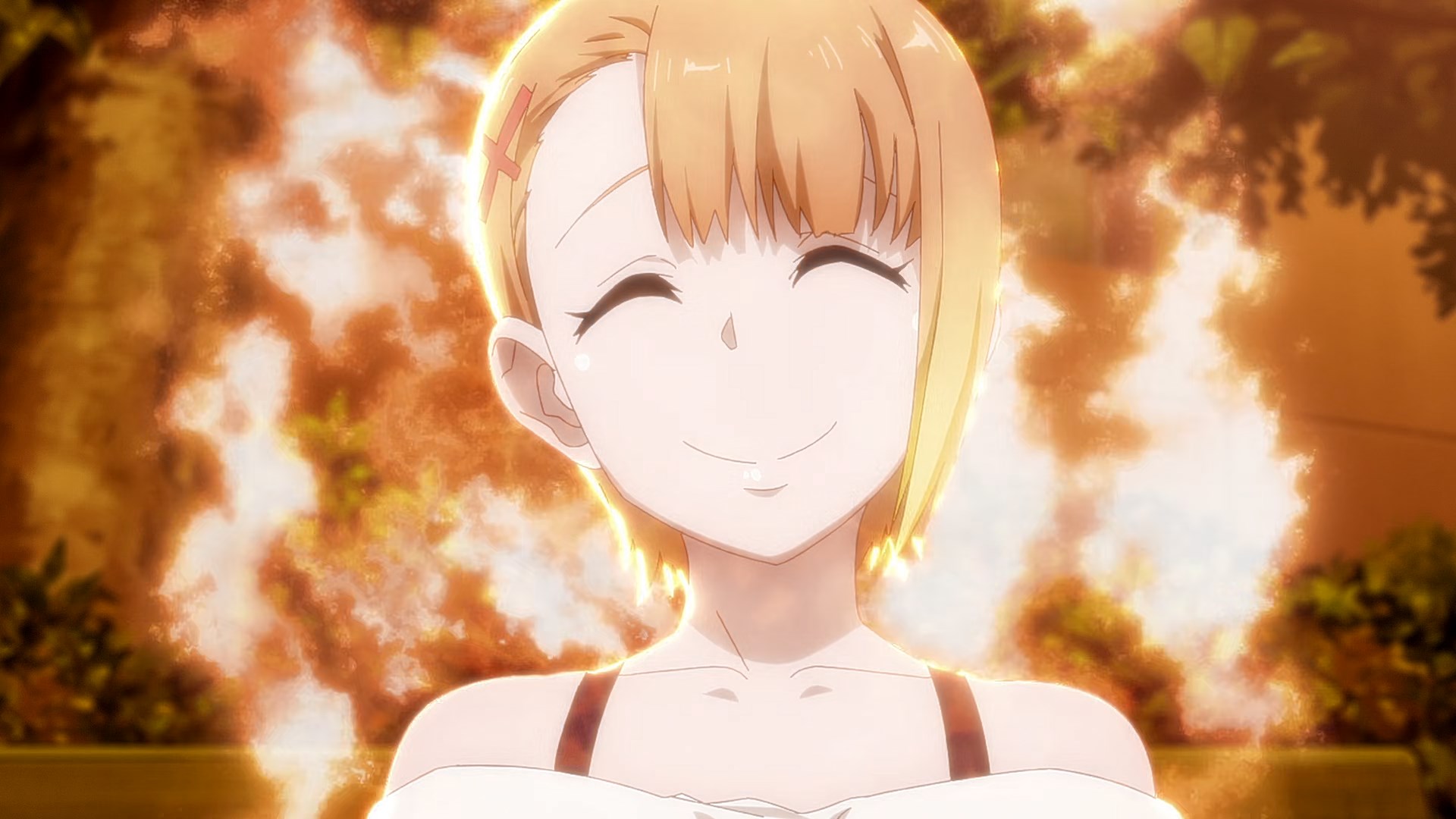 Miko and her younger brother Kyousuke are out trying to get a dress for their mother and when Kyousuke suggests trying the thing on Miko decides to go into a changing room to do just that. In the changing room it would appear she gets an unexpected guest! A sweet panty shot later and her brother begins badgering what the holdup is. 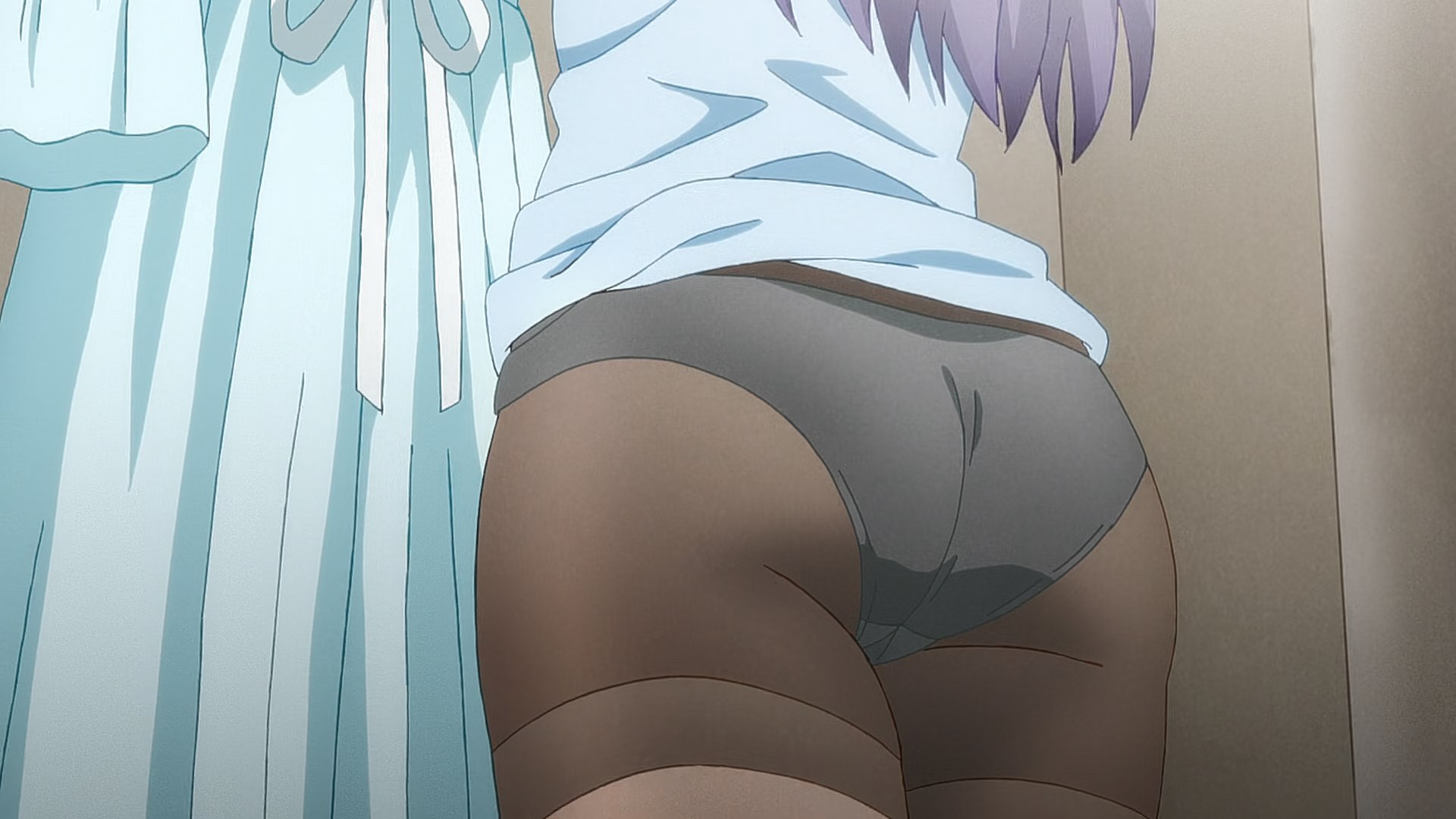 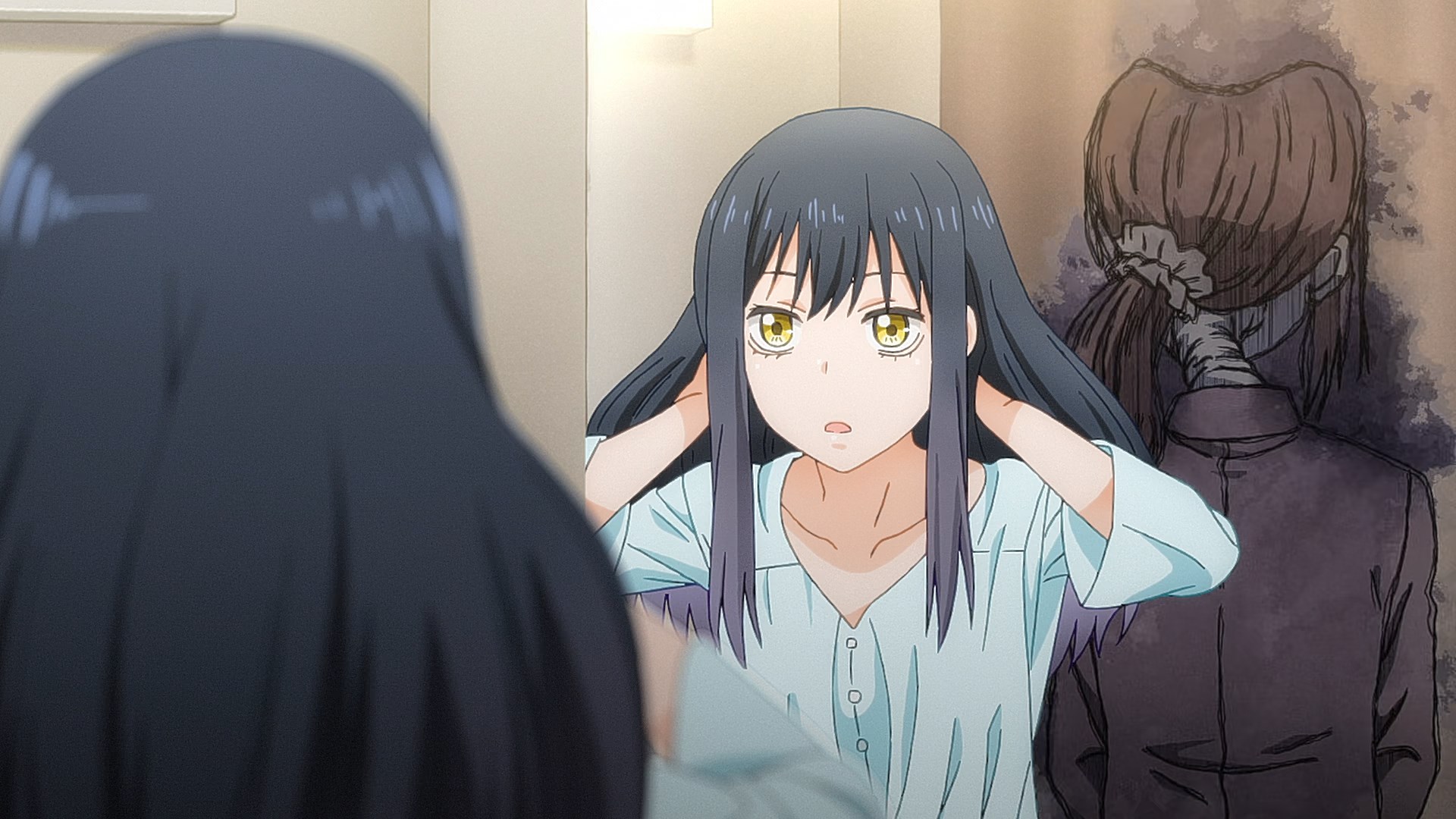 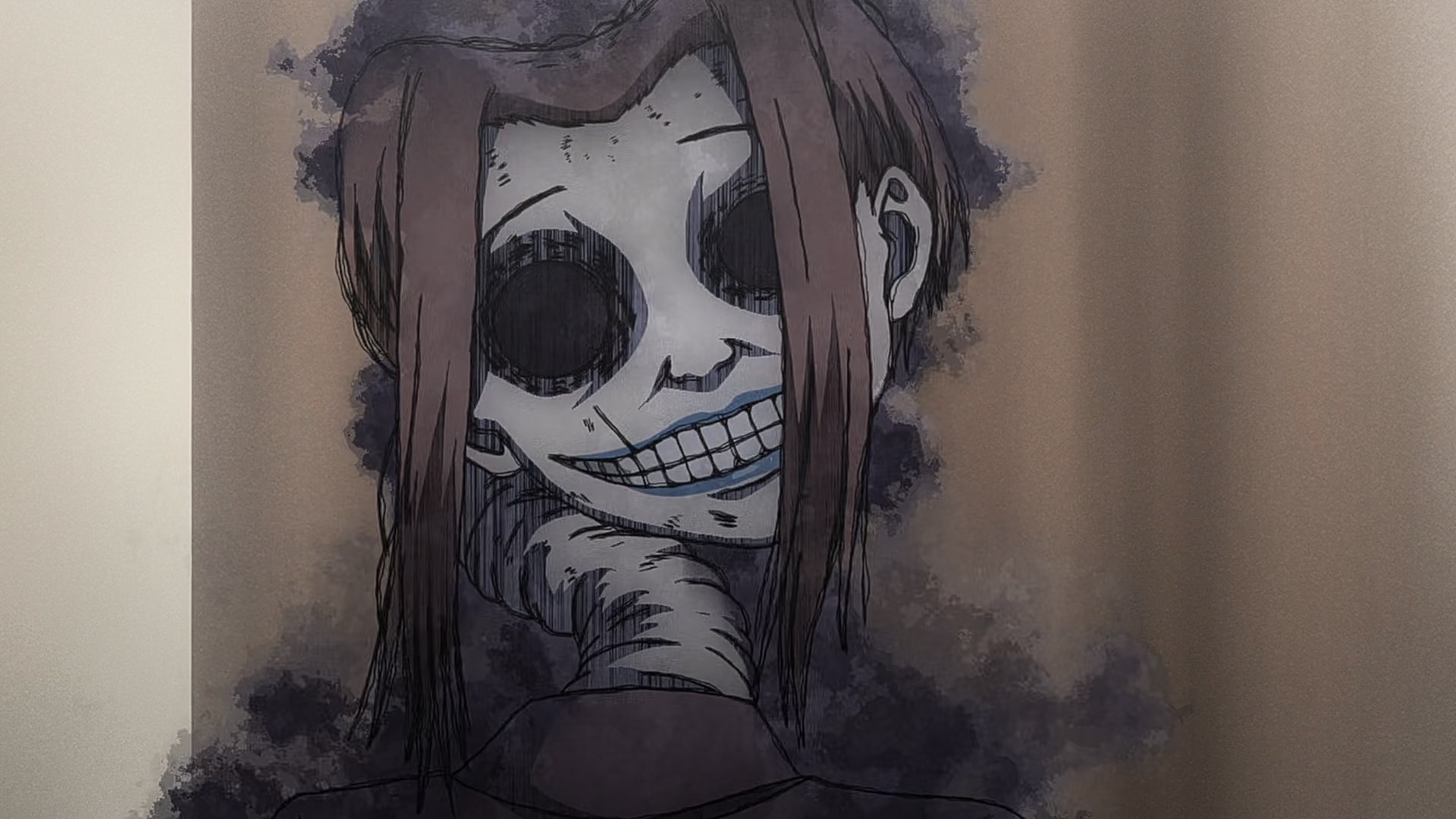 Putting on the garment Miko looks at the mirror in horror! The ghost is starring right back at her! Speechless and motionless she is like a deer seeing some headlights. Her brother getting vexed at the unreasonable delay opens the curtain. He looks for a moment and then complements her on the nice outfit. Miko is pleased but too frightened to change back so decides to pay for the dress and dash out the store! 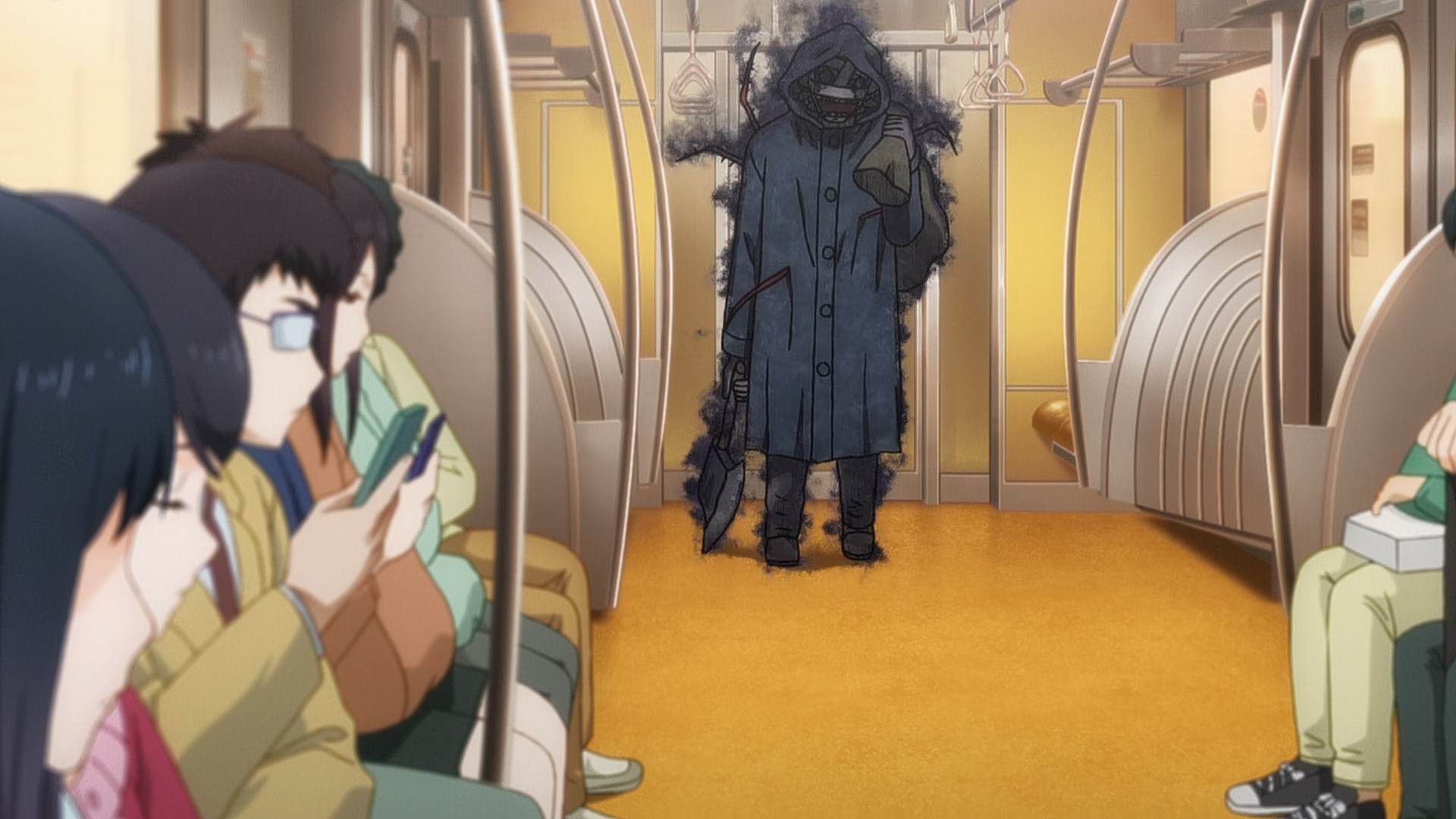 Taking a ride home Miko is happy and content with the fact they picked out a nice present for their mum but such feelings… Are short lived! Yet another ghoul appears this time it sports an axe and it swings the thing at sleeping passenger with it seemingly taking something from the person! The drama does not stop there however as the fiend goes through the passengers in a systematic fashion. As the ghost slowly makes it way to Miko she grows increasingly anxious and thinks of bolting…

But then a passenger actually does make a move which the apparition immediately notices and takes a swing at! Now knowing her option of running is sealed all Miko can do is wait in terror! As the ghost approaches the sleeping woman sitting ride beside Miko there is a black smoke that appears out of her mouth. When his axe connects another ghost in unleashed and it is quickly shoved into a bag. One would think this is it but this does not stop the mad ghost in its track and it swings at the Miko and the screen goes blank…

Later Kyousuke comes to and sees Miko standing and wonders what is going on. She tells him to leave the train and he complies but is confused as this is not their stop. Rushing out Miko says a detour is needed so she can get a new pair of panties. 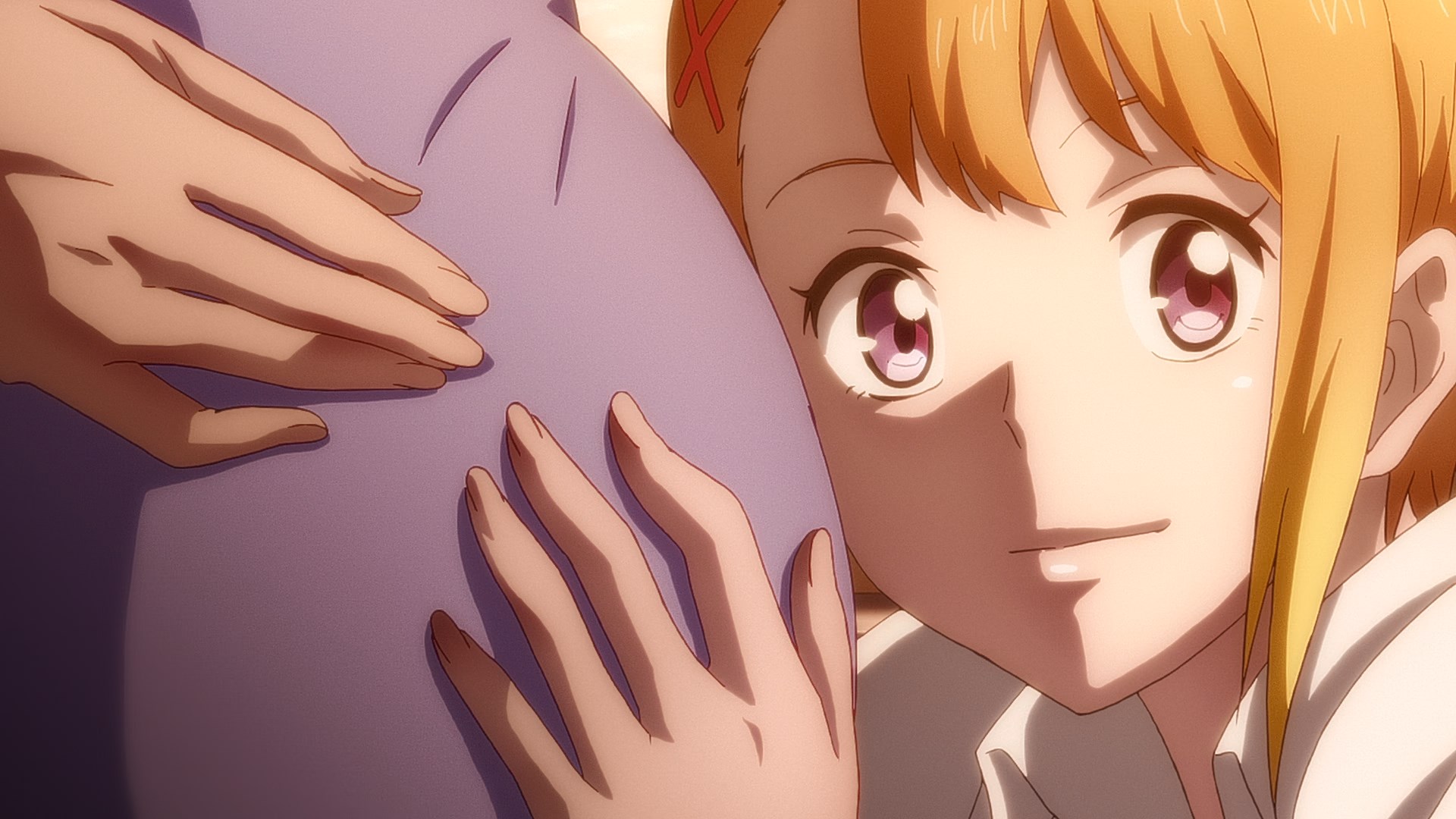 Hana feels her teacher’s tummy as she is pregnant with the expected child alive and kicking! She finds the babies kick adorable but unbeknownst to both there is a spirit circling around the pregnant teacher’s stomach. Worried about what this could mean Miko pleads for her teacher to take care. Taken aback she says that things should work out this time. When asked what that means she says that her first child sadly passed away but is sure things will work out this time.

Taking a late-night stroll Miko sees yet another ghost prowling around on the street. With the apparitions appearing in such regularity, she begins to ponder whether it is best to take her fears head on. But upon looking at the thing face to face she decides that maybe she should try that tomorrow. On the next day she meets Hana who talks about her own horror story of failing to get a drink due to scary moth sitting on the button on the vending machine. When asked why she stopped she did want problems to fly on her face. Taking Hana’s “advise” to heart Miko thinks to something similar but is then confronted with a shocker when they learn who their substitute teacher is… 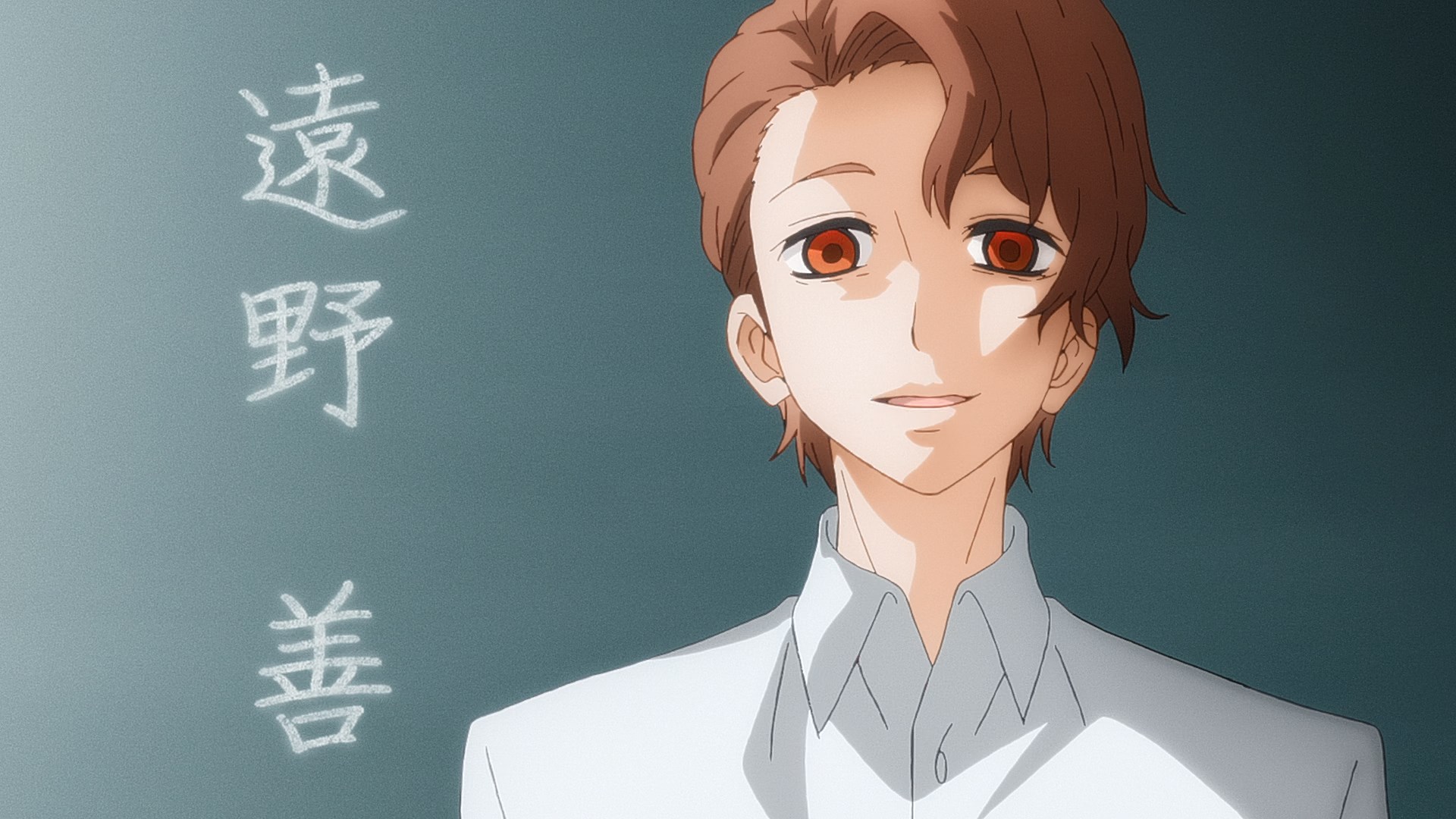 Yes, that is the same bloke they met at the park who wanted to take those innocent kitties for reasons that were surely evil. Hate the neko hater! 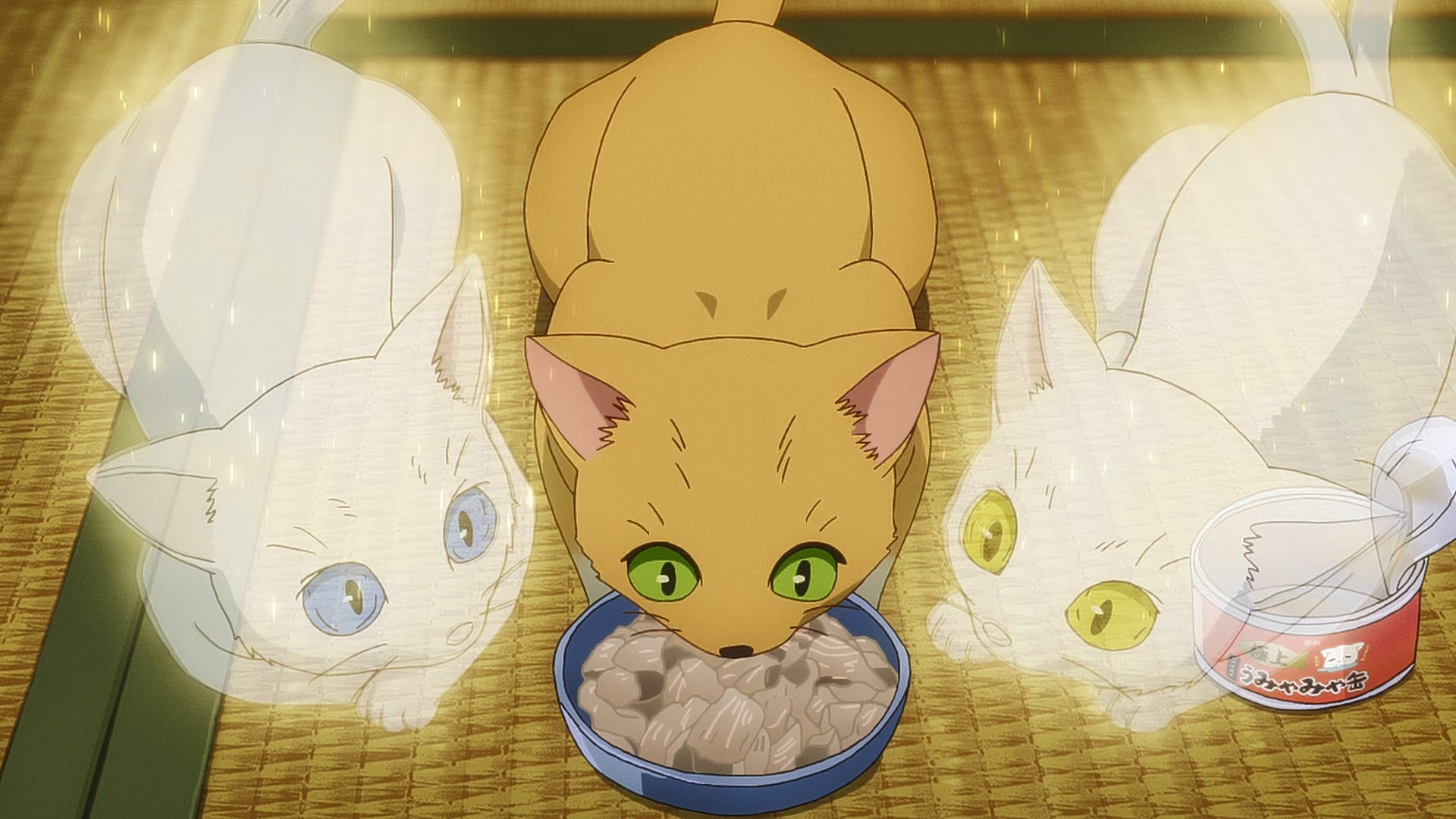