ef ~a Tale of Melodies~ 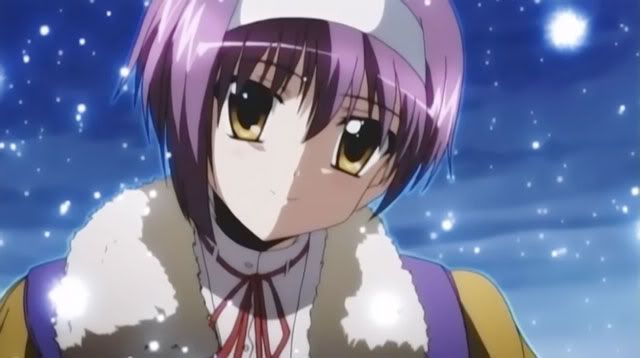 yes as most people have already heard and been informed, ef is indeed getting a second season.

The information was released at RONDO ROBE 2008 and then recently mentioned on Moon Phase Diary's website.

The same staff as the first season is currently in charge of the whole production, but who knows when that may change.

The focus will be primarily Mizuki and Yuuko, or so it seems.

Credit of sources go to many including Moon Phase, Moetron, and Animesuki, as well as senpai-kun.

This post will be updated as more information becomes available.
Last edited by a moderator: Oct 17, 2021

Watchlist NOT Updated
B

I wonder if they will explain more in depth of that camera guy's ex-girlfriend and the girl who so to speak guided everyone.

I am grateful since the first one was one of my favorite recent drama animes.
Regular Member of KKA/HMA. President of TLMA and ASA ^^

Kouhai
Wow I didnt expect a second season of this series. Im looking forward to it.

I really have no idea of what to say apart from that I was expecting a second season, even way before the original first season aired because I knew that it was almost impossible for the whole intricate plot developed for the games to be presented in just one 13-episode season and plus, there are going to be future games for the series which continue the story chapter by chapter.

Retired
I saw this news last night and they just released the very first promo along w/some additional info. like cast members etc. It seems (ANN) it will air this Fall 2008. The blonde girl a main character?

QUOTE (senpai-kun @ Jun 28 2008, 10:44 AM)I saw this news last night and they just released the very first promo along w/some additional info. like cast members etc. It seems (ANN) it will air this Fall 2008. The blonde girl a main character?

Promo Link: http://www.ef-melo.com/trailer.html
looks like the main site opened up while I was asleep

Sempai
QUOTE (JCDRANZER @ Jun 28 2008, 01:12 AM) and plus, there are going to be future games for the series which continue the story chapter by chapter.

That said, I'm very glad to see there'll be a second season since the first season was one of my favorites of 2007. I'm looking forward to it.
Key's newest game is called Rewrite. Click image to go to the Key thread.

Sempai
Yay I'am really surprised and happy about this good news!I've liked Ef a Tale of Memories lot because of it's good dramatic story,original design and beautifully painted landscape!This character were good s too and I think that this second season will be a prequel and not a sequel to the first one ....

Totally loved Memories, and if Melodies is anything like it, yay -happy dance-

Retired
Hamzaxxx, this is a sequel focusing on the relationships of the side characters or shall I say the main charcters of the chapter 4 and the connection or shall I say the link that ties Yu and Yuko together. I now all of this after watching the first season and doing a little bit fo research (namely just reading on various boards...LOL).

Oh yeah...I have a little speculation (I haven't played the game though)

I think Kuze could be the younger brother or older brother of Yuko. I think Yuko is dead due to the earthquake that happened in Otawa. Before, she died, Yuko and Yu were lovers and they had a child, who is Mizuki Hayama........okay it seems that this speculation is full of crap...since I just now came across of what the final 2 chapters of the game is about.........damn I wanna play the games and watch this anime as soon as possible.

Kouhai
I just saw the first episode and I think it was very interesting to see some of the characters we already were introduced to in memories from another point of view.

I also was really surprised to see Renji, happy because he was my favorite male character from memories. But especially confused, Did I just miss the whole thing of Renji and Chihiro living in Australia? or what just happend lol

I really love the opening theme btw, not as much as I love euphoric field but I believe this song will grow on me quick enough.

And one last comment about the first episode... Nagi was hillarious

, and I wonder is Nagi the mother of Kei and Chihiro, or related to them in any other way? She looks ALOT like them.. hmm.. I hope I'll find out about this in the upcoming episodes *keeps on wondering*

Kouhai
Well I watched it this morning and I decided to watch it again. This is great and somehow....the first episode got my attention unlike season 1 which didn't got my attention. I got enough patience to watch the rest and like it though. I wonder if this show is going to focus more on the current two or those two.....

Kouhai
I loved Tale of memories, yet watching this I might need to re watch Memories, because I don't remember shit. Episode one really captured my attention and sucked me in. I really enjoy a deeper look into Kuze and Himura. Artwork is abstract which adds greatly to this series and voice acting is excellent in my opinion.

Mizuki seems to be playing a large part (I enjoy her Neko-Mimi side), and I really enjoyed the interaction between her and Kuze, even though it was just talk in Kuze's apartment I felt captivated watching it again after it was done. Best part is when Mizuki opens the door on his Uniform collection

Opening song I am not sure of so far, I think it has to grow on me, so far Memories gets the opening point, ending still to be found out.

Yu, used to sexually abuse Yuuko....or Yu didn't protect her from getting raped ir sexually abused by someone else. I'm thinking this by putting some of the puzzle pieces together.

DAMN...I have to wait 5 more days for the next episode.

, and I wonder is Nagi the mother of Kei and Chihiro, or related to them in any other way? She looks ALOT like them.. hmm.. I hope I'll find out about this in the upcoming episodes *keeps on wondering*
No, you're way off. Nagi is referred to as "Hirono" by either Himura or Kuze (or maybe that teacher), and remember that Hirono is the family name of Hiro from season 1. So, at first I thought that Nagi must be Hiro's mother, but then I remembered that Hiro has a sister named Nagi, which they revealed in the first season, so I think the girl they showed is probably his (much) older sister. Either that, or she's his mother, and she also named her daughter after her, which I find less likely.

Anyway, I also loved the first episode. The sequence with Mizuki and Kuze really drew me in, and it had me thinking about it today while in class. I'm eager to find out more about these two characters who we saw almost nothing of, along with more about Yuko and Himura too.
Key's newest game is called Rewrite. Click image to go to the Key thread.

Kouhai
QUOTE (Juhachi @ Oct 11 2008, 05:53 AM)
No, you're way off.Â  Nagi is referred to as "Hirono" by either Himura or Kuze (or maybe that teacher), and remember that Hirono is the family name of Hiro from season 1. So, at first I thought that Nagi must be Hiro's mother, but then I remembered that Hiro has a sister named Nagi, which they revealed in the first season, so I think the girl they showed is probably his (much) older sister. Either that, or she's his mother, and she also named her daughter after her, which I find less likely.

Ah okay, It's just that the idea crossed my mind when I noticed they looked very alike. Now I really got interested in Nagi's exact identity.. thanks for explaining to me what you knew ^^~ I really should've re-watched memories before starting with melodies.. but then again, I'm not someone who catches things like this quickly. =p lol

Retired
Since episode 2 just came out I'll put my comments in spoiler tags.

I'm glad that we saw more of Yuuko and Yu and their past. I can understand why Yu wants to keep everyone at a distance. Seeing his sister die in a fire right before his eyes, unable to help her is very traumatic in itself. And then after finally opening up a bit to Yuuko, she left the orphanage. Yuuko seems kinda mysterious, like she's a ghost that randomly appears, yet I'm sure in the memories she is really alive.
Kuze is another mystery. He seems like a carefree happy go lucky guy, at least in highschool, and even in the present, except that's all on the surface. In his mind we see two images of himself, both wearing masks, representing his outer and inner self maybe? He seems to want to erase any connections he's made with women, even burning a letter from Nagi?! I guess that hints that there may have been something between them.
Mizuki fell for him pretty fast huh? I wonder how Kuze is going to respond to that confession in the next ep... this is an excellent series and I can't wait to see how it will continue

Retired
Episode 02 had everything that made ef soooo good plus more, this series just keeps getting better but I slightly confused but I guess we will only really know all the deatils of this story at the end, with the whole Yuuko thing. Also, I remember seeing Mizuki in the first season and I though she looked too young and annoying but she is seriously SHINING in this series and I really really like her character because of her cheerful behaviour, her strength and the fact that she looks more like a woman than just a young girl....basically the vibe she gives out is enchanting. Also her open-ness is very creditable, which led to her confession to Kuze but of course some of us here already know whats going to happen, I know a fair amount of whats to come but not everything and is the reason why I'm watching this series closely to pick out the details.

Kouhai
i might be wrong but at 11:34 is that another touhou tribute?
You must log in or register to reply here.