Opening Theme:
"Take Your Way" by livetune adding Fukase from SEKAI NO OWARI

Ending Theme:
"Be" by Song Riders

Synopsis:
Mysterious invaders called the Septentriones arrive in Japan and begin attacking the country on a Sunday. To fight back, the heroes in Devil Survivor 2 signed a pact with the devil to become the Thirteen Devil Messengers. The Septentriones show up at least once a day and you have a time limit of seven days to defeat them.

Edit: Changed the first post again to make it a bit more informative. Last one I will touch

So now we see what it would look like if BTOOM! married Pokemon and had a child..

I'm not knocking it. It still has the potential to be decent, but I'm nervous about this one considering the way it is starting. In truth, my favorite part of the whole thing was the ending theme. ("BE" by Song Riders)

This one goes in my "wait and see" pile.
Funny from Kono Suba and Yummy from Grimgar

Kouhai
This anime's actually worth the watch. Yea, it seems like some fixed ideas from Btoom , but hey, give the anime some chance. Sword Art Online started out from nothing right? Let's give this one some chance to pull back and BRING IT ON. Plus, this one's derived from a game in Nintendo DS called Devil Survivor.

Kouhai
QUOTE (Anybody @ Apr 06 2013, 09:48 AM)I just love how the posters above are completely ignorant of the fact that SMT franchise has been running on variations of this for years(considering first shin megami tensei game came out in 1992)

I don't recall commenting about this in any way.. Perhaps a re-read is in order?

I also don't believe that SMT's history is in any way relevant to my opinion. Something from 1967 could feel like BTOOM! meets Pokemon, and as I stated directly, I am NOT knocking it.

Sorry, but using terms like "I just love how the posters above are completely ignorant of..." just seems uncharacteristically "aggressive" compared to the friendly exchanges of ideas and viewpoints that I have come to enjoy here at FansubTV's forums.
Funny from Kono Suba and Yummy from Grimgar

Sempai
Comparing something in the way you did means assuming that to WHAT you are comparing came first. Any sort of comparison like that(game A looks totally like game B, etc) IS ignorant at best, since one assumes that there WAS an original source from which the element of fictional work is derived.

Comparing this to Btoom(which was average at best) implies that you think that this show was in some way taking elements from Btoom and stuff like that usually pisses off people, especially those familiar with source material, so that's a big no no and usually one SHOULD do some research on the topic to choose the appropriate wording (as in knowing whether it was actually inspired by it or on if it blatantly copied it or on if its just small resemblance due to similar tropes used)

And frankly such a comparison is in no way apt since dystopian disaster setting is quite common in anime(especially in supernatural or scifi genre, as you get at least 10 different versions of "destroyed tokyo" every year) and as far as I know this in no way indicates on it being a death-game competition between people.

Also as a side note, the opening post of the thread - it might be good idea to add actual information about the show instead of it being three sentence context-less opinion.

Kouhai
QUOTE (Anybody @ Apr 07 2013, 03:59 AM)Comparing something in the way you did means assuming that to WHAT you are comparing came first. Any sort of comparison like that(game A looks totally like game B, etc) IS ignorant at best, since one assumes that there WAS an original source from which the element of fictional work is derived.

I see that you are indeed passionate about this, so I am stepping-out of this subject line. Please know before you erroneously insult other posters however, that there is no defined OR implied reliance on chronology when using the comparison method.

1
: the act or process of comparing: as
a : the representing of one thing or person as similar to or like another
b : an examination of two or more items to establish similarities and dissimilarities <his faults seem minor by comparison>
2
: identity of features : similarity <several points of comparison between the two>
3
: the modification of an adjective or adverb to denote different levels of quality, quantity, or relation


I hope that you continue to enjoy posting as I have come to enjoy polite and insightful discourses with the other Posters here at FansubTV.
Funny from Kono Suba and Yummy from Grimgar

Sempai
Second episode was still great although they are straying from the game plot quite a bit, both in story and in character interpretation and in cutting away parts of storyline.

First of all, Dubhe was far bigger deal in the game( invulnerable to demon attacks and only being capable of being defeated after the truck event ), while anime treats it like fodder level henchman monster thing.

Then you have Io...I am not sure what anime is trying to do with her. Hopefully we will see her progress and harden up little by little, since currently she is the opposite of how she was in the game. ( In the game she was the one to figure out what the deal is with Dubhe and septentrions, while in anime for some reason Yamato gets all the credit . I am kind of hoping that since her character was kind of flat in game, we will see her grow into how she was in the game, slowly but surely.

I am okay with main character owning Baihu(hint in SMT games its one of the most powerful monsters you can acquire, as well as highest level Temperance arcana persona in Persona games) since the very beginning, since otherwise the anime would have to spend time with protagonist grinding and fusing monsters for 20 episodes, although I hope anime has an explanation on why the protagonist can summon something so powerful since beginning.

Even though I am okay with that, it does not change the fact that its ridiculous: 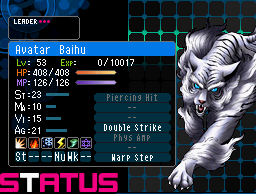 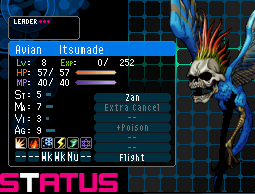 Baihu, a lightning based demon that STARTS at level 53 being put against lvl8 enemies that are WEAK against lightning? Yes....

Also I can't see on how they will fit this into 12 episodes...

Otherwise its an enjoyable adaptation so far and they are doing a good job with protagonist's personality. Still no idea which ending anime is aiming for, but we'll see.

Sempai
Another great episode. Not much to say.

THey implemented the auction in quite a decent way, nice.

Good bait-and-switch with Keita surviving only to die . Perfectly sets the mood up.

I do hope that they are going with the game route where Yamato dies, because frankly it never sat well with me that he just ended up surviving unpunished in the "perfect' route...

Retired
After doing a little research on this while making the first post, I think I will give this one a try. I was worried it would turn out too much like Persona 4, which had a strong beginning and end, but the middle was really "MEH."

Kouhai
Im just posting this in case someone hasnt realised yet. I realised this, or rather confirmed it after keita died. The anime isnt going after a different universe story line, rather its the same universe, in another run. Ill explain as simple as i can, but basically, there were many endings in DS2 right? well i know a lot of people would normally think that daichi's triumphant restorer ending is the true ending but thats wrong, the "last ending" and therefore the true ending would be Ao's "triumphant" ending, why? because they destroy polaris and end up with a free world, free from what? polaris? yes but more than that free from an endless 8 loop.

Why am i saying this? well i said last ending because it is, when you get daichi's restorer endings they show you that they dont retain their memories, things seem slightly different like in Haruhi's endless 8 loop arc, so its basically the same as endless 8 except some endings are clearly not that similar, when they clear Daichi's route they have different details because they keep remembering in their subconcious that they are looping, thus little by little they get closer to getting out of the loop which would be Ao's ending. That and the fact that every other ending except Daichi's and Ao's say "however" and "error", so that means that polaris ends up fighting mankind again even in ronaldo and yamato's routes, hence loop to day 1. Ao also said it in a skit, that "this wasnt the first time mankind fought polaris", so if you put that together with the fact that keita died int he anime, plus that Ao doesnt call him "bright one" "yet" its mostly clear that all of the endings were canon since they are "in the same timeline" so to speak, they go back to the world before day 1 every time they fight polaris, until the true end which is Ao and Hikari overthrowing polaris. So that would mean that the animation is in a "run" before the ones from the game, meaning when they were still incompetent and couldnt defeat polaris without loosing a lot of members, like Keita who died before day 7 here in the anime. In example, lets say that the order would be, ronaldo, yamato, daichi, daichi restorer, and then Ao's ending, they all happen and are cannon because there is an endless loop, once they finish one ending they go to the next, or repeat the same ending until they change ending like in Haruhi's endless 8, well if thats whats happening then i believe the animation should come before ronaldo's ending, but not being the first run ever, because obviously Hikari has a demon from a previos run (Byakko)

last update; JUNE 27 Street Meatballs messing with your cyberspace? call Viktor now for a permanent Iface upgrade! We will reconfig your dreck beyond evil!
A