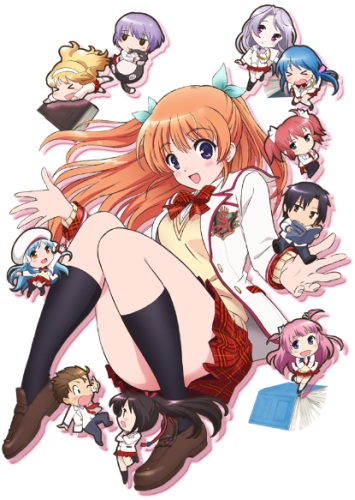 Plot:
When he was young, Kyoutarou wanted to read all the magic books in the world, but they were all in the magic library. Someone told him that to get there, he must be kind to everyone and bring happiness to their hearts. He received a bookmark, which was his entrance ticket to the magic library.
One day while heading to school, he received a text from the shepherd (hitsujikai) telling him that his fate was going to change. He had a vision of an accident at the tram station and helped prevent any injuries by calling away a nearby girl. That girl, Tsugumi, later came to the Library Club room, which he was a member of, to thank him and also to ask for his help to make Shiomi Academy more fun. It seemed that she had also received a text from the shepherd, who is rumoured to appear before people who try their best to grant their wishes. One by one, other students also join their group with the shepherd's guidance.
(~from AniDB~)

Sempai
Not bad, of course its begin was a bit... overused with the certain incident.
After the first episode you can already get a picture of what the goal is of the plot. I have to get a little bit used to its animation for some reason, it is different from others in my eyes, I guess.
In the end, I think I will enjoy this serie. Although it can always change depending on the rest of the episodes of course.
N

i am not sure about this series. It can be nice with the shepherd mystery and the girl who states that he forgot. However i fear it will become one of the standard harem series which looses its plot halfway through the series..

Sempai
Well, Episode 10 has aired and with only 2 episodes remaining, with the 11th episode being called : Decision, I hope he does not go for the typical : Become a shepherd, realizes something important he left behind, tries to go back, they forgot about him, he tries to make them remember and in the end it works!... seriously I have seen such cliches in animes and mangas about 14 times now.
Oh well, can't be helped, just got to wait and see next week for the cliffhanger for the last episode on the 24th.. I do got a issue on characters, but it is the typical harem issue (Nobody can be Fully straightforward with 1 and other..The Main male protagonist with 1 of the female protagonist that is.
Overall on the other hand it is a funny anime, my biggest irritation however is the whole Song princess... that part is being brought up and dropped without it ending for 3 times now.

Was this a good show? yes. Is it worth to recommend? not sure ..
As I have stated in my post of Dec 11 with the cliche.. they did not go for that thank god! I was worried it would turn into the 15th time that something like that happened in a anime/manga that I have seen.
Now going more into detail (No I'm not going to spoil the ending..use Wiki for that). I still hate the part about it being a harem, yes it makes it a little bit more fun, but the whole not being straightforward will get annoying very quick! At least the plot about becoming a shepherd was not dropped during the series, yes for about 5 out of 12 it was in the background which makes it weak, but it at least came back more during the last few episodes up and till the end.
Issue on Song princess... remains unsolved.. I still have no clue, how that was actually finished?... did she make her choice? last I recall was only Kakei giving her some encouragement.. that's all! (F.Y.I) I do not count the last episode to give a clear answer.

There is actually a OVA coming out tomorrow (25th)..But, I never comment on such things so.. Score time!
Overall, my rating for Daitoshokan no Hitsujikai : 6,6/10
Animation: 7/10 (It was nice and well done during its chibi moments, but in the last episode you can Very clearly see how it somehow does not mix during a few scenes).
Story: 6/10 (As I said, it was good, but also weak and recycled.. especially the song princess bits).
Characters: 7/10 (Putting the song princess *Senri Misono* aside... There was still the subject of attention, some characters gotten more attention then others with scenes and even two of them admit not getting it *cat and... what was his name Takamine?* and there is my point, you quickly forget about them, hell I forgot about Tamamo Sakuraba (Black hair in a ponytail) for 2 episodes).

So.. end comment? got no clue, it is a fun show, it had moments that stay in my head even after 8 weeks on a daily basis, it had a bit of a weak story line, it had some wisdom.. I'm just not sure about recommending it. It has a satisfying ending.. but also not great :/. I leave the choice to the viewers them self, for me it was a one time only watch.
You must log in or register to reply here.
Share:
Facebook Twitter Reddit Pinterest Tumblr WhatsApp Email Link
Top