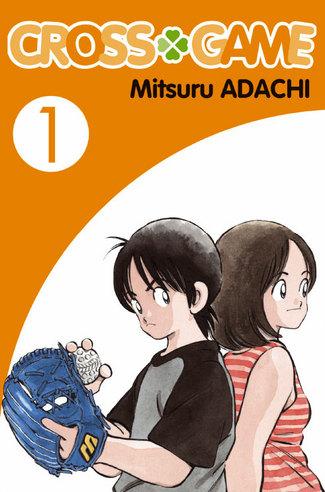 KÅ Kitamura, son of the owner of Kitamura Sports, lives in the same neighborhood as the batting center run by the Tsukishima family. Due to their proximity and the relationship between their businesses, the Kitamura and Tsukishima families have been close for many years, with their children going back and forth between the two homes like extended family. Because KÅ and Wakaba are the same age and always together, Aoba is jealous of all the time KÅ spends with her older sister. Aoba is a natural pitcher with excellent form, and KÅ secretly trains to become as good as she is, even while publicly showing little interest in baseball.

if you love the classic anime "touch" or an anime sports fan, dont miss this anime its a must watch!!! its not really heavy on sports and is mostly romantic/slice-of-life kind of genre. if you like major, chances are you will like this anime too.

for those who have seen touch, its almost like it but much much better. cant wait for this one to come out. so far i read the manga and its actually pretty good. im so happy that this one is coming out...hoping it would be a 100+ episode. the manga is still currently running and has won a 2009 Shogakukan Manga Award for shÅnen manga.
http://www.youtube.com/watch?v=gErblJTyMi0

Retired
I'm actually really looking forward to this one, since I started to watch Touch recently, and I really like it

Anyone knows who the seiyuus will be, going by that picture that anbu-black-ops posted?

Retired
QUOTE (julezia @ Mar 13 2009, 10:47 AM) I'm actually really looking forward to this one, since I started to watch Touch recently, and I really like it

Anyone knows who the seiyuus will be, going by that picture that anbu-black-ops posted?
Its not that....its good but I have seen too many baseball ones......but one outs is different. =P

Retired
I'm not watching it for the baseball, I'm more interested in the romance/drama

For me, the baseball is a sub-plot lol well I don't mind it, at least I learn more about the game as the anime goes on.
There's hardly any info on this anime... anyone know when it might be released? Since there's so little info, maybe it'll be released mid-April

its much more closer to touch than h2. especially during the season of wakaba arc in the manga. after that arc, it goes on a different path... its still similar in a way but different at the same time. its like touch but with a "major twist".

and whats wierd, in the manga sometimes the characters talk to the readers (breaking the 4th wall) but im not sure if they'll be able to incorporate that in the anime but its funny.

the relationships of the sisters here kinda reminds me alittle bit of minami-ke, just alittle bit.

all in all, if your hungry for another touch anime or just looking for a romantic sports comedy with a slice of life feel to it, then this is the anime for you.

im curious too see how the animation desgin will look like. anyways i hope the manga ends soon... so it can be animated asap. lol. cant wait for this one next month hopefully or not.

Retired
The first episode was nothing short of amazing.

The ending theme coupled with everything Kou was dealing with had me on the brink of tears.

Wakaba-chan is so cute!
G

Kouhai
I read the manga for this one for a while but then the releases stopped coming out for a long time so I never picked back up, but it is a really good story. The humor is a little dry at times, but the characters are developed really well. This is goingto to be one of my "must watch"s.
"It's a simple question really; would you eat the moon if it were made out of ribs?"

Retired
This is possibly the single best first episode to any series I've ever seen.

There are a lot of shows that could probably try pulling this off in the very beginning, but I don't think any could match just how sincere and true the feelings are portrayed at the end of this episode. Not to mention the superb music accompaniment to go along with everything that Ko was feeling.

I usually don't watch sports anime, but I will definitely be keeping with this.
<p>

Retired
I've seen most of Mitsuru Adachi's other series Touch (one of his many others), so I knew that Cross Game would also be a quality anime, but I didn't expect the debut episode to be THIS good. I totally agree with you Barbo, that not many animes can pull this type of beginning off. After it ended, I was just staring at the screen while the ED was playing, in awe because of what I had just seen. lol
I'm not the biggest fan of baseball either, but somehow Mitsuru Adachi manages to incorporate it in a way to get you into it. You want the hero to win, and you'll be sitting on the edge of your seat waiting to see how the game will turn out...

Kouhai
QUOTE (julezia @ Apr 07 2009, 04:50 PM)I've seen most of Mitsuru Adachi's other series Touch (one of his many others), so I knew that Cross Game would also be a quality anime, but I didn't expect the debut episode to be THIS good. I totally agree with you Barbo, that not many animes can pull this type of beginning off. After it ended, I was just staring at the screen while the ED was playing, in awe because of what I had just seen. lol
I'm not the biggest fan of baseball either, but somehow Mitsuru Adachi manages to incorporate it in a way to get you into it. You want the hero to win, and you'll be sitting on the edge of your seat waiting to see how the game will turn out...

Same thing happened to me. I just stared at the screen while the ED was playing. Everything just happened too fast that my mind needed time to digest the events. DAMN THAT WAS ONE GOOD EPISODE!
O

Sempai
I agree with you guys, the first episode was pretty damn outstanding although very sad as well. I was skimming over the thread and I just ket hearing how good you some guys though it was so I decided to check it out and pretty glad that I did since I really enjoyed it.

Blooming flower, please tell me
Why do people fight and hurt one another ?
C

Kouhai
Oh so, the creator of Touch, Mitsuru Adachi, is also the source of Cross Game.

That would explain why I kept thinking that this is just like Touch. I am relieved to know that Cross Game isn't the work of a copycat.

I am now looking forward to the next episodes. I am confident that I will enjoy them. As long as it doesn't re-hash to much from Touch, that is.
M

Retired
The second episode was quite good. Aoba is a definitely quite the tsuntsun at this point. Ah man, but that flash back... Wakaba-chan is just tooooo cute

Seems like Kou is training quite a bit, and he'll get to show off the results of that training in the nest episode.

Retired
I have no problem with tsunderes generally, but I wish Aoba would stop looking so bitter all the time, she's so cute when she smiles, like at the end of the ED for example, but she never smiles during the show... arrghhh... so frustrating

Kouhai
Wait... did anyone find that there are no subs in the second eps

Retired
There are subs. Be sure you have the CCCP codec pack and are using a CCCP approved media player (I like Media Player Classic myself)

Also, if you only watched the opening theme, that itself isn't subbed. Everything else is subbed though, well other than the ending theme.
M

It is a troll sub made by Shiki because they're angry that their work was uploaded onto streaming websites.

I advise FTV admins to take episode out of the database for now until a proper group (Minor ja Nai, ANBU, or Anime Central) releases it.
E

Kouhai
yeah episode 3 is a troll, dont get it
D

Retired
Shiki is a perfectly good sub group, and I understand Shiki's frustration - the troll was not intended to be uploaded everywhere (he post a warning on his site before uploading the troll and then uploaded it to only one site) - other people reuploaded his torrent like morons to various other sites including TokyoToshokan and AnimeSuki (where FTV fetches the torrents).
That said, the troll should be removed until Shiki releases his official subs later this week.

QUOTE (Shiki)
1. I did not release the torrent for the troll to anywhere except Datorrents.

2. I was not near the computer after the troll was uploaded.

3. I warned people about a incoming troll earlier in the day, sorry if you weren't warned.

The troll was not meant to just get back at those redistributing the content or the re-encoders. In actuality was meant to get back at those who have been vulgarly insulting Shiki-Subs, I have been requesting certain sites and a few sites complied but for the most part I get insults like "gook" and "Jap". There are many alternative groups except Shiki-Subs, upload content from those who allow it. This is a one man fansub group for the most part, many people have been flaming and insulting Shiki-Subs before the troll. I spend my only couple of off days of the week to work on Cross Game and don't appreciate the disrespect and I'm not looking for popularity or respect, I'm fine with just providing a fast decent quality release without all the special effects, and a release that doesn't take one week.
If you were wrongfully trolled by this release you have my deepest apologies, the troll was not meant to be seen by the loyal fans at Tokyotosho. Those who are angered by this troll and do not wish to download from us anymore is perfectly fine, a real release will be released later today for those who wish to enjoy Cross Game.
Don't forget, the edit and search buttons are your friend!