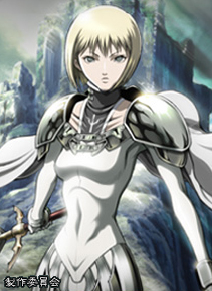 Title: Claymore
Kanji: ã‚¯ãƒ¬ã‚¤ãƒ¢ã‚¢
Premier: 3 April 2007
Producer: Madhouse
Official Website: Claymore
Synopsis (AniDB):
The setting of the story is a fictional world of abundant towns where humans coexist with demons called Yoma. These monsters feed on humans as their main source of food, hiding themselves in human society until they strike.

A group of skilled warriors form a nameless organization to protect humans from these demons. These warriors are called Claymores, after their immense Claymore weapons. They willingly infuse themselves with demon flesh and blood to become powerful half-human hybrids. Villages in danger of attack hire warriors from the organisation for protection.

The story of Claymore follows the adventures of the beautiful Claymore warrior Claire, who fights demons and struggles to hold on to her humanity.

Long ago, the Yoma, the shape changing demons, took human form to live in disguise among human society. They feed on human innards, and take possession of memories from the brains of people they eat. These acquired memories help them better disguise themselves within human society.

In recent years, a secret society discovers a way of implanting demon bodies and body parts into humans, to create hybrids more powerful than the original demons. Hybrid`s standard abilities include faster healing, limited shape modification, the ability to detect other demons and hybrids, and overall enhanced physical prowess. Almost all hybrids are created against their will; they are typically survivors of families attacked by demons. The only exception is the lead character, who volunteered to become a hybrid to avenge her family. The society sends hybrids to towns that can afford their fares to kill demons, although not every hybrid does so willingly (this is implied in the manga.) The society is often strict and harsh; hybrids who break the rules risk being hunted down by their fellow hybrids.

This series have a high chance, but the problem is that the anime in this spring is gonna be A LOT. From some source there are about 50 animes that will be released.

Actually, after seeing the picture I was not interested in this story at all. The girl is not cute and kinda warrior type. (strangely, I do like saber from FSN too lol). But after reading the synopsis, I might give this series a chance. It does looks interesting.

EDIT:
I forget to mention that this anime is adapted from manga with the same title. The manga itself is licensed by Viz Media. Claymore Manga Thread

Retired
OMFG they're finally making the anime for this HELLZ CHEA!

I call Claire! She's my evil yoma-killing woman! BTW when is it due to premiere?

I call Claire! She's my evil yoma-killing woman! BTW when is it due to premiere?
FTW! One more to add to my list

@hamasusuke: Premier date: look at the post above yours lol

Retired
dammit hama just took my Clare! I guess I will take Claymore#9 Jane, she was one of the best character I loved in the manga.

You know who should VA Clarie's voice? Ayako Kawasumi, cold-hearted yet a gentle voice that fits the character totally...This is my most looking forwarded serie in Spring 2007.

Anyway, here is the screenshots from the anime. (should be from eps 1). I got it from GA japanese site.
I put all of them in spoiler tags, in case there is some people who does not wish to see it.

@MKK: Does not mean to disappointing you, but the seiyuu of Clarie has been confirmed. It is Houko Kuwashima. http://www.animenewsnetwork.com/encycloped...ople.php?id=281

Retired
QUOTE (jul10 @ Mar 02 2007, 11:11 PM) @MKK: Does not mean to disappointing you, but the seiyuu of Clarie has been confirmed. It is Houko Kuwashima. http://www.animenewsnetwork.com/encycloped...ople.php?id=281
damn....NOOOOO....I was hoping for a stronger voice because Houko-san's voice is pretty high and a bit older tone.

Retired
I'm definitely gonna be checking this one out. I started some of the manga and I really liked the story of what I read, but the drawing completely turned me off, especially people's faces. But looking at the pics jul10 posted they seem to be looking better. Can't wait for this to come out.
<p>

Retired
Yup this was the third and final thread that I was gonna make tomorrow (meant to be today).........ah well, good job Jul10 but I really wanted to do this one....I know a bit about it.

Claire the Claymore looks like a blonde Tokiko-san (from Busou Renkin).

All I will say this anime's manga is really really really cool.......lots of action, itsy bit of romance, revenge and some really sad stuff........especially when an awful lot of Claymores get killed and when they(don't read its kind of a spoiler as in what could happen to a Claymore but I've made it really vague though.....) get "Awoken" .

Most of the claymores are female in this story but there are some male claymores.

MKK-sama's girl is Jean (and not Jane, MKK

Retired
QUOTE (hamasusuke @ Mar 03 2007, 07:08 PM) I'm blind then.
Wait a sec... wouldn't you go for the VA who acted for Saber? And when Claires in her "yoma" berserk form, you'd pick any evil guy from mortal kombat? XD jk.
what? 3rd and final? dude, I counted over 10 new threads you made since last night!
In the general anime discussion thread...i stated that I planned to do three more remaining new anime threads the day after (today) but the thing was that I said that jul10 and DSL might end up making the ones I had to. So to counterattack to all this.................I made even more new anime threads today.......about 9 new threads today..............I've still got 2 more but I'll do that another day. I've finished editing most of the new threads I made....only GR and Eco Eco left to do.

All of them are in Japanese though, so don't bother if you cannot read japanese (like me)..

Retired
Well I don't need to look at the pics for this one. After reading the summary it has gotten me interested enough. I like the whole hybrid concept. Combining demon powers and humans makes for a delicious plot. And once again i am a sucker for the adventure type anime where swords and violence rule as the order of the day. I'm in a state of xD for this one.
D

Retired
The artwork in this one looks very good. And that girl looks tough as hell. This show has me pretty hopeful for when it comes out. I hope it's really good as I don't want too many disappointing anime's this spring. I read somewhere that around 40 or so animes are airing this spring. If that's true that's completely insane.

Retired
QUOTE (DarkSkyLady @ Mar 04 2007, 03:30 AM) The artwork in this one looks very good. And that girl looks tough as hell. This show has me pretty hopeful for when it comes out. I hope it's really good as I don't want too many disappointing anime's this spring. I read somewhere that around 40 or so animes are airing this spring. If that's true that's completely insane.Â

Yup, this anime better be good....or I'll go scream at the director when I go Japan..lol.

Anyone, got an idea of how episodes this is supposed to be ?

Yup, this anime better be good....or I'll go scream at the director when I go Japan..lol.

Anyone, got an idea of how episodes this is supposed to be ?

ByeBye
What are the remaining two series? I don't feel like counting through all the threads right now. I might be able to salvage some information.

No amount of episodes has been currently announced, but Shinsen and Rubel have considered to sub this series when it begins airing on April 3, 2007.

Retired
From what I've read and the events took place, the manga have roughly 24-26 episodes unless they have the Teresa chapter like 6-8 episodes. But the manga is only up tp chapter.69 and that's I believe isn't even close to the ending, so I think the production will either stick with the manga and do an OVA or they will tell the story in a different format like Black Cat and add filler episodes which I hated. I think the latter choice will what's going to happen but considering the screenshots from JCDRANZER, it looks like they just might stick with the manga....

Retired
unless they're way behind in the manga and already got the story plot down, then they can do the anime before the manga is even finished! probability of that happening: 12-20%.

If there are fillers in this anime, first thing I'll have to kill is MKK.

Retired
QUOTE (hamasusuke @ Mar 04 2007, 04:32 PM) unless they're way behind in the manga and already got the story plot down, then they can do the anime before the manga is even finished! probability of that happening: 12-20%.

I think I read few chapters of manga but then the group translating the manga dropped it so I never bothered to look for another group... hmmm
<p>______<br>
Have problems with viewing files? Please try downloading <a data-ipb='nomediaparse' href='http://www.cccp-project.net/'>CCCP</a>.<br><spanstyle="color:#FFFFFF;">I'll save you world! I'm half way done with my anti-stupidity that acts just like anti-biotic! I'll free you someday.</span></p>
D

...*sigh*...it's tiring even to read all of the synopsis of the new animes...and I don't even know what's what in my anime lists anymore....

But lots of senior members give a high expectations for this series,so I'll defintely going to try it!

(never read the manga before...I don't even know there's one!...I wonder if I've live in the different world up till now..?

(it must be because noob-sama has snatched all the lolis away!

lolis is a must nowadays!