Staff member
Leader Council
QUOTE (lavenderdays @ Jan 24 2012, 01:34 PM)Looks like the design for the original saber (male) was recycled and redesigned onto Fate/Extra as Gawain. Other than that the male Saber now reminds me of Arthur from the Merlin TV series thanks to his hair.

but I prefer the design of the Heroine in Fate/Extra, she sooo reminds me of Makise Kurisu

I wouldn't mind if it went this way though, interesting to see a VN/eroge with a female lead

that's right Gawain is based of the called Archetype "Saver", after all both weild the holy sword Excalibur with some modifications... btw besides him and his master Ayaka Sajou (the one who was calling in the last seconds of Carnival Phantasm's final episode) just found some sketches of the other archetype servants and masters

Rider Perseus (replaced by Medusa in FSN, his master is the one laid in a bed)

Staff member
Leader Council
Okay Ryu-chan with you finding those now makes me wonder if they Fate/Prototype series might actually see the light of day here.

The up side is we get a completely different telling of this war with some similarities still seeping though when they remade it to Fate/stay night. I get this feeling that this was supposed to be a light novel only but somehow was recycled into an ero and non ero Visual Novel, anime, and manga.

Besides if this does see the light of day it might just be made into an anime or manga, or both if we're lucky.

The only down side to this is the Tsukihime Visual Novel remake will still not see the light of day over this. So isn't it sad Sacchin the Fate side of the Nasuverse has higher priority over you actually obtainning you route for once.

Retired
QUOTE Okay Ryu-chan with you finding those now makes me wonder if they Fate/Prototype series might actually see the light of day here.

Meh, might be curious, but it'd probably end up somewhat of a female-side harem series, akin to Hakuouki...

I'd rather have them animate Kagetsu Tohya

I'd rather have them animate Kagetsu Tohya

You mean to tell me that you want to have animated the same day Tohno-kun dreams about until he fully makes his "contract" with Len-tan?

Oh speaking of Len-tan they finally had her sitting on Housewife Caster's lap like she was her child to begin with.

I mean if you put those two together you would of thought they were mother and child anyways. Although I kind of wonder what it owuld of been like if she was with Tsundere-chan White Len-tan.

Anyways seeing that some of the respected characters from Fate/Zero making a sudden last minute appearance in the end pretty much showed that this was showing the whole side for Fate there. Although they really do need to make a Tsukihime/Melty Blood anime since, to me it's something that happens to be laking in the Nasuverse as of late.

Retired
Yeah, I guess Tsukihime universe stuff is too brutal/extreme to be animated properly and still gather large audience. I mean FFS, reviewers have complained about KnK being too graphic, and Tsukihime would have to be even worse.
<p>

I approve of this. Needs more Len.

Staff member
Leader Council
Oh yeah I liked that part since White Len-tan actually had her speaking role for once. Ah sometimes I think she likes being known as the Tsundere Len-tan at times.

Although I wonder what would happen if they did the fusion of Len-tan and White Len-tan, would that make her into Grey Len-tan or something?

before that probably Heavens Feel and Hollow Atarxia get animated...which wouldn't be bad either but I really wanna see Len as well...

In any case I really enjoyed Carnival Phtanasm, I hope we'll see a continuation of it in the future...esepcialyl with featuring the charas from Fate Extra...damn that game is just beyond awesome 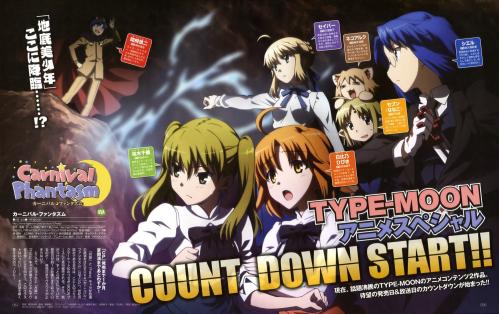 Necropinion: almost a year necrobump only to announce HibiChika's special ^^ a Carnival Phantasm episode released on the Type-Moon Fes 10th anniversary event but it's still raw, when i have a chance i'll watch as soon as it's subbed so i'm looking forward to see more seasons/OVAs of this crossover series and other nasu-verse adaptations I've heard of this but wasn't this actually released back in July 2012??

Staff member
Leader Council
The first season was back late in 2011 or so if memory serves. I mean ti was oringally an OVA series they pulled together, and from what Ryu-san just posted it looks like we may get more anitics from the side characters that never had a route at all., and were just side characters.

Staff member
Leader Council
Well with after watching the HibiChika special I have to ask this one question, and that's which side are those girl's on becuase I feel like I never seen them before on either side of these antics here.

Not only that but seeing that they even did the Back Alley Alliance skit once more was rather nice. Not only that it was good to see Sacchin in a rather cheerful state seeing that people still like her and all.

Also, not only that but they even managed to show the the Main Heroine skit when they did that online poll. To think that it would of ended badly either way for those two. Personally it was a good thing they did the Date Everyone Route since not only was that funnier it was also a good way to show that Tohno-kun and Emiya-kun can survive trying to deal with everyone at once here.

Staff member
Leader Council
QUOTE (JCDRANZER @ Jan 19 2013, 08:10 PM)I've heard of this but wasn't this actually released back in July 2012??
QUOTE (Kid-Wolf @ Jan 31 2013, 11:08 AM)Well with after watching the HibiChika special I have to ask this one question, and that's which side are those girl's on becuase I feel like I never seen them before on either side of these antics herethey are two new characters created for the Type-Moon Official Mobile Site and All-Around Type-Moon, not sure if Mr. cellphone can be called character or not but as seen here their usual gag is that Chikagi breaks him apart everytime it makes her mad ¬¬ ...about release date i read in some sites that was screened on the 10th anniversary event back then and I edited the quoted pic by adding more info above ^^

Staff member
Leader Council
Oh yeah I also forgot they even started this epsidoe off with the old Lancer Dies joke a la South Park style it would seem too. Although Carren-sama showing up and just giving a huge stack of money only means she was working at the chicken farm sorting out chicks again.

In any case Cellphone-san is technically most likely Takeshi-san himself... more or less. Not only that but they took quite a few jabbs at Nasu-sama being slow on working on the Tsukihime Remake it would seem.

Nopt only that but I kind of liked seeing the Tsukihime characters as chibis since you normally get to see the Fate crew as chibis. That and Kohaku-sama misdirecting everyone about it not being anything about the Tsukihime remake, but more along the line of it bieng the HibiChika special instead.

not only that but they even managed to poke fun at how Saber-san is technically the cash cow of the entire Type-Moon Franchise as well here.

- Miko Miko Mode Oni Version
You must log in or register to reply here.