45 replies to this topic 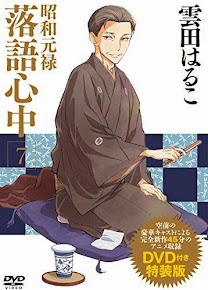 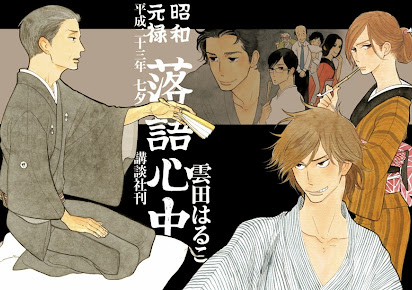 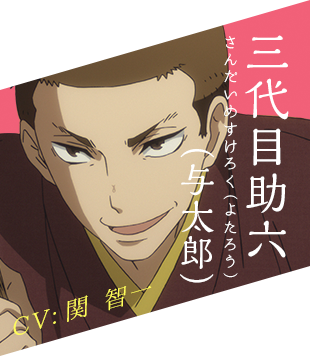 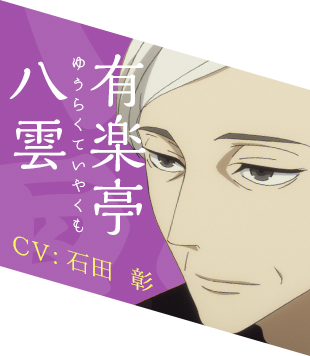 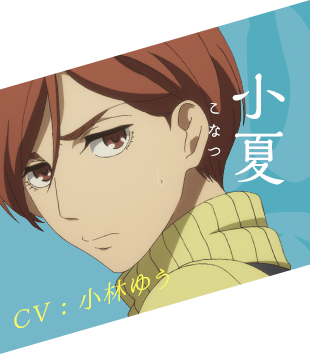 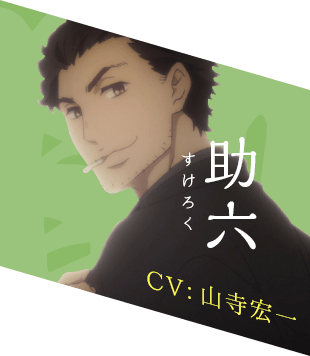 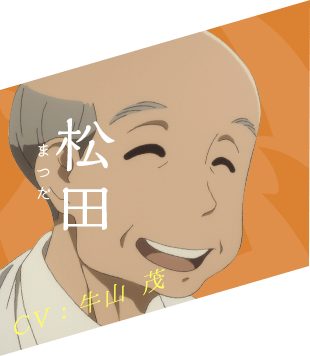 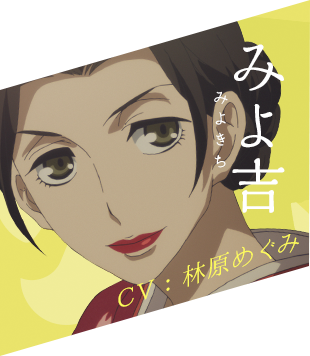 Synopsis: The year was 1970s. When a certain man is released from prison, he knows exactly where he's heading first. After falling in love with a traditional comic storyteller's rendition of the story called "Shinigami," he is determined to become his apprentice. The performer, Yakumo, has never taken an apprentice before, but to everyone's surprise, he accepts the eager ex-prisoner, nicknaming him "Yotaro."

As Yotaro happily begins his new life, he meets others in Yakumo's life, including Yakumo's ward Konatsu. Konatsu was the daughter of a famous storyteller, and Yakumo took her in after her father's tragic death. Konatsu loved her father's storytelling, and would love to become a performer in her own right—but that path is not available for women.

at first I didn't expect much, but studio Deen impressed me this time! 50 min

So easily the biggest surprise of the season. This is a show that I had 0 intention of watching any part of. It's not the typical type of anime I usually watch and didn't really know what Rakugo was (though that doesn't take long to figure out once you start watching). I only decided to try it out from the comments on the ANN Preview Guide forums. Many people were speaking very highly of this first episode so I kinda had to give it a shot. Didn't take long to figure out why people liked it so much as it turns out to be one of the best first episodes in this season so far. Although to be fair, the only competition it has from new, non-sequel, series is ERASED.

This is indeed a surprise. This series is interesting with a really nice story. Kyoji's performance was fun to watch and all the other characters seem to have a deeper meaning to what they do. I am sure to keep watching this series

The expanded synopsis seems to have all the required elements of male/female relationship with the additional 'master' element placed within cultural context, which can add some depth on many levels, even for non speakers if translated well, which is always key in such literary/poetic/storytelling formats.... limitations of females in society is there with the historical elements... lots of potential if used. I've heard a good comment on it already... I'll have to check it out... though, I must say, I would prefer to watch a whole season when convenient to me, rather than one episode at a time... something that I think the industry will shift to soon (if not for all that cosmic crap headed our way)

... but then, such events make great stories for later generations.

[ on translation, I was thinking of this: Laughter and Tears: The Complex Narratives of Shōwa Gesaku Writer Nosaka Akiyuki , which shows the depth of meaning available if the translator really understands the culture and writing styles, the author, et al. I had to pay for that one, but it was worth it, just wish it was longer, as it really filled in the details of his life and that semi-autobiographical story: Graveyard of the Fireflies... the real story was worse, as is said, 'dying is easy, living is hard'] Perhaps this type of anime using rakugo, could touch upon those kinds of wounds? I really don't know much about rakugo, and this anime would be a good introduction for most people, abroad and native... not sure how much of it is still popular in modern culture that focuses on youth, like most anime.

from what i remember another recent tv anime about this topic, is Joshiraku by Studio Shaft animated back in 2012... better known for the ongoing Monogatari series but i only tried ep'1, because JR felt more like a parody with cute girls

Just watched the first episode... interesting. Good use of the rakugo stories in the plot of the anime as it develops/unfolds as do the characters. Main character more comical than I thought, but then I really didn't have any expectations, so... anything goes... interesting.

agreed and with ep.2 now makes sense why Kikuhiko, 8th gen Yurakutei uses a cane then pick kyoji as 1st disciple... reminding him to his rival Hatsutaro (later Sukeroku), by its Pv i think the next will be about love interests in their youth

This episode 2 was also very good. To see the difference between the two disciples made it indeed very clear why Kyoji was chosen. Kikuhiko and Sukeroku couldn't be more different in performances (nice way to show it by giving the viewers an example

) and character. I wonder if the next episode will show the reason why the hidden sadness came to Kikuhiko when mentioning Sukeroku..did they both like the same girl...?

@nd ep took a dramatic turn.... though it did end on a rather light note. Interesting character development, a look back for exposition or will the story develop linearly from there for a few eps until we cut back to current timeframe? Or a back and forth as needed? Still, nice character setup... really adds depth as well as a sense of the historical period.

yes was sad to see how depressed is Kikuhiko in ep'3, World war II as the main reason to break up with 2 nice girls... still great that Sukeroku and their master returned, you may be right about a love triangle after Miyokichi debuts

A bit slow, this episode, but you really get a feel for the potential use of subtilty in the serious guy's persona, as he develops slowly into what later becomes a recognized master of the form. The funny guy is funny, charming etc and is ready-made for the comic arts, but the serious guy has to find a way, his way, as his sensei tells him... he's picking up little hints and tidbits from everyone around him and will have to synthesize it all at some point later on as he comes into his own, and it seems his roommate and teacher are purposing helping him discover himself, the rakugo artist within... if there really is one... and even the geisha friend is now on the assist team. He really is the MC in this show... so far anyway, before they return to the present timeline. I like that closing song..... really fits well.

Also I'm liking more its opening sung by a veteran seiyuu, Megumi Hayashibara ^^ if's like Studio Shaft animated it... about her in ep.5 she's great still helping him embarrassed, reluctant but at last got public attention dressing as geisha

Just watched that last ep... this show has a real nice groove to the writing... fits that music from beginning to end.... the traditional touches in the music fit in so nicely as well... lots of characterization but the writing always turns to a performance to tie it all together by the end... and we see the main character finding his rakugo... nice to watch... well written, performed et al... very smooth.

after each week i'm more interested to find its OST, for me the ep.6 highlight is when he's asked 'why am I doing rakugo?'... Didn't realize as it just became his passion, until Sukeroku's 'to fill people with joy' like at Manchuria despite war

This is a very artful work... for adults, how rare is that? This one doesn't have kid written all over it like most, but is definitely targeted to adults I would think... not sure when it airs in Japan, but so far, this one is a very rare find, of course, there is still the issue of whether you like the story, characters or not, but this one is really well put together from every angle. The storytelling is well written in the characters work, life, passion or lack of... the pair of opposite in the 2 rakugo artists.... the sure-footed, knows what he's doing, comfortable within his skin vs the opposite in our MC.

I liked not just the personal realization of himself, but in how others words are starting to mean something to him from previous discussions, as he doubted himself and what he wanted to do, seeing how he wasn't attracted to this like the happy-go-lucky guy. How many of us 'know' what we want to do at that age? If so, how many have that drive to do it?

The pace comes and goes like the storytelling with the personal realizations about himself... we see the MC develop, whereas the other guy just is... so far, and most likely till the return to the present time...

soon I hope ;/ aside Yotaro i miss Konatsu in this story, i rather prefer Past and Present taking turns like Bokumachi... now ep.7 with Kiku on a roll he is so cold toward Miyokichi, that her jealousy could start Sukeroku's tragedy (synopsis)

Most of the episode seemed like a filler until the end... hard to tell what he's thinking regarding her, but the thing that stuck out to me was that he didn't tell her that he was leaving on that trip... not exactly a close relationship is it? They were never seen as 'close', not really, though she did seem to play with him, while he never seemed to reciprocate her apparent affections, so either she isn't his type, or no one is... or he's looking at her from a perspective of someone who grew up in a geisha house... so doesn't take any of the 'performance' as real? Either way, he tells his roommate, but not her, so that says quite a lot.

Others have said that there's a lot of non-manga filler in this episode, 75% or so... and that this is season one and the creators hope for a second season pickup...if I understood it correctly. Still a nice episode, but like an inbetween chapter in a book, setting up the next episode/chapter. His roommate is still the same, planning to break free from the elders control, working independently like they did with the previous play. Nice setup though, hopefully the next episode is worth the setup. Do we know how many episodes there will be this season?

supposedly 13 :/ the 1st from 2 extended OVAs, many scenes skipped on TV so let's hope for both to be subbed... ep.8 shows why Kikuhiko didn't tell Miyokichi about his trip, they love each other yet its PV hints a twist with Sukeroku

Yeah, no english subs yet on the OVAs.

Until this series ends i guess ;( at least Kiku as shin'uchi, a dramatic ep.9 didn't take longer to be subbed... now rejected in revenge Miyokichi is with Sukeroku, expelled from the rakugo association so finally their little daughter will appear