25 replies to this topic Synopsis: What's a hero? For Izuku Midoriya, the answer to that question has always been simple: "Everything I want to be!" And who is the ultimate hero? Well, the legendary All Might, of course. All Might is the number one ranked hero and also the "Symbol of Peace" in the world. Not in his wildest dreams could Izuku have imagined that he would soon cross paths with his childhood hero... In Boku no Hero Academia, status is governed by "Quirks"—unique superpowers which develop in childhood. But, unfortunately, hero otaku Midoriya "Deku" Izuku never had a Quirk. That is, until he met All Might, the greatest hero of all time. Izuku's transformation from dreamer to superhero begins at Yuuei Academy, the top-ranked hero-training high school in Japan. Izuku is on cloud nine when he's accepted to this prestigious academy, especially when he finds out that All Might is one of the teachers. What surprises does this mighty academy offer? And will Izuku be able to keep up with his elite classmates?

his attire color reminds me to Gon from HxH too, Midori means green after all

I for sure will be watching "Boku no Hero Academia"!

Kind of like a Japanese version of "Kickass", but where most other people actually have super powers.

Hey, that one reminds me of Naruto... that kid in green, Rock Lee... who had to work harder to keep up due to not having the same powers... or something like that...

also by seeing ep.1 and Batman V Superman film, I think the respective human protas have more merit lacking quirks... improving themselves in a world full of superbeings, so it'll be interesting to see how izuku can help All Might next ep

Okay, it ain't a bad series. It feels to be a really simple story though. Hopefully the hero academy with all the different students can make it better.

Well up to ep.2 some villains and heroes are barely introduced, except All Might or Deku who just knows his weak alter-ego... So most likely it'll pick up until he passes at E.U, pun for Eiyuu (hero) ;p i guess Ochako will be his love interest


I watched the first 2 episodes. By all accounts this series should be high up on my list but it is not clicking with me. Reading about the author Kōhei Horikoshi, he was in the same generation as Oda and Kishimoto, but only now has just gotten his big hit. This is probably why I dont like the series. I feel like the series is very manipulative and insincere. The guy has spent a decade studying the action genre and designed a shounen by committee. With the premiere episode, you can smell every shounen trope that ever existed in one episode.

The best thing I can say about this series is it does an excellent job of pretending it has a heart and soul.

i think it's too early' to tell by only 3 eps aired, while we aren't aware on what'll happen without reading the manga... Neither one of my very top TV animes yet so far I prefer it than OPM, unless Deku gets OP after training 3 mere years


I don't really feel it's pretending though. There's no arguing that it covers just about all of the hallmark properties of a Shounen Jump property, cause it absolutely does. But to me the show feels sincere and not just a checklist of what made previous big shounen titles a success. The aesthetic and character designs are quite unique and make it stand out from many other titles (hard not to laugh and love All Might's not so mighty design). My only real nitpick is some emotional reactions feel like they are ratcheted up to 11 when they don't really need to be that high. Not enough to make me not enjoy it though.


This is the thing that really bothers me the most. To me it comes across as so manipulative.

I'm quite aware that I'm begrudging the author for not being a commercially successful genius straightaway but it just doesnt feel authentic to me.

despite this anime keeps exaggerating expressions / emotion in ep.4, I'm liking the story and character development... over OPM which got better animation or designs, yet to think Deku passed with secret 'rescue points' thanx to Ochako

Courses for horses I suppose...

I don't begrudge you for how you feel, and it isn't like I couldn't stretch to see your point. For me, I see it as a return to innocent romanticism. A pure heart and dedicated effort can make all the difference in the world, even when the rest of that world seems to conspire against you.

In truth, it's a measuring stick that I wish to God I could measure up to personally. I try, but never to the degree that Deku does. But it is a great model to TRY and emulate. Kind of like the premise of Greek heroes in mythology. It's an ideal for mankind to aspire to, even knowing that they will likely never match it, but the true beauty is in the struggle of every man/woman to do so anyway...

But then again, I could see how someone would just look at me as an overly-romantic old fool...

couldn't post it better! This stands out for me too, especially in latest eps of the epic shonen Ushio & Tora's final cour... after ep.5 i say Deku's wit is like Joseph Joestar, learning fast to control his power by fingers (dat homeless teacher)


I do think it has a heart and soul but it certainly does exaggerate the despair of Deku, especially when he was like 4 years old and had that blank face on his chair with his mother pretty much saying you can't become a hero. When you logically think about it, it's a pretty shitty situation and I would be definitely upset if I was in his shoes but then again he was 4 years old (I don't really remember myself at that age), I was a little surprised he remembered it so well 12 years after. It just means that it was a huge deal for him and it still is, it was the first time where his confidence and aspiring future crumbled before him like when you find out Santa ain't real as a child.

Is it a manipulative scene? Probably, you need to keep your audience. Is it insincere? Nah, it happens all the time across all types of media. It's one of the many branches that become the backstory for a main character.

I like it so far but I'm not too attached to it so far. However, I really really like the soundtrack to this anime.

actually not me ;/ i like how they're dealing with a league of villains, until Ep'11 that All Might finally arrived to save the day... ok 2 eps more but most likely S2 will be planned, at least when enough manga material is done (9 books so far) 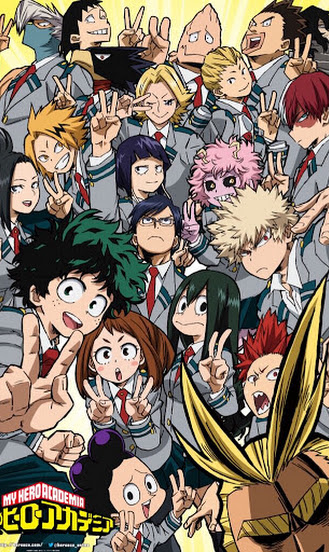 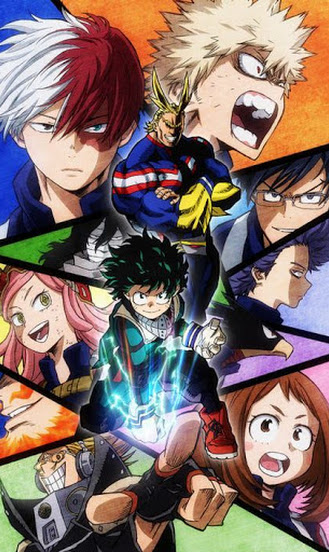 Hey, that one reminds me of Naruto...

I just compared both after a filler today, main reason why i dropped naruto

Saw this on someone's watch list.... in 3rd season or whatever.... what is the opinion now? The premise reminds me of so many of course, but mostly of the Disney live action film... Sky High... but in that, the kid has 2 superhero parents.... there are so many of these magical academy projects each season... was it that way before Harry Potter reflamed that flame? I'm going to check it out... from the sound of it, I need to just allow the first few eps to set things up?

My Hero Academia 3rd Series, again bits of ep.1 are recap but less than S2 #0! 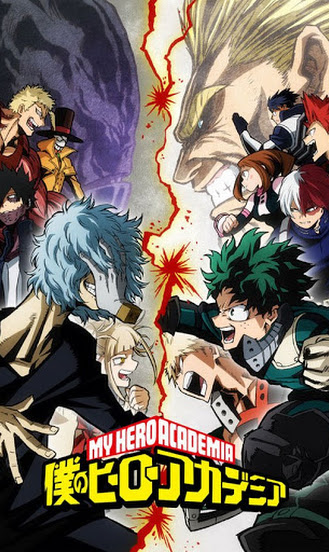 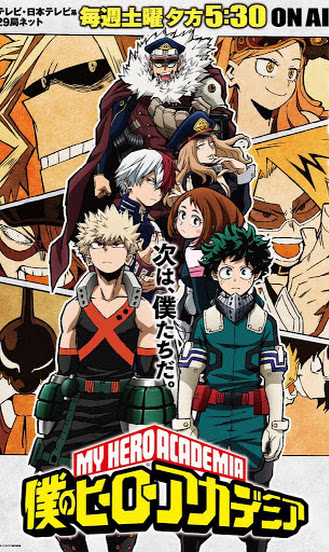 Saw this on someone's watch list.... in 3rd season or whatever.... what is the opinion now? The premise reminds me of so many of course

i'm liking it, despite they keep reminding us names and quirks since S2

On ep 5... I can see what everyone means about using every tool of the genre.... Green Lantern parallel just showed up.... but not in a bad way... as it provides background for the situation rather well... and fast, since the viewer already knows it from the others... so far, it works... reminds me of Tiger and Bunny at times too... though this is targeted to the young boys... can't think of the name... shonen? Pretty entertaining so far. Rather obvious that other guy from his school seems destined for a villain role later... unless they want to give him the redemption/remorse role... for team deployment ...later.... after encounters etc...

Rather good use of the genre so far.... only dif is whether our MC is a male or female in the humor.

On ep 5... I can see what everyone means about using every tool of the genre.... Green Lantern parallel just showed up.... but not in a bad way... as it provides background for the situation rather well... and fast, since the viewer already knows it from the others... so far, it works... reminds me of Tiger and Bunny at times too... though this is targeted to the young boys... can't think of the name... shonen? Pretty entertaining so far.

i still consider All Might vs. All for One from the best eps, not only in this S3... but the whole series and superhero shows alike, can't wait to go see its film


1 user(s) are reading this topic