87 replies to this topic 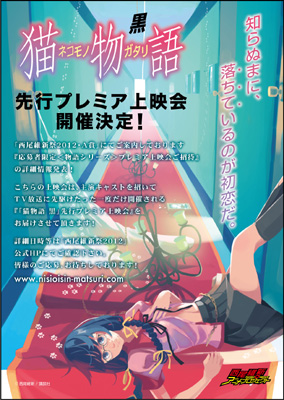 Necropinion: just watched the trailer of these two Bakemonogatari prequels so I hope this winter 4-episode special, movie and TV series coming next year turn out even better than Nisemonogatari... also I expect them to finish the entire saga with adaptations of Tsukimonogatari, Owarimonogatari and Zokuowarimonogatari afterwards ^^ Ex: High - PS: 9/10

Actually after seeing the first epsidoe of Nekomonogatari (Kuro) I can wholy state that it is actually a flashback before Bakemonogatari started. So in other words this is a prequel if you will. Not only that but they even stated it in the episode itself as well of this being a prequel

Well starting off the new story arc we more or less go with a conversation bit with the last story arc left off. by that I mean Araragi-kun speaking with Tsukihi for the time being over his feelings towards Haekawa here.

Also, from the looks of things the Kuro (Black) epsidoes are the 4 parter while the Shiro (White) episodes will most likely be the TV series here. Still after this storyline is done we might get into seeing Shinobu in her mature adult form along with the other random antics that caused him to become a current psudo vampire if you will.

Each one takes place in different season/holiday as noted above

Then I must of misunderstood the editing you did with Ryu-san's post there then.

Well in any case they had a second epsidoe out as well and pretty much we not only got to see Oshino back in action with his explainations but also seeing Shinobu obtaining her love for doughnuts as well.

To think that Araragi-kun actually influenced her into looking like a loli that would do almost everything he asked of her. Although this does explain as to why she really liked toying with him in the Nisemonogartai episodes she was in.

I just watched the batch release of Nekomonogatari: Kuro and it was just awesome, reminded me of how much I missed intelligent dialogue and the humour of the Monogatari series with the SHAFT flare to boot.

Hanekawa in underwear is awesome, the subtle incest portrayed in the first quarter of this mini-series was hilarious, Araragi is going to fall into the depths of hell eventually with his antics.

I think the reason Araragi proclaims that he will never say "I love you" to Hanekawa is because he respects her too much and that he feels he is not good enough for her. I understand the logic since she helped him a lot during the Spring Vacation when he was having Vampire problems and despite falling in love for her, he won't tell her but instead live a life of where he is constantly and eternally grateful for her to the point of willing to sacrifice his life for her.

Darn I like almost all the girls in the Monogatari series and I can't choose who to ship with Araragi.

I wonder what "Nekomonogatari: Shirou" will be about, obviously the reappearance of the White Neko inside Hanekawa.

The ending credits make me hopeful that SHAFT might actually animate all the novels of the Monogatari series, I mean they're planning to release Kizumonogatari as a animated movie and so once that's done, SHAFT would have animated 6 volumes of the novels, there's over 15 volumes for that series, well, 15 confirmed volumes but they're could be 1 or 2 more than that since the Monogatari series is still ongoing.

I agree that the dialogue is very good indeed. That made this series (and all the previous ones) very strong. However i found Hanekawa as a character not too interesting. Compared to the conversations with Tsukihi, Karen, Shinobu and Oshino her actions/remarks felt weak. Senjougahara and all the others in the previous Monogatari series were more interesting for me.
For me this large batch was certainly not better than the previous series so compared to that i just give a 7 out of 10.

I agree that the dialogue is very good indeed. That made this series (and all the previous ones) very strong. However i found Hanekawa as a character not too interesting. Compared to the conversations with Tsukihi, Karen, Shinobu and Oshino her actions/remarks felt weak. Senjougahara and all the others in the previous Monogatari series were more interesting for me.
For me this large batch was certainly not better than the previous series so compared to that i just give a 7 out of 10.
I should have probably given a lower score but the fact that it's part of the Monogatari series, I just felt compelled to give it a perfect score despite knowing that Bakemonogatari was the best out of the 3 and that Nekomonogatari was the weakest with Nisemonogatari nestled in the middle but a very close 2nd to Bakemonogatari imo.
after marathoning all four episodes I found subbed today i'm with you guys about this arc is weaker than the first series, besides the reasons you already mentioned it really feels the lack of Senjougahara's presence and other girls who appear afterwards... I hope Kizumonogatari film turns out even more interesting despite its fewer cast already seen here because we will know about the origin of this story, what happened with the antagonists seen in flashbacks & obviously Shinobu's real form Kiss-Shot Acerola-Orion Heart-Under-Blade ^^


I agree with everyone except remember Hanekawa character seems weak because we are basing off of the other characters.

I imagined once all of them are done and they are viewed in order. She won't seem as weak.

Monogatari Series: Second Season, just a little update so there is no need to split this into a new thread :3 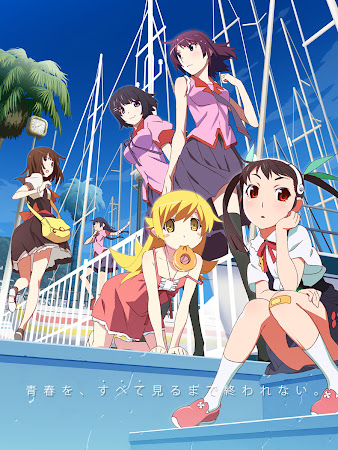 I think she'll appear in the Kizumonogatari movie too ^^ there's no official release date in japanese theaters yet, or in BR/DVD after so many years it was announced but next month she'll star the first arc of the 2nd series: Nekomonogatari (Shiro)... Edit: just watched ep.1 and it's already getting more interesting than (Kuro) even without Araragi, is it karma for going all pedobear on Mayoi? -.- but is compensated with Gahara caring for Tsubasa with yuri suggestions; Ex: very high - PS 10/10 wow July 7 is her b-day! what a happy coincidence (makes sense because her sign is Cancer "Hitagi Crab")

Of course it is upsetting, and I would want to help someone I knew in that situation even if we weren't really friends... but it was unexpected. I didn't think they had any sort of relationship before this point.
Also wtf was up with her sleeping in the hallway? that's messed up... we already knew her parents were terrible, but I didn't expect that.

Well it seems that we finally got the first episode down, and form the looks of it I'm liking how Senjogahara decided to help out Hanekawa here. I mean finally it seems like those two needed to be under the same roof for a while here since these two are kind of the bombshells of this very series here.

Although I have to laugh as how Senjougahara pretty much was making those yuri-like comments and then stating she wasn't going to act like Kanbaru and go full yuri on her.

Well, at first I was a bit disappointed that my least favourite character was getting the attention for the first arc, but then Gahara's involvement made it sort of worth it. Still, waiting for that Hachikuji ark :3


Hanekawa is your least favourite character? For realz?!

I don't understand the appeal of Hachikuji, though I admit I like her a lot more now than I did initially in Bakemonogatari. If I had to name a least favourite character it would probably be Nadeko. I don't know why really.... maybe because last year her "innocently" trying to seduce him irritated me? Actually I found Nisemonogatari in general to be disappointing.


Well the thing is Mayoi-chan is the kind of girl that can pretty much bring out the inner lolicon from most guys, initially. Then later on she makes a pretty good manzai partner with Araragi-kun though. Heck even when she teases him on mispronoucing his name tends to make her cute at times.

She's the genki loli, what more do you need? :3

Nadeko is yeah... nice for doujins, not so great as an actual character. Hanekawa I find kind of boring, and she's not really my type.

I think the rest of the Aryaryagi family sort of kept my attention in Nise, but yeah, it wasn't QUITE as good story-wise. The random ramblings and musings were still fun though.

@Ausdoerrt - How do you make those Monogatari sigs? I like the latest one with Senjougahara and Hanekawa

The latest episode did not disappoint, as Black Hanekawa emerged to confront the tiger. I was surprised that she encountered Senjougahara as well, I was hoping for that but I wasn't sure if it would happen.
This was a dialogue driven episode, and I didn't fully understand Gahara's point with Hanekawa eating plain food. I'm guessing she was addressing how she doesn't have any preferences because with her family she took whatever was given to her and didn't ask for more. Senjougahara also mentioned something about food with certain spices give you a taste of "home," and Hanekawa's food was lacking that.

Also Senjougahara having an Elektra complex?! I did know she was very close to her father, but I didn't think sleeping in his futon would excite her so much lol.

A bunch of screenshots and Adobe ImageReady

I used to make all sorts of anime sigs back in the day, you know.

That... may have been a joke. After all Gahara-san was just trying to lure Hanekawa to share the same futon with her.


As for the episode: glorious fanservice. Glorious.

I also thing you got the point of that conversation mostly right: Gahara-san is basically commenting on how Hanekawa is so apologetic/passive that she'll take whatever comes her way, and wonders whether a person who doesn't HATE anything could really LOVE anything.


Ahh you're right. She did ask her in the end if she really loved Araragi-kun. That is a valid question, because even though we know she definitely cares for him, I don't know if she loves him in that way.

Also I'm still in shock that Senjougahara and Hanekawa have so many scenes together. I thought I'd never see those two in the same room, never mind living under the same roof, taking showers together and sleeping in the same futon

Those were my thought exactly but I still think Hanekawa do really love him and Ghara is trying to get her to stop just accepting any and everything and actually say/get what she wants.

btw the the fanservice made me watch the episode twice

All hail BRFCFC!!
Back to Animes