Gonna be of great interest for sure, wee-chan...I look forward to it but am sad at the same time since after tonight, only one episode left and then we are to be kept waiting until next year. Ah well...time flies quickly so before we know it Season Three and all it will share will be upon us.

In the meantime, Lord Tyrion is in love and desperately so...while King's Landing burns...and rightfully so.


they'd be catching up rather swiftly if they chained the next season like this. I think I have an idea what the season finale is.. and if they don't use that I wonder where the hell they're going to leave it chronologically.

Sounds rad...I have my episode ready to go and will watch it later tonight. I did get a message from my dear friend, senpai-kun, where he tells me some of what took place with episode nine.

Interesting thing is there is one character who makes off with another character as I always suspected he would if things got tough. As to how it happened and why well, let me take a gander later to judge for myself. One character was always at the right place at the right time and seemed to care for the other character despite his odd and "grizzly" appearance. Anyway...be back later to speculate further.

Will be watching episode 9 right after my exam...I've got it downloaded in beautiful 720p.

I watched episode nine last night...the battle was rushed but was interesting like all battles tend to be. Let's see, backstabbing, fear, cowardice, (on full display), betrayals, idealistic heroism...(that rarely, if ever, works).

Lots was said and many died...my favorite scene was towards the end...Papa Lannister walks...no, strides into the throne room...regal, handsome (love his baby blues), full of victory...his battle attire is what legends are made of...silver breast plate with a red sash while he looks impeccably groomed and all the more victorious...one does have to give credit where credit is due and he looked every bit the part to motivate the men onward to victory.

As much as I admire Lord Tyrion, he just did not cut it in that clunky battle attire...his wits serve better behind the curtain while eyeing everyone in court.

Great episode...one thing that just bothered is, Cersei's eyebrows are so HUGE and she plays her character very well with being a total wackjob, doting mother, cruel but at the same time can be a brave woman and she showed that near the end of the episode, where she wanted to kill her son without pain if the capital was sacked.

I somewhat lol'ed when Tyrion got his face slashed by Joffrey's men, like he thought he got saved by one of them, smiled for a second before almost getting killed and then finally saved by Pod, who's actually 12 years old in the books.

Hmm 'some of joffrey's men'was actually one of the whitecloaks in the book. pod was pretty bad-ass. I think he killed like 5 knights defending tyrion


That made my day (well the start of my day)...I have my last exam of this year about to start in less than 4 hours. I'm glad I checked out FTV, I needed to bring my spirits up and this just did it.

So I was hoping an activity more in this thread being S3 premiered last week, That said I have not watched it yet. However reading and some skimming of the books (ebooks actually

) I already know what s3 has in plan ahead xD.


Other than I STILL RLY wanna watch it but alas Tis' such ol' Troubled times for I, burdened with heavy loads of looming responsibilities.

Other than that Fantastic Song from the trailer.

Season 3 started off in good fashion. The series is such an epic that I actually need a "certain mood" to watch it, I saw the 1st episode several days after it aired and I'm doing the same for the 2nd episode, I know it's out but I just can't get myself to watch it.....weird, yeah I know.

Currently watching a plethora of shows at the moment like Hannibal, Bates Motel, Arrow, The Following and a few others.

I just marathoned the first four episodes over the last weekend, and loooved them. Especially the last one with Dany proving once again how badass she's become. Dracarys

I saw this and had to share, thought it was awesome: 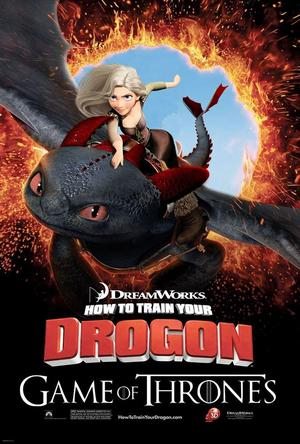 There are some changes in the tv series compared to the books, but I don't mind them because it makes it interesting for those of us that have read them already. Plus I've read A Storm of Swords quite a while ago... but it is my favourite of the series (so far) so I hope they do it justice.

I personally feel dany is sort of overrated for a character, Some of her actions even in the later books tends to give me a 50-50/60-40 of like and dislike for her respectively. Id say Im more of a grey area for her though. But dont get me wrong that I "Hate" her she is after all within of my favorites.

Arya is definitely my fav character throughout the show/books. Incredibly witty even though for a fact she is a young girl. Has even the balls to kill.

John Snow coming in the third.

Daenerys / Jaime Lannister for the 4th in tie

Hmm I do see what you mean about Dany, I am on the fifth book right now. She isn't my super favourite, but I still like her. She is my fave female character, and I hope she wins the throne

I like Arya too, but its been awhile since I read an Arya chapter... and Sansa is getting more likable as the books go on.

My fave characters at the moment are the Lannister boys: Tyrion and Jaime. My fave scenes in season 3 are with Jaime and Brienne. I liked their back and forth banter... but now things are already turning sour

Indeed Dany is a disappoint in the latest books. Her rise to power and her strong will apparently are not enough as she suffers from her family's bad illness. Pride, she tends to be overly prideful that it affects her decisions. Sometimes she feels no different from her brother Viserys the only difference is she is caring and has a moral compass. She's a good person in heart though so she makes one of my faves too.

Speaking of the targaryens I'm really lovin bout the speculation about
(Warning for those who havent finished reading ADWD/Book 5 yet)
Jon snow's lineage.

its only a speculation but its convincing actually (Rhaegar+lyanna). too bad Its uncertain if he still lives at the end of book 5 though Im willing to bet he is still alive.

Oh Tyrion has been awesome since the beginning.
Witty, cunning and almost has a supply of jokes for the moment. Him and his Sell Sword plus his squire in the latter parts make the hilarious Trio or Three stooges of King's landing although mind you when they mean business they do get it done

Despite being a Lannister he has a good heart and Kind under that "Imp". His journey with John snow showed that and his disposition towards people harmed by his family's policies. Plus that bitch slap on Geoffrey made him awesome.

Jaime has been neutral of the sort in the beginning but showed "some" decency. Excluding the part where he is the reason for Geoffrey and Bran's cripple. He is one of the few who can be a honorable at the right moments . His fight with ned stark especially in the TV series where he displayed anger to the soldier who interuppted. His sympathy and care for his "Imp" Brother. Later on he gets more awesome as he reinvents himself with Brienne.

So, the 2nd episode of season 4 aired last night....spoilers are coming now.

So, Joffrey is finally dead and I'm glad that they didn't mull over it and got it done. Funny that only his parents came to his rescue, everyone else was like "WTF" or "We gotta leave now". Poor Tyrion, this is only the beginning for him, it's gonna be a very tough week for me now.

A brilliant finale. Man, we gotta wait another year for the next season.

So I have marathoned GoT up to season 3 and wondering what the point is. I tried to watch GoT in 2012 and gave up halfway through season 1. But people kept hyping this series up so I thought I was missing something and forced myself up to the end of season 3.

GoT is in no way bad...infact on many levels it is impressive but I wonder at what point does a world become too arbitrary to even bother with it. I have other technical problems with the story but w/e.

One thing I can say is I absolutely despise Daenerys character. My favourite character is Jon Snow... as soon as he dies I will probably stop watching.

Wise move, franzoir-san, as I am of the same opinion. He is the only one with any real character growth/development and promise of remaining sane (though only by a hair

)
I like that he is proud, honorable, and realistic. Everyone else seems to be out to feed their ego with more power (gasp! does that include the Dragon Mother/Queen) and to line their pockets with more gold. The impression I came away with this season is "anyone who gets in their way, well, kill or be killed" is their motto.

Ah! The only other exception might be the Imp...but then again, he is just barely hanging on.

Is there a specific reason as to why?

Back to General Discourse