32 replies to this topic

when you get all of them to talk it out in a scene it feels like the seiyuus are just right, its like there is some weird harmony xD, so far i think Centorea was the only one where i think she sounded different than she would.

I'm glad this is doing so well, the manga deserves it, its a good adaptation and most of all its fun as hell to watch.

All thats left now is a game

So Mon is indeed a nice group of monster girls.

They did a pretty good job although they had a strange strategy. Something feels a bit weird about the group. The cyclops and the big girl seem normal but the zombie girl acts like she is agressive. The weirdest though is the doppelganger. Why do i get the feeling she ain't exactly normal. Of course her not wearing clothes is one thing but she seems way too relaxed.
That was a nice intro to the spider girl. To have a homestay family who doesn't like spider sure is sad for her. It does explain why she is so mad...finally getting a homestay and then being hurt like that. Still she does have a personality which ain't clean either so probably she is a bit too blame as well. Looks like the house is getting more interesting

Surely it would be a galge (sim) if released officially but in case it's not, i'll expect dojin (fan) versions as far as eroge xD... back to ep'8 I like how Racknee protects Honey-kun without violence, but overall morphing nurse Suu is the most helpful


I meant visual novel, but ok

Also, Arachnea and Kurusu, seems like a match made in cobwebs (altough i ship laMIA)
I wonder why there are so few people with legs fetish >_>

aren't galges or eroges like VNs? ¬¬ the only other leg fetishists i recall, in anime are Kars (JBA) and Amor (SSΩ) xD... so Mero can stand and hop as a maid, more MGS parodies and Draco debuts in ep.9 but 'D' until next time (still Suu rules)

Well, this series seems to be going down the ecchi road fast. It feels like the writer is slowly ran out of ideas so decided to introduce characters who just focus on being ecchi. The dryad and the demon girl both fits into that category. There was a chance to make it a bit more serious with the remark to Rachnee but it was not used.
Hopefully the writer can get the series a bit more balanced in the next episodes.

Still ecchi yet it improved now that MON girls date BF-kun, with Halloween near they fit to join his harem too in ep.11... 1 left but finally he finds D-ullahan Lala in a bizarre way, especially Suu and Rachnee toying with her headless body

Hmm... Nah, that would never happen, I am actually still following the manga (currently Vol8) and there is absolutely no change in it. It does find ways to make an in-between story/arc for one of the monster characters, but the ecchi is still always the main attention of it

Back to reviewing^^, I did enjoy seeing this series being animated. I don't really have any problem with voice casting and all, but it is still saddening how the comedy gets reduced the further it goes, although that has the reason of : What most male viewers want syndrome, behind it... so, not really much that can be done about it :(

Overall, my rating for Monster Musume no Iru Nichijou: 6/10
Animation: 7/10 (Let me specify, that I mean normal animation movements and not... jiggle moves >.>, which as shown in last episode ALOT, they really cheaped out.)
Story: 5/10 (... It's a harem with Monster girls... What story?)
Characters: 6/10 (pretty much forgettable, they all get their introduction, but afterwards they are like balanced with the rest at screening time... which makes it also chaotic)

Back to all my comments in nutshell. I like this series, I like seeing it being animated, but I have always got problems about its concept, and don't ask me : *Then why are you still reading the manga?* No, I enjoy reading it because I like to see the male protagonist Suffer, that is for me the only redemption part of this series.
Harem of girls : With a bunch of near death experience for the male protagonist, that's what I find to be the true comedy part and the only reason I actually started reading and watching the Manga/Anime.

comedy compensates it for me xD nice finale, is there anything Suu can't do?... so like darling-kun the series can't die yet, also Lala will stay in their home in s2

Well with the way things were for this series I'm expecting this to get a second season to expand on the girls now. Although the manga itself is kind of released once every two months if memory serves. So far it's in the mists of the Mero Story Arc now and it seems to be a lot of fun. Still Lala is always amusing to see with her chuuni abilities at times.

Everyday Life with Monster Girls SP, no S2 yet at least new episode after a year! 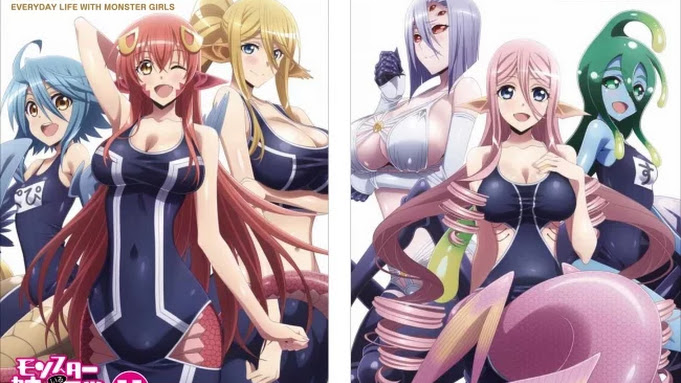 Still Lala is always amusing to see with her chuuni abilities at times.

lol they still mess with her head (literally), fun Miia vs Mero at Polt's gym pool

lol they still mess with her head (literally), fun Miia vs Mero at Polt's gym pool

Fun to see the OAD, apart from the amount of fanservice. Second OAD in April 2017... Why not just give Lerche studio the money for a remaining 10 episodes and lets get S2 going!?

If sales figures are to be true. This is one of the most best sold manga + Anime series of 2015, with only 1 season so far.

It's like the old question that is: Why is there no: The Devil is a part-timer S2?

And please... don't comment on that question... I have had too many responses to it earlier this week...

Fun to see the OAD, apart from the amount of fanservice. Second OAD in April 2017...


1 user(s) are reading this topic